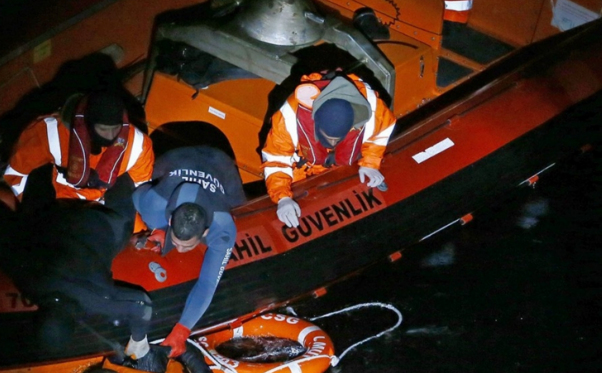 At least six children died and eight other people were rescued Tuesday after a boat carrying migrants and refugees bound for Greece capsized off Turkey's western coast near the city of Izmir, local media reported.

State-run Anadolu Agency said the coastguard found the bodies of six children including a baby, adding that the migrants on the boat were Afghans. It was not immediately clear how many people in all were on board.

The migrants were apparently hoping to make it to the island of Chios from the resort of Cesme despite bad weather. The boat sank after wooden reinforcements used to fortify the boat came apart in the sea, causing the boat to take in water and sink, Anadolu said.

More than 500,000 people have crossed into Greece this year, according to the United Nations. Many of them are fleeing conflict in Syria or Iraq. Nearly all have entered the country from Turkey, paying large fees to smuggling gangs who arrange their crossings in small, overcrowded boats. As many as 600 people have drowned this year in the Aegean Sea, including dozens of children.

Turkey has stepped up efforts to stop people from leaving for Greece by sea, and last week, authorities rounded up around 3,000 migrants and asylum-seekers from Iran, Iraq, Afghanistan and Syria in the town of Ayvacik — north of Cesme — which is a main crossing point to the Greek island of Lesbos.

The sweep came after Turkey and EU leaders agreed to re-energize Turkey's long-stalled bid to join the 28-nation bloc and bolster their resolve to deal with the Syrian refugee crisis, although authorities wouldn't say if the detentions were directly related to the Turkish commitment to help contain the flow of migrants.