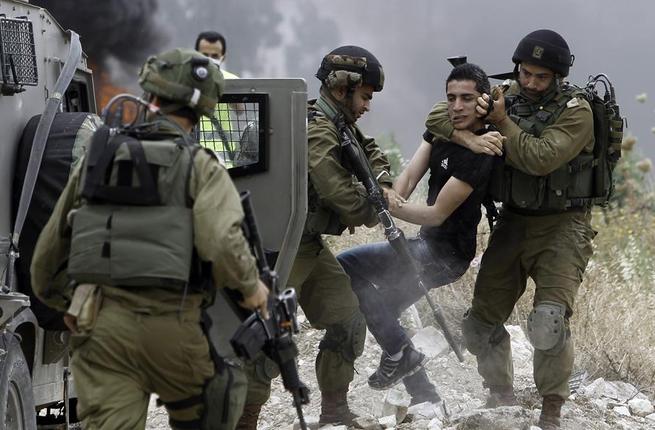 It has been 100 days since grassroots, mostly youth-led protests broke out in Jerusalem, in reaction to increasing Israeli incursions into and restrictions on Islam’s Al-Aqsa Mosque. Since then, mass protests and individual attacks have spread across the West Bank and into Gaza and communities of Palestinian Israelis.

The story told primarily by the international media is one of Palestinian stabbers and Israeli retaliation in self-defense. However, as the Euro-Mediterranean Human Rights Monitor documents in this 100-day report, proven Palestinian attacks are relatively small in number and often committed by lone youth, while the number of arrests, harassment and executions committed by Israeli forces are increasingly excessive and disproportionate.

As such, the behavior of the Israeli military constitutes violations of international law, and thus Euro-Med Monitor demands that the United Nations and other international bodies, as well as governments doing business with Israel, act now to pressure Israeli authorities to stop the abuse of human rights and end the root cause of the unrest: its decades-long occupation of the Palestinian territories.

This report covers the period between 1 October, 2015 and 8 January, 2016, relying on photos, videos and eyewitness testimony. Data collected indicate that 150 Palestinians, including seven women and 27 minors, were extrajudicially executed, with Israel refusing to release the bodies of 24 to their families. In contrast, 27 Israelis, including one woman, were killed by Palestinians.

In addition, 15,759 Palestinians were injured, 92 seriously—including 58 journalists and 103 emergency medical personnel. Among Israelis, 385 were injured, 33 seriously.

Two-thirds of Palestinian victims—95 of 150—were executed in Jerusalem, the West Bank and the border area of the Gaza Strip during protests or immediately upon detention. Many were killed merely on “suspicion,” including those falsely accused of trying to attack Israelis.

In mid-October of 2015, Euro-Med published a video recording showing eight Palestinians being arbitrarily executed by Israeli forces. The UN special rapporteur called on the UN to launch a special investigation into such extrajudicial killings.

In addition, Israeli forces stormed civilian hospitals nine times, allegedly searching for Palestinians who had committed illegal acts during protests. The most serious incident took place when tens of Israeli soldiers, disguised in plain clothes, stormed the Ahli Hospital in Hebron on 12 November 12, 2015—killing Abdallah Al-Shalalida and abducting his cousin. In a similar incident on 29 October, more than 60 Israeli soldiers broke into the charitable Al-Maqasid Hospital to break up a demonstration staged by doctors protesting the frequent Israeli storming of the hospital.

Euro-Med Monitor has found that the Israeli organization Magen David Adom (MDA), recognized as an emergency medical aid agency by the International Committee of the Red Cross, frequently gives top priority to the treatment of injured Israelis, while neglecting critically wounded Palestinians. This discrimination is a blatant violation of medical ethics and the code of conduct to which all physicians ascribe.

In addition, in a number of incidents, Israeli soldiers dealt with wounded Palestinians inhumanely, allowing them to bleed for hours without providing medical treatment. In some of these incidents, soldiers interrogated Palestinians while they were bleeding on the ground.

Euro-Med Monitor contacted the administrators of Magen David Adom 30 days before issuance of this report, providing documentation of five cases in which its medical team failed to treat injured Palestinians on a timely basis. However, no response was received.

Demolition of Houses and Damage to Other Property

Euro-Med Monitor has documented 352 assaults on Palestinians and their properties. During the 100 days of the coverage period, 92 homes were demolished as collective punishment of families with relatives accused of attacking Israelis.

Attacks on Israeli Individuals and Properties

Palestinians attacked Israeli individuals or property an estimated 227 times, ranging from knife stabbings to car rammings. The most common incident, however, was stone-throwing by Palestinian youth. These incidents primarily occurred around checkpoints and on streets linking Palestinian cities and villages. They resulted in the death of 27 Israelis, including one woman, and the injury of 385 others (33 of whom were seriously wounded).

Since the escalation of protests in October 2015, 3,401 Palestinians have been detained—58 percent more than during the same period the year before. About half of these detainees, 1,511, are minors. One in every 3 of these detainees was exposed to cruel treatment such as beatings, humiliation, hand-cuffing and blindfolding.

As an occupying power, Israel is obligated under Article 27 of the Fourth Geneva Convention to ensure the safety and security of civilians from. Euro-Med Monitor now is communicating with the United Nations to urge it to launch a comprehensive investigation with the support of the Security Council or, if vetoed, the General Assembly. Signatories of the Fourth Geneva Convention are obligated to investigate and prosecute perpetrators of crimes such as those described in this report.