Euro-Med Monitor Calls for EU Treatment of Refugees as Humans, Not a Burden 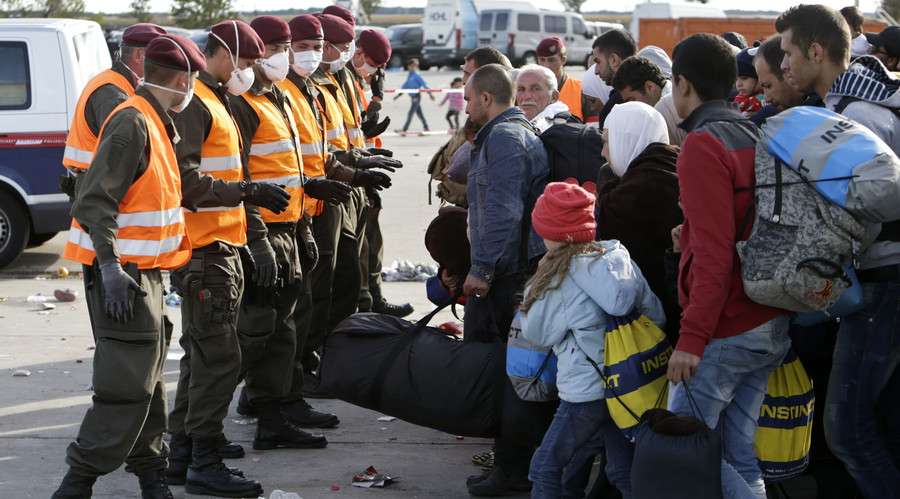 Geneva - The Euro-Mediterranean Human Rights Monitor calls on EU leaders to forge a common strategy to ensure respect for human rights alongside economic and security concerns. "Since the beginning of 2016, Europe has been punishing refugees fleeing to its shores," warns Euro-Med Monitor.

“Although European countries received more than 1 million asylum seekers last year, this is far fewer than the number that nations neighboring Syria and Iraq have been forced to absorb,” says Ramy Abdu, PhD, chair of Euro-Med Monitor. "They are still receiving other numbers of refugees although they suffer from economic conditions, perhaps worse security and less stability than European Union's countries live.

Countries such as Lebanon and Jordan, which more immediately border the crisis zones, are far less able to support the refugees until they can safely return home, says Euro-Med.

Examples of the harsh, restrictive measures taken by European governments as virtual punishments of people already traumatized by war include:

At the beginning of 2016, Germany legalized the confiscation of refugees' valuables to fund the expense of housing them. In the state of Bavaria, valuables exceeding 750 euros in worth are confiscated; in Baden-Württemberg, the threshold is a slightly less 350 euros. German authorities also have limited family reunifications, suspending them for up to two years.

With the prominent rise of anti-refugee political parties, refugees now are exposed to more frequent and more serious assaults, including arson attacks and property destruction.

In 2015, German police documented more than 1,000 attacks on refugee accommodation centers, a 500 percent increase compared to the preceding year.

Five hundred Austrian soldiers have deployed at the Spryfield border with Slovenia. The deployment is part of a plan, also adopted by Germany, to conduct tougher identity checks of refugees crossing through Austrian soil to Scandinavian countries.

Austrian officials have stated that 50,000 refugees will be deported because their asylum applications were not accepted. In addition, they decided to halt their open-door policy, instead imposing a limit of 37,500 asylum seekers who will be allowed in during 2016.

Forty-three incidents of arson targeting refugee shelters have been documented by the police since July, among a series of hostile events organized by extremist right factions against refugees. One of the worst of these occurred when a gang of masked men distributed leaflets threatening attacks on immigrants; later, anti-racism protesters were assaulted in Stockholm.

Recently, the Swedish government has taken strict measures against asylum seekers. Forty-five percent of applications (about 80,000) were rejected in 2015, with the intent to deport them. Since the beginning of this year, authorities have monitored the border with Denmark to verify travelers' IDs and prevent illegal immigrants from entering the country. This monitoring of the border is the first in half a century.

Sweden also has announced a number of restrictive amendments, scheduled to take effect in April. These include granting refugees only temporary visas, renewable every three years, and one-year visas to those deemed eligible for “subsidiary” protection. “Subsidiary protection applies to those who would be at risk of serious harm if returned to their home country, but who do not fit the strict definition of a refugee

Denmark took similar actions on its border with Germany in an attempt to avoid accepting refugees denied entry to Sweden. In January, the Danish Parliament adopted a law allowing the confiscation of asylum seekers’ possessions to "fund their stay in the country.” Under this law, money and other possession valued at more than 1,340 euros will be seized. The law also includes other provisions that narrow accommodation conditions and extend the time required for family reunions.

In attempt to discourage refugees from coming to Denmark, the Danish government published a number of ads in Lebanese newspapers warning immigrants of the difficulties.

Hungary took similar steps earlier. In an ad published in Lebanese newspapers, the Hungarian government warned refugees against illegal entry to its territory and imposed a penalty of up to three years  in prison in addition to deportation. The Hungarian parliament approved new legislation in September to increase the authority of the Hungarian security forces and the army when dealing with immigrants who are trying to enter the country, allowing them to open fire on immigrants to protect the border.

In the wake of the rapid increase in the number of asylum seekers arriving in Europe last summer, Hungary built a barbed wire fence on its border with Croatia extending 41 kilometers, and another one (175 kilometers) to stop the flow of immigrants.

Following the same strategy, Slovenia erected a 670-kilometer wall along its border with Croatia to prevent the entry of immigrants. In some cases, authorities used pepper spray to disperse refugees trying to pass through the territory to Croatia.

The Interior Ministry of Finland declared its intention of expelling two-thirds of asylum seekers (about 20,000) who applied during 2015.

Incitement against refugees has gone viral on social media in the Netherlands. This incitement emerged concurrently with attacks on refugee accommodation centers and a delay in considering family reunification requests of up to 18 months.

The Jomast company, a subcontractor for security conglomerate G4S, painted the doors of refugees' houses red in Middlesbrough, making them a target for abuse. The company claimed the action was carried out with no discriminatory goal.

In Cardiff, Wales, asylum seekers were forced to wear red bracelets to get food. However, after comparisons were made to the treatment of Jews in Nazi Germany, the company involved reversed its decision.

In France, opinion polls show a growth in the popularity of political parties that adopt stringent policies toward asylum seekers and migrants. These opinion polls concluded that more than half of French adults (56 percent) oppose entry of refugees. At the end of 2015, there were several attacks on refugee accommodation centers, including a fire set in the refugee camp in Calais, northern France, which is inhabited by about 6,000 mostly Syrian and African asylum seekers. Three refugee camps for Syrians and Iraqis have been subjected to similar attacks in the past three months.

In light of this cruel treatment of asylum seekers, the Euro-Mediterranean Human Rights Monitor calls on European leaders to act with urgency and mercy to address the critical issues facing refugees, rather than merely act in self-defense. Each refugee is a human with internationally recognized rights, and European leaders have a moral mandate to ensure their safety, security and dignity.

“The concerned parties should develop consistent standards to ensure a reasonable level of economic and social security for refugees," says Abdu. "That, necessarily, means shortening the waiting periods required to obtain a residence permit, to reunite with their families and to receive sufficient financial support."