Lebanon: Arrest of human rights attorney is unacceptable ‘chilling’ of freedom of expression 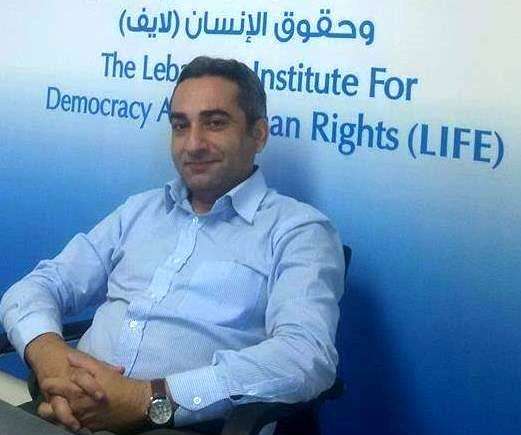 Geneva—The arrest of Nabil Ali Al-Halabi, general director of the Lebanese Association for Democracy and Human Rights-Life, by the the country’s internal security forces must be internationally condemned and his release demanded, says the Euro-Mediterranean Human Rights Monitor.

The security forces stormed Al-Halabi's house Monday morning, terrorizing his wife and young children as well. He was reportedly arrested at the request of Interior Minister Nihad Al-Mashnouq on charges of libel and slander, after he and his office manager, Maher Abu Al-Khdoud, filed two lawsuits against him.  The interior minister also asked the Bar Association to suspend the immunity from prosecution normally accorded to lawyers and heads of human rights organizations.

The complaints against and arrest of Al-Halabi occurred after he posted his political views on Facebook, charging the ministry with failing to seriously investigate a human-trafficking network. In addition, Al-Halabi had appeared in court to respond to the lawsuits, and requested a postponement to allow him to retain a lawyer.

“This procedure against a lawyer and human-rights advocate is a continuation of the policy of repression and restrictions on freedom of expression practiced by the Lebanese authorities,” says Mira Bishara, a Euro-Med Monitor researcher.  “This must stop. Activists and opinion leaders must be able to freely and publicly express their concerns. Al-Halabi must be released until it is proven he actually violated the law.”