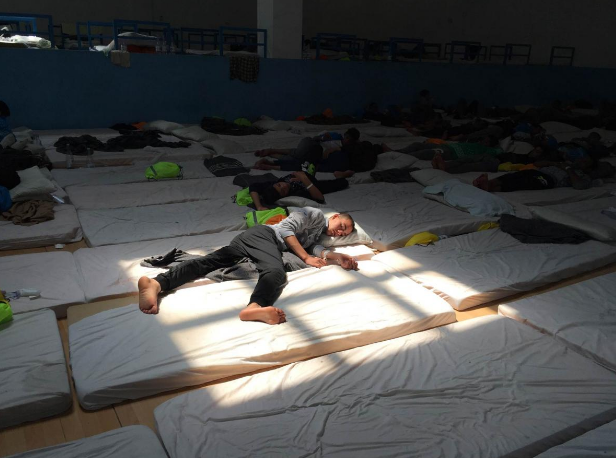 (Milan) – Children as young as 12 and traveling without family members are kept for weeks in overcrowded and unsafe conditions in the Pozzallo migrant registration center in Sicily, Human Rights Watch said today. Some asylum-seeking and other migrant children stay for over one month with unrelated adults in the center, designed for short-term stays, due to lack of space in shelters for children, putting them at risk of sexual abuse and violence from adults.

Members of a parliamentary commission of inquiry on reception and detention facilities is conducting a long-planned visit to the Pozzallo center on June 23, 2016. As of June 21, all but 60 people had been transferred out of the center.

“Pozzallo is no place for a child, much less for extended periods of time,” said Judith Sunderland, associate Europe and Central Asia director at Human Rights Watch. “It is unacceptable that young, vulnerable children without family members remain there for weeks, while adults are normally transferred within three days.”

The center, an European Union-designated “hotspot” for screening asylum seekers who arrive in Italy by sea, has one large main room and a smaller room in the back, which is intended for families and unaccompanied children. Due to chronic overcrowding, however, children are forced to sleep in bunk beds or on mattresses on the floor in both rooms near unrelated adult men. There are separate, adjacent bathrooms and washrooms for males and females, but no separate facilities for children. Toilet stalls are separated by shower curtains, not lockable doors.

Registered adults and children over 15 are allowed to leave the guarded center between 8 a.m. and 8 p.m., but unaccompanied younger children have to stay inside the building or in the adjacent courtyard.

Four Eritrean girls, aged 16 and 17, said that adult men constantly harassed them. Bilen, 17, said men “come when we sleep, they tell us they need to have sex. They follow us when we go to take a shower. All night they wait for us… They [the police, the staff] know about this, everybody knows the problem, but they do nothing.” Sesuna, 16, said she had thrown herself on her bunk bed when she first arrived, on May 28, because she was so exhausted. “A man came near my bed, but countrymen [Eritreans] stopped him,” she said.

The Pozzallo center is ill-equipped to properly treat traumatized children. Children at the center and at other migrant and asylum-seeker facilities in Italy told Human Rights Watch that they had experienced or witnessed brutality, including sexual violence, on the land route through northern Africa and shipwrecks at sea. Mehret, a 16-year-old Eritrean girl, explained in a halting, soft voice that she had been raped near the Shagarab refugee camp in Sudan. She had been staying at Pozzallo for two weeks, but had not spoken with a doctor or anyone else about her trauma, and no one had inquired as to whether she had experienced violence or abuse on her journey. “If they don’t ask me, what am I going to say?” she asked.

A doctor at the center told Human Rights Watch that reports of sexual violence by female migrants and asylum seekers were common, and women or girls who request help are sent outside the center for medical care.

Two of those interviewed at Pozzallo said they had witnessed a shipwreck in late May. Robel, a 12-year-old Eritrean traveling on his own, said he was on the deck of a wooden fishing boat that was pulling another overcrowded boat in the attempt to reach Italy from Libya. “Our journey was good but we saw the others die,” he said. “The other boat we were pulling sank and we had to cut the rope.”

Human Rights Watch interviewed two other witnesses to this tragedy in other centers in Sicily. “I haven’t talked to anyone about it,” Robel said. Prior to our interview, he said that no one had asked him about the experience.

Terres des Hommes, a nongovernmental organization, has run a mental health project for children and pregnant women in the Pozzallo center since June 2015. The psychologist said she works there three days a week, but the organization lacks a private space for consultations. One-on-one conversations often take place in the corridor or courtyard.

The psychologist said many women and girls are sexually abused on the journey and described a variety of mental health problems among the children, including depression, psychosomatic symptoms, nightmares, and paranoia.

A dozen children who had arrived at the end of May 2016 told Human Rights Watch they had not been able to contact their parents or other relatives to tell them that they had survived the journey. The center gives all new arrivals a phone card with 5 euro of credit, but on June 9, the only phone in the center was broken. The phone had been broken for about two weeks, staff at the center said. The phone was fixed only on June 22, the day before the parliamentary committee’s visit.

The 2010 EU Action Plan on Unaccompanied Children states that it is “paramount to separate minors from adults to prevent (re)victimization,” adding that minors should be provided with appropriate accommodation; detention should only be used in exceptional cases.

Delays in transferring children appear primarily due to the chronic lack of capacity in dedicated shelters for unaccompanied children. Four short-term first-arrival centers specifically for children operate in Sicily, but none of them are close to Pozzallo, one of the main disembarkation points for rescued boats. The number of free places for unaccompanied children at longer-term centers is unknown because Italy does not have a national database. Save the Children and other humanitarian organizations have long called for the Italian government to create such a database to facilitate transfers. Mario Morcone, head of the Interior Ministry’s immigration department, recently proposed a more efficient and equitable distribution of responsibility for unaccompanied children throughout the country.

The number of lone children applying for asylum in Italy has increased steadily in recent years. In 2013, children submitted 805 applications, while almost 3,800 did so in 2015.

The Pozzallo center has been a first arrival center for years, but is now one of Italy’s four fully-functioning hotspots set up at the behest of the EU. Officials from Frontex, the EU’s external borders agency, work in the centers to assist Italian police with the initial registration, nationality screening interviews, and fingerprinting. European Asylum Support Office officials are also present to identify individuals eligible for relocation under the EU program to transfer asylum seekers from Italy to other EU countries. Italian nongovernmental organizations have expressed concerns about access to information about rights and the asylum procedure in Italian hotspots, including Pozzallo.

Doctors Without Borders ended its health project in the Pozzallo center in December 2015, to protest the authorities’ failure to address overcrowding and lack of protection for vulnerable people, including children traveling on their own.

Local and national authorities should take immediate measures to ensure that children traveling on their own are placed as quickly as possible in suitable facilities where they can access the care and support they need and to which they are entitled under national and international law, Human Rights Watch said.

Italy should establish a first-arrival center specifically for unaccompanied children near all ports experiencing significant arrivals, including Pozzallo, and ensure sufficient places in longer-term facilities. The creation of a national database and a clear system for distributing children in need would facilitate swift transfers.

The European Commission should ensure that unaccompanied children are not held in EU-sponsored hotspots for longer than what is strictly necessary and that the operation of these hotspots is consistent with the EU Action Plan and international human rights law. Staff and authorities at Pozzallo should immediately ensure that unaccompanied children are able to call their families upon arrival, and that they are provided access to psychosocial support in a timely manner.

“Italy is saving hundreds of lives in the Mediterranean; now it needs to ensure the safety of migrants and asylum seekers once on land,” Sunderland said. “Children who have survived these harrowing journeys on their own are in special need, and should never be left to languish in overcrowded, unsafe places.”