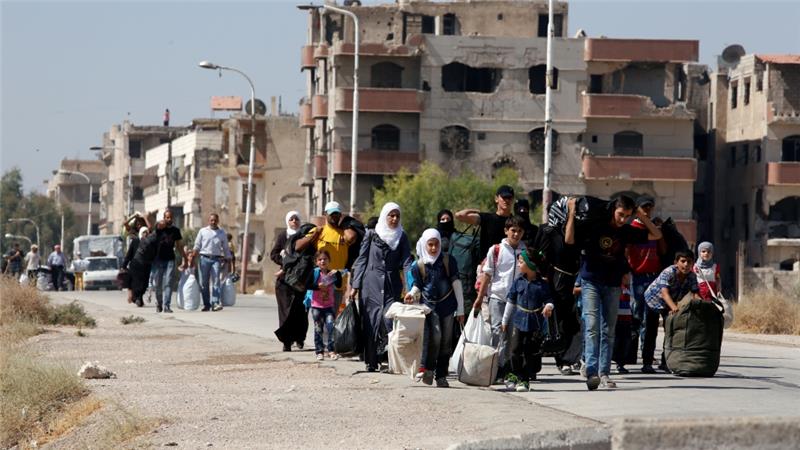 Buses carrying more than 300 Syrians left the besieged Damascus suburb of Moadamiyeh on Friday, in the first stage of a deal that will enable the government to retake control of the rebel-held area.

In the first stage of the deal, 303 people, including 62 gunmen who agreed to lay down their arms and accept a presidential amnesty deal, were bussed out of the area and taken to the nearby government-controlled town of Horjelah, according Syrian state news agency SANA.

The Moadamiyeh agreement comes just a week after a deal was struck in neighbouring Daraya that brought about the full evacuation of the suburb, a move heavily criticised by the international community as forced displacement.

Those who left Moadamiyeh on Friday were originally from Daraya, having fled heavy bombardments earlier in the year.

"The heroic acts of the Syrian army in Daraya led to the achievement in Moadamiyeh," Alaa Ibrahim, the governor of rural Damascus, told Syrian state TV.

Al Jazeera's Hashem Ahelbarra, reporting from Gaziantep on the Turkey-Syria border, said the concept of "forcing deals on local populations" has been criticized by the United Nations and the international community as something "that would give the government precedent to continue starving its own population into surrender".

The UN's Syria envoy Staffan de Mistura voiced concern that the Daraya agreement was part of a larger strategy by the government to empty rebel enclaves and that it may soon be extended to other areas.

There are "indications that after Daraya we may have other Darayas," he told reporters in Geneva on Thursday.

"There is clearly a strategy at the moment to move from Daraya" to other besieged areas "in a similar pattern".

The UN has underlined that it was not consulted on the Daraya deal, and described the evacuation of the suburb as a forced displacement.

In the second stage of the Moadamiyeh deal, rebels who refuse to hand over their weapons will be forced to leave the suburb, probably to rebel-controlled Idlib province.

It was not clear when the second stage would be implemented or when government security forces would take over control of the suburb.

The deal was reportedly reached on Tuesday in a meeting between Moadamiyeh's local council, government officials and Russian military officers at the army's 4th Armoured Division headquarters in the mountains on the southern outskirts of Damascus.

"It wasn't a negotiation or a conversation, it was a threat," Moadamiyeh-based media activist Dani Qappani told Al Jazeera. "They basicallly told us: 'Either surrender or we burn Moadamiyeh.'"

"They know the situation here. There's little to no food or medical supplies," said Qappani, adding that residents of the besieged suburb could not hold out much longer.

"Once they finish evacuating people of Daraya who are living here, they'll try to begin the process of surrendering arms and dismantling the revolutionary establishments inside the city."

Moadamiyeh was hit with toxic sarin gas in 2013, according to the UN, and has suffered a three-year government siege, leaving its 28,000 residents with little food or medical supplies.

Rebel fighters in Moadamiyeh have negotiated several local truces with the government since 2012, and the suburb has been spared much of the destruction and bombing that occured in Daraya, just a mile away.

"At the core of the matter is the clearing of the area," said Qappani.

"A large portion of people don't want to leave their homes because they don't want the regime to forcefully change the demography of the area."

Abo Kanan al-Dimashqi, a member of the Moadamiyeh local council, told Al Jazeera he believes the government "clearly wants to do what it did in Daraya".

"They want to clear the area and put a different sect here. That's their plan - a demographic change."

After last week's deal in neighbouring Daraya, government troops took control of a completely empty suburb - once home to a quarter of a million people.

"The government is now gaining some momentum on the outskirts of the capital with this new tactic, forcing the population into leaving their areas through years of siege," said Al Jazeera's Ahelbarra.

"Now after Daraya, today is Moadamiyeh. There are concerns that the government is going to further replicate the resettling of the Sunni community in different parts of the capital. There are fears that Douma, a major opposition stronghold near the capital, could be the next."