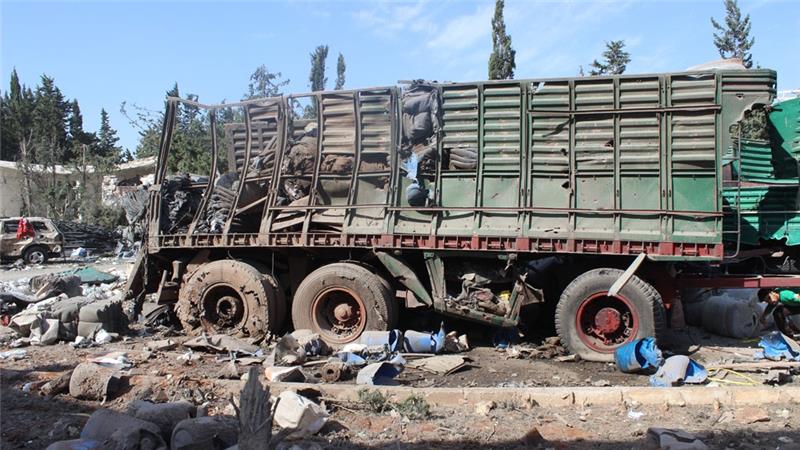 The UN says it is ready to resume the delivery of life-saving aid to Syria, days after an attack on a humanitarian convoy killed 20 people and triggered the suspension of much-needed relief operations.

"The preparation for these convoys has now resumed and we are ready to deliver aid to besieged and hard-to-reach areas as soon as possible," the UN Office for the Coordination of Humanitarian Affairs (OCHA) said in a statement on Wednesday.

"The United Nations continues to call for safe, unconditional, unimpeded and sustained access to all Syrians in need, wherever they are," it said.

Jens Laerke, the spokesman for OCHA, said that "several" convoys were expected as early as Thursday, but did not specify where. He said the convoys would not go to the besieged city of Aleppo in northern Syria.

The announcement came shortly after the US and Russia faced off over the conflict in Syria at a UN crisis meeting discussing the situation in the country following the collapse of a nationwide ceasefire.

Russia and the US negotiated the latest truce plan, but Syria ended the week-long ceasefire on Monday following a US-led coalition strikeon a Syrian army post.

Shortly after the truce ended, a UN aid convoy was hit in an air strike that US officials have blamed on Russia, the key ally of Syrian President Bashar al-Assad. Moscow has rejected the allegations that Russian or Syrian warplanes carried out the attack.

Addressing the UN Security Council on Wednesday, US Secretary of State John Kerry called for the creation of no-go areas for aircraft in northern Syria to facilitate the delivery of aid, and demanded that Russia forced the Syrian government to ground its warplanes.

Kerry said the attack on the aid convoy "raised profound doubt" as to whether Russia or Syria would live up to ceasefire obligations.

"Supposedly we all want the same goal ...  a secular united Syria ... but we are all proving to be woefully inadequate to come to the table and have that discussion."

Kerry said that listening to Russian Foreign Minister Sergey Lavrov made him feel like he was living in a "parallel universe".

Lavrov, for his part, called for a "very thorough and impartial investigation" into the convoy attack to determine what had happened.

"Many have said it could have been a rocket or an artillery shelling," he told the Security Council meeting.

"I think we need to refrain from emotional reactions and instead investigate and be very professional."

Al Jazeera's James Bays, reporting from UN headquarters in New York, said it looked like after years of negotiations with Lavrov, Kerry had finally "cracked".

"Ever since he's been secretary of state, Kerry's felt his personal cooperation with Lavrov, a man he's known for a long time, was the way forward. They'd come up with repeated deals in Munich earlier this year and even 10 days ago.

"He's placed his trust in Lavrov despite many, including those in the US administration, questioning that trust and feeling that Kerry has been humiliated repeatedly.

"Now it seems that Kerry has finally cracked," our correspondent said.

UN Secretary-General Ban Ki-moon told the meeting this was a "make or break moment" for Syria, urging world powers to use their influence to help re-start political talks so Syrians can "negotiate a way out of the hell in which they are trapped".

Russia and the US co-sponsored the fragile ceasefire plan, with Kerry warning it could be the "last chance" to try to end Syria's civil war, which has killed hundreds of thousands of people in five years.

Despite the tensions, Kerry insisted that efforts to salvage the truce were "not dead", after a short meeting of the 23-nation International Syria Support Group in New York, where world leaders have gathered for the UN General Assembly.

Kerry's spokesman John Kirby said it had been agreed that "despite continued violence", diplomats would use the agreement between the US and Russia as a basis for more talks.

The deal foresaw an end to fighting between Assad's forces and moderate rebels, aid deliveries to besieged areas and, if the ceasefire was held for seven days, cooperation between Moscow and Washington in battling Islamic State of Iraq and the Levant (ISIL, also known as ISIS) and other groups.

On the ground, meanwhile, heavy bombardment pummeled the city of Aleppo and other areas in the province on Wednesday.

At least 13 medics were killed in a series of air strikes in Khan Tuman, a village south of Aleppo city, on Wednesday, according to the Union of Syrian Medical Relief Organisations.

The group said air strikes killed four of its staff, two nurses and two ambulance drivers, as they were evacuating victims from an earlier raid, which had killed nine other medical personnel.

The Syrian Observatory for Human Rights, which tracks daily developments in the Syrian conflict, said seven civilians, including three children, were also killed in separate air raids in the northwestern town of Khan Sheikhun.