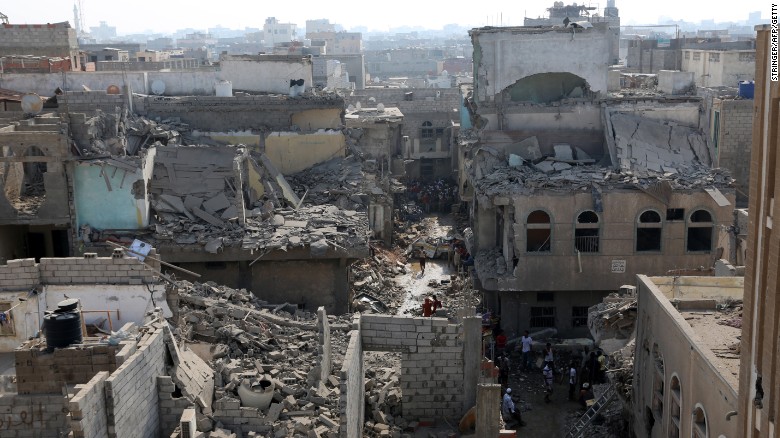 The Yemeni Defense Ministry gave a higher death toll; it said 34 were killed and at least 55 injured. Eighteen of them are in critical condition, according to the medics.
The Saudi bombardment reportedly targeted a heavily populated civilian neighborhood in the city's Alhook district, where hundreds of homes are located.
Some 14 homes were destroyed and more than 90 were damaged.


Ali Allanah's wife and child were among those injured in the attack.
"Entire families living at home in peace were killed by the airstrikes," said Allanah, whose home was damaged. "Rescue crews were not able to reach many of the victims due to the nonstop airstrikes."

"Ambulances had to return to the site numerous times because of limited resources and some patients died in the hospital because doctors were treating other patients."

When asked about reports of civilian casualties in Hodeida, Saudi-led coalition spokesman Brig. Gen. Ahmed Asseri told CNN that "as with any allegations we receive, the information will be reviewed and once it is found [to be] supporting the allegation based on credible evidence, we will then move to a next step of investigation."


Attacks on civilian targets are witnessed almost on a daily basis in Yemen. Early Thursday, at least 10 civilians, including six children, were killed when Saudi airstrikes targeted a family home in Yemen region of Saada, according to two local security officials.
Spokesman for the Houthi-run Defense Ministry, Sharaf Luqman, said that Yemen witnesses over 500 airstrikes in a single day.
Yemen hospital hit in airstrike, kills 14

"On average, at least 200 Saudi airstrikes attack Yemen daily but that increases to hundreds more when Saudi escalates its attacks on Yemen, and that's when civilian targets pay the price of Saudi aggression," said Luqman.


The month of September has been the bloodiest during the 18-month Yemen war. Last week, at least 64 civilians were killed when 18 Saudi airstrikes attacked a farm where farmers were digging a well in AlSaadon, Arhab, in the outskirts of Yemen's capital Sanaa.

High civilian casualties is only the beginning of Yemen's crisis. The country's UNICEF office said that nearly 10,000 children under age 5 died from preventable diseases there over the last year alone.

Some 1.5 million children are currently malnourished in Yemen, of which 370,000 suffer from severe acute malnutrition, according to the charity.

Yemen's economic infrastructure has also been blighted during the war. At least 430 factories and companies were destroyed by Saudi airstrikes since the start of the conflict, according to Ahmed Bahri, political chief of the Sanaa based Haq Party. In September alone, 17 factories were attacked killing 67 civilians.

The UN says that at least 10,000 people have been reported killed during Yemen war, but the true number is expected to be much higher.