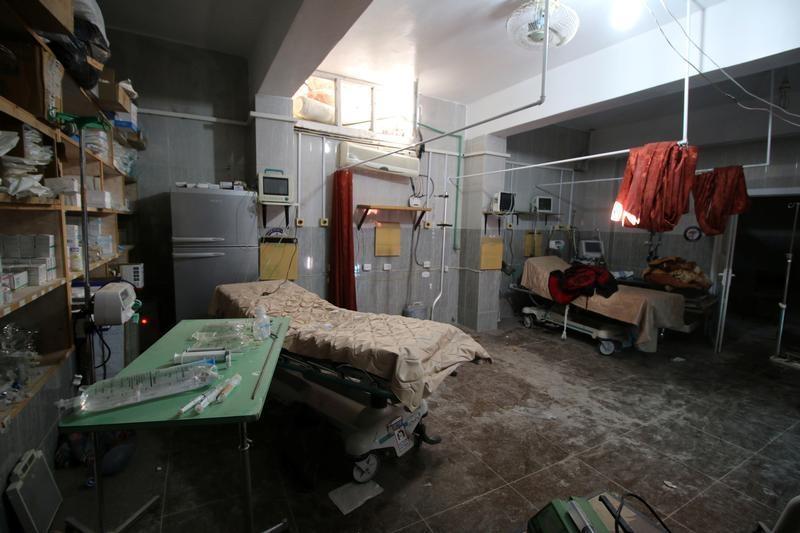 (New York) – The United Nations Security Council should demand that Syrian and Russian forces immediately halt unlawful attacks in eastern Aleppo and ensure that aid workers can safely deliver humanitarian assistance to hundreds of thousands of people trapped in the city.

Since September 19, 2016, Russian and Syrian forces have bombarded opposition-controlled parts of Aleppo. The attacks included the use of barrel bombs, cluster munitions, and incendiary weapons, and damaged or partially destroyed at least five hospitals in six separate attacks, Human Rights Watch research shows. According to the UN, the offensive has killed about 320 civilians, including over 100 children.

“Using massive firepower in residential areas where thousands of civilians are trapped is reckless and could amount to a war crime,” said Louis Charbonneau, UN director at Human Rights Watch. “The Security Council should immediately adopt a resolution demanding an end to the slaughter. And Russia, itself involved in the bombing, should refrain from using its veto or risk further sullying its record as a permanent member of the council.”

Doctors, hospital staff, activists, journalists, and photographers told Human Rights Watch by phone that aircraft have attacked opposition-controlled parts of Aleppo relentlessly for nearly two weeks. Air-dropped munitions hit a hospital known as M10 on September 28, and again on October 1. Describing the latest attack, the head of the hospital administration said, “The attack destroyed the laboratory and the generators, and damaged the intensive care unit and the patients’ wing.” The M10 hospital had to temporarily halt its operations because of the damage, he said. The attack killed at least one person and wounded at least 10, local residents said.

Describing an attack on the M2 hospital on September 28, the hospital administrator said: “A rocket struck the entrance of the emergency department, killing one person and injuring a nurse, whose body was covered in shrapnel injuries. The material damage was really bad. The walls keep crumbling. No one cares, no one listens, no one is stopping this waterfall of blood.”

A sustained attack on the Shaar district on September 30, for example, included the use of incendiary weapons, which set several buildings ablaze, including three hospitals. Staff at the three hospitals described fires that were difficult to extinguish. Journalists who arrived at the scene a few minutes after the attack filmed burning remnants from an incendiary weapon, which they shared with Human Rights Watch.

Most countries have banned the use of cluster munitions because of their inherently indiscriminate effects and the danger that unexploded submunitions pose to civilians after an attack. Neither Syria nor Russia are parties to the treaty banning cluster munitions.

Since 2011, Russia, together with China, has vetoed four Security Council resolutions to protect the Syrian government from condemnation and the threat of sanctions – and to prevent the Security Council from referring the situation in Syria to the International Criminal Court (ICC).

As of September 2016, 112 countries, including a majority of UN Security Council members, had endorsed the Accountability Coherence and Transparency (ACT) Code of Conduct, pledging not to vote against a credible draft resolution aimed at preventing or ending serious crimes under international law, as well as supporting timely Security Council action to address such grave abuses. Further highlighting global momentum in favor of restraint in using a Security Council veto, 99 countries support a French and Mexican initiative calling for permanent Security Council members to voluntarily pledge not to use the veto in situations of mass atrocities.

In certain cases, there are grounds for asking UN member states to recuse themselves from a Security Council vote. Article 27 of the UN Charter stipulates that “a party to a dispute shall abstain from voting.”

Council members should support any resolution that would condemn in the strongest terms the unlawful attacks in Aleppo and demand an immediate halt to such attacks by all parties and allow UN and other aid agencies immediate, safe, and sustained access to civilians in need, Human Rights Watch said. Such a resolution should remind all parties of the duty to permit civilians to safely leave an urban area under siege, deriving from the absolute ban on starvation under the laws of war, as a method of warfare. A resolution should also underline the importance of accountability for serious crimes committed by all parties involved in the conflict in Syria.

Human Rights Watch has long called for a UN arms embargo, individual sanctions on those responsible for the use of chemical weapons and other atrocities by all sides in Syria, and referral of the situation to the International Criminal Court.

Deliberate or reckless attacks against civilians and civilian objects committed with criminal intent are war crimes. The laws of war require the parties to a conflict to take constant care during military operations to spare the civilian population and to “take all feasible precautions” to avoid or minimize the incidental loss of civilian life and damage to civilian objects. UN Secretary-General Ban Ki-moon told the Security Council on September 28 that those using indiscriminate weapons in Aleppo “know they are committing war crimes.”

Security Council Resolution 2254, adopted on December 18, 2015, called on all parties to the conflict in Syria to “immediately cease any attacks against civilians and civilian objects as such, including attacks against medical facilities and personnel, and any indiscriminate use of weapons, including through shelling and aerial bombardment.”

“The Security Council should not remain silent one more day about the unlawful assault on Aleppo,” Charbonneau said. “Council members should put their condemnation on the record, in a resolution, to remind Russia and Syria that the world is watching and that other council members will not be bystanders while Aleppo descends into hell.”