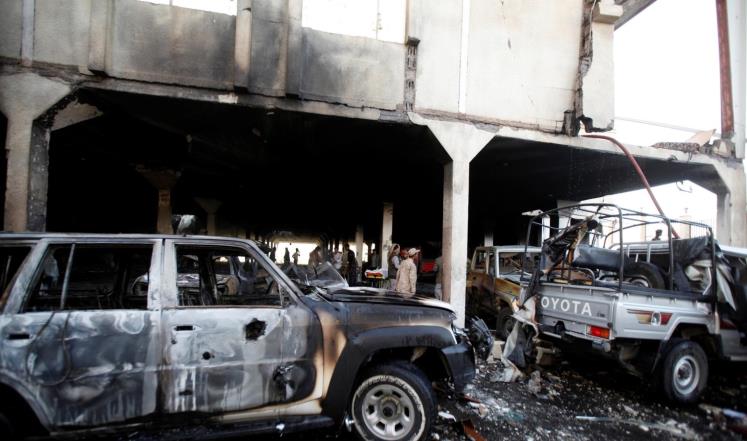 Geneva- The savage attack on funeral-goers in Sana’a, Yemen’s capital, should be condemned in the strongest terms by the international community and support withdrawn from the Saudi Arabia-led coalition believed to be at fault, says the Euro-Med Human Rights Monitor.

Hundreds of people came to the city’s Grand Hall of Ceremonies to grieve the death of Jalal Roeichan, the father of the minister of interior for the governing Houthi coalition. The hall was targeted with four missiles. In addition, Euro-Med Monitor has reviewed videos published by activists showing an additional air raid targeting paramedics who were administering first-aid to victims. It is estimated that at least 82 people were killed and more than 400 injured.

Eyewitnesses reported that the airstrikes were conducted by warplanes of the Saudi-led coalition, although inside sources denied any involvement. Saudi Arabia is backed by Bahrain, Qatar, the UAE, Egypt, Jordan, Morocco, Sudan and the United States. The attack on the Houthis and their allies was launched in March 2015.

The targeting of unarmed civilians is a war crime under international humanitarian law and conventions. Indiscriminate attacks and excessive use of force against civilians also are crimes against humanity under the Fourth Geneva Convention, particularly in areas with high population density.

“International human rights laws and conventions were recklessly violated in this attack on funeral-goers,” says Ihsan Adel, Euro-Med Monitor legal adviser. “The Fourth Geneva Convention prohibits a group of people or village from being held responsible for acts committed by specific individuals. To do so constitutes collective punishment.”

Euro-Med Monitor Human Rights Monitor calls on the international community to cease backing sides in the conflict so that it can be de-escalated, with incentives created for a negotiated peace.