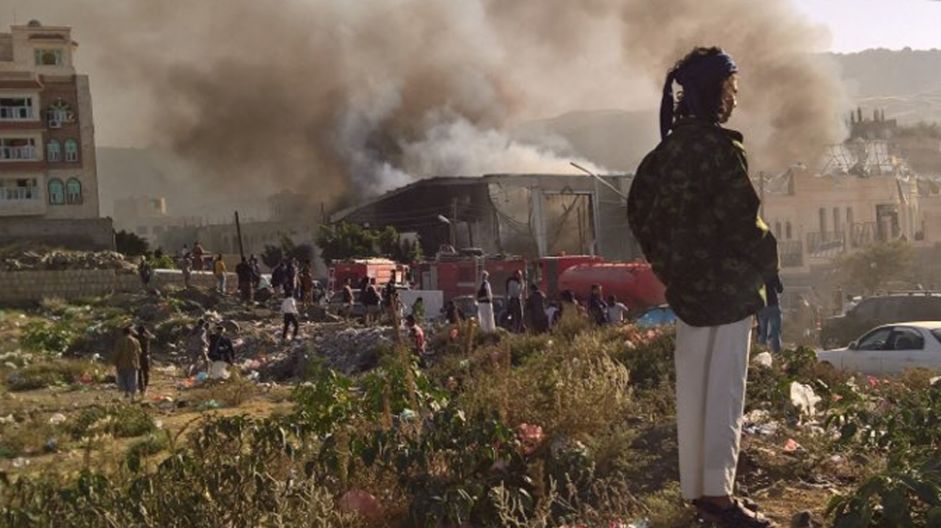 At least 140 people were killed and more than 500 wounded in several air strikes on a funeral reception in the Yemeni capital, Sanaa, according to health officials.

Saba news agency, which is aligned with the Iran-allied Houthi group, accused an Arab coalition fighter jet of striking the grand hall of ceremonies on al-Khamseen Street on Saturday afternoon.

Hundreds of mourners had gathered in the hall to take part in a funeral ceremony.

The United Nations released a statement saying the UN humanitarian coordinator and the NGO community in Yemen were outraged and shocked by the air strikes.

"Initial reports from health officials in Sanaa indicate over 140 people were killed and over 525 injured," OCHA said in the statement.

The death toll was one of the largest in any single incident since the Arab alliance began military operations to try to restore President Abd-Rabbu Mansour Hadi to power following his ousting by the Houthis in March 2015.

However, sources in the alliance denied that there was an Arab coalition role in the strikes.

"Absolutely no such operation took place at that target," one of the sources told Reuters news agency, citing what he described as confirmation from the coalition air force command.

"The coalition is aware of such reports and is certain that it is possible that other causes of bombing are to be considered. The coalition has in the past avoided such gatherings and (they) never been a subject of targets."

Hakim al-Masmari, the editor of the Yemen Post, told Al Jazeera the venue in Sanaa was hit by four strikes.

"Initially two, then after the plane circled around, a further two. The planes were heard and seen in the skies by multiple people.

The Arab coalition, assembled by Saudi Arabia, has been providing air support for Hadi's forces in a civil war that has killed more than 10,000 people since March 2015 and displaced more than three million.

Fighting has intensified since August when UN-sponsored peace talks in Kuwait ended without an agreement.

Saba cited a security source as saying that the strikes occurred as the funeral reception was under way for the father of Brigadier Jalal al-Ruweishan, interior minister in the self-proclaimed Houthi government.

The source said Ruweishan was present at the event. It is not clear whether he survived the attack.

The strikes caused a large fire at the grand hall, which was largely destroyed, said the Sabaa report.

Haykal Bafana, a Yemeni analyst based in Sanaa, told Al Jazeera that four missiles were used in the attack.

"I watched the air strikes, which took place barely 1.5km from my house. They first used a normal missile, that pierced the roof. The second was an incendiary missile, burning the whole inside of the hall.

"The third was a missile on first responders," Bafana said.

He also said that military officials in attendance were the possible targets.

"Ali Abdullah Saleh hardly ever attends funerals. I think Jalal al-Ruwaishan was the target. It was his father Sheikh Ali's funeral."

Ruweishan had sided with the Houthi movement when President Hadi fled Yemen after the Houthis advanced on his headquarters in the southern port city of Aden in March 2015.

The Saudi-led coalition had been blamed for several attacks on medical centres, including some run by international aid group Medecins Sans Frontieres (MSF), schools, factories and homes in the past 18 months that has killed scores of civilians.

In August, MSF said it was evacuating its staff from six hospitals in northern Yemen after a coalition air strike hit a health facility operated by the group killing 19 people.

The coalition, which says it does not target civilians, has expressed deep regret over the decision and said it was trying to set up "urgent meetings" with the medical aid group.

The conflict between Yemen's government and the Houthi rebels escalated in 2015 with the intervention of an Arab coalition in support of Hadi.

The UN says more than three million people have been displaced by fighting in Yemen since March 2015.

According to UNICEF, nearly three million people in Yemen are in need of immediate food supplies, while 1.5 million children suffer malnutrition, including 370,000 enduring very severe malnutrition that weakens their immune system.

Yemen has also been hit by a cholera outbreak , the UN has warned, saying it poses a further threat to children in the impoverished country.