No easy answers for Syrian students in Lebanon 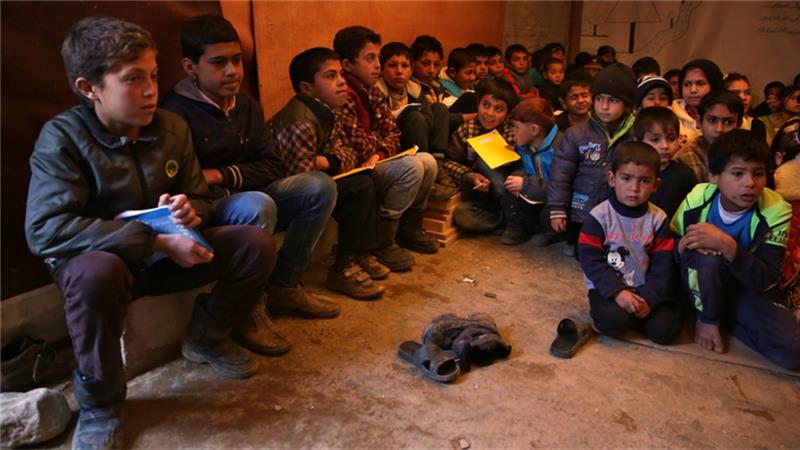 Beirut, Lebanon - The school year is starting up again in Lebanon, but none of Abu and Um Ibrahim's four school-age children can attend - just like last year, and the year before that.

The Syrian family, originally from the northern Aleppo countryside, crossed into Lebanon illegally three years ago.

"We've been trying for the last three years, standing in line and pushing to get a turn, but they always say there's no space [in school]," Um Ibrahim told Al Jazeera.

For Syrians, getting an education in Lebanon is not always easy.

At last month's United Nations summit on refugees, world leaders pledged to get one million out-of-school refugee children worldwide back into classrooms, although the timeline for the pledge was unclear. Human rights organisations say this does not go far enough, as  more than half of the six million school-age children under UNHCR's mandate have no school to go to.

In Lebanon, some 250,000 primary and secondary-level Syrian children are not in school, according to Human Rights Watch (HRW) - more than half of the total population of refugee children currently living in the country. Many have never been to school.

Lebanon's education ministry has pledged to get 50,000 more Syrian children into school this year by expanding the capacity of public schools. They will offer classes in double-shifts - with shifts in both the morning and afternoon - thus providing more school spaces in towns and villages close to high concentrations of Syrian refugees, Sonia Khoury, an education ministry official, told Al Jazeera.

In the last academic year, 238 public schools were opened with a second shift, compared with 144 in the previous year and 89 the year before that.

"So we are increasing every year by around 90 schools," Khoury said. "[The ministry] selected 330 schools for the 2016-2017 academic year, which will open based on the demand."

Last year, a total of 1,250 public schools accommodated some 65,000 Syrian pupils, she said. But keeping pupils in school is the real challenge.

"The issue is not opening the school and enrolling [the pupils] at the beginning; the issue is keeping them there," Khoury said. "So if I open a school, do I have the staff to run it? What if the transportation stops? The students won't come back."

Other experts say that structural problems stand in the way. According to Bassam Khawaja, an HRW Lebanon researcher,  Lebanon's post-2014 residency rules for Syrians is a "priority … in terms of what needs to change first".

"When parents don't have residency, most of the time they can't move around freely, which means they can't look for even informal work, which [then] seriously hinders their ability to pay for even the smallest kind of school-related costs," Khawaja said, referring to everything from transportation to school uniforms.

"It also means that more and more, parents are pulling their kids out of school and pushing them into child labour situations because they depend on their children to make a basic income to keep the family going."

According to HRW's estimates, some 70 percent of Syrian refugees in Lebanon do not have legal residency in Lebanon. Khawaja argues that government pledges to enrol more Syrian children will be "very difficult to meet if that residency policy stays in place this year".

Khoury noted that for children older than 15, schools have been instructed to enrol them even if their families lack residency.

Alternatives to formal schooling have also arisen in the face of the refugee crisis. Last year, Syrian community activist Maysoun set up a free secondary-level school for Syrian children in Lebanon's Bekaa Valley. In a half-renovated attic down a side street, the children here study an Arabic-language curriculum defined and supported by the Syrian opposition.

Maysoun told Al Jazeera that the school aims to circumvent the problems that Syrians face in Lebanese schools, including language barriers, costs and residency status.

"Because these children are 13 to 18 years old, there are issues with methodology. The Lebanese curriculum materials are in English and not Arabic," Maysoun said. "Also, because the students don't have residency papers, they can't attend schools. Many of the students entered Lebanon illegally."

The Lebanese government withdrew support for such non-formal schools last year, and in some cases has actively called on the schools to close.

But as they continue to operate in secret, such facilities are providing some youths with a stopgap. Mohamed, a 17-year-old Syrian refugee from Homs, was out of school for two years before he started coming here, and he continues to balance his studies with his job in a local supermarket.

"I'm trying to support my family as much as I can, so I'm balancing study and work to try and help [them]," he told Al Jazeera. "My mother doesn't work and I take care of my sisters with my father. My father doesn't work on a regular basis because there aren't so many opportunities here."

In a country that is hosting more than one million Syrian refugees, there are rarely easy answers. Often, Syrian parents of out-of-school children simply feel stuck.

Abu Ibrahim said that with Syria still at war, Lebanon sometimes feels like a prison.

"The kids can't go to school, so they won't study. We live in this room with nine people, so there's not even a proper place for them to study," he said. "There's a war in Syria, sure. But this is like another kind of war."