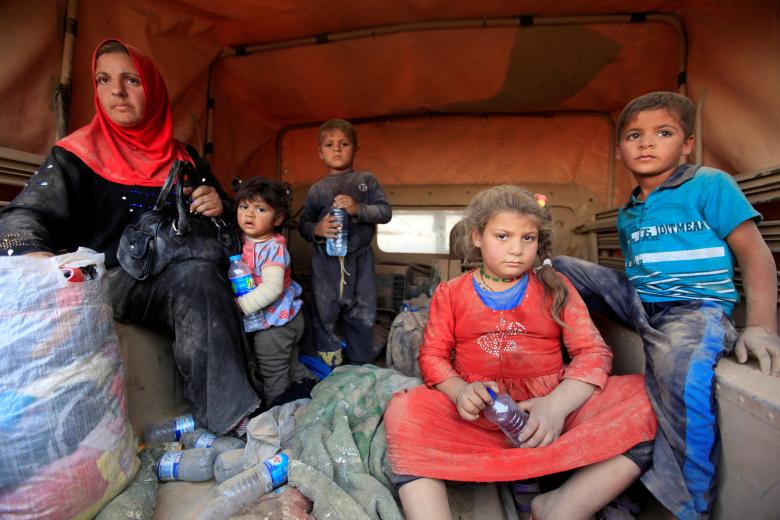 Thousands of Iraqis fleeing fighting in the offensive against Islamic State (IS) in Mosul have taken shelter in northeastern Syria in recent days, an official from the Kurdish-led administration in the area said on Wednesday.

The displaced, who were Arab and mostly women, children and the elderly, had been crossing the border since Oct. 16 and were currently being housed in a refugee camp in the al-Houl area in Hasaka province, the official said.

"There are around 5,000 to 6,000 who are already there. Meanwhile there are still around 3,000 who are waiting at the border to cross," Mezkin Ahmed, an adviser to the de-facto autonomous administration that controls much of northeast Syria, said.

"We have set up a welcome point at the border. It is a humanitarian operation - we have experienced Daesh first-hand, in Kobani for example, so this is our duty," she added, referring to a northern Syrian town previously occupied by Islamic State, and using a pejorative term for IS.

Three days into the assault began on Mosul, U.S.-backed Iraqi government and Kurdish forces are steadily recovering outlying territory before the big thrust into the city itself, expected to be the biggest battle in Iraq since the 2003 U.S.-led invasion.

The U.N. High Commissioner for Refugees said on Monday that as many as 100,000 Iraqis might flee to Syria and Turkey to escape the fighting in Mosul, a city of 1.5 million and the largest controlled by IS militants.

It said that there were plans under way to receive up to 90,000 Iraqi refugees in Syria, whose Hasaka province across the border from Mosul is mostly controlled by Kurds.

As Syria's civil war weakened central state institutions after 2011, Kurdish groups in the north of the country established autonomous rule, setting up three self-governing cantons in a region they call Rojava.

The main Kurdish armed group there, the YPG, is the most powerful element in the Syrian Democratic Forces, a coalition of militias backed by the United States and fighting against Islamic State inside Syria.