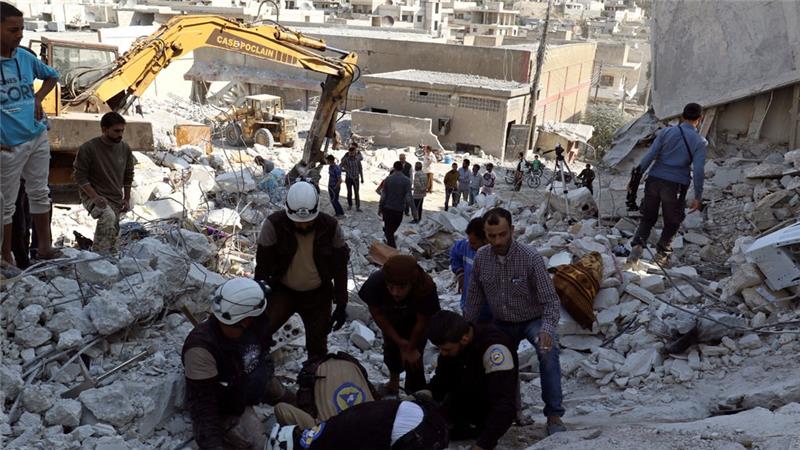 In Khan Sheikhun, a town in the province's south, air strikes on Monday killed seven people, including two women and a child, the Syrian Observatory for Human Rights said.

The Britain-based Observatory said the raids were carried out by either Syrian or Russian aircraft.

Another seven people, including four women and two children, were killed in raids on Kafr Takharim, further north in the province.

Those raids hit three residential buildings, a local government building, and a stadium, shortly after midnight, AFP's correspondent in the town said.

In the morning, rescue workers were still trying to pull bodies out of the rubble.

"My sister's house was standing right here. She and her daughter are dead, along with another family," Abu Mohammad told AFP.

"There was no military base here. All the military positions are outside the town," the devastated man said.

Another man and a woman were killed in rocket fire in the nearby town of Kafr Awid.

Idlib province is controlled by the Army of Conquest, an alliance of rebel groups and other armed groups including the Fateh al-Sham Front, which changed its name from Al-Nusra Front after breaking off ties with al-Qaeda.

According to the Observatory, heavy bombardment has battered the northwest province in recent days.

Since Thursday, bombardment has killed 44 civilians, including 11 women, nine children, and one rescue worker.

Meanwhile in the other frontline in Aleppo, both the Observatory and the Aleppo Media Center, an activist collective, reported government shelling in eastern parts of the city.

A video released by the Syrian army also showed tanks and cannons pounding rebel positions in the area.

Syrian troops have besieged rebel-held parts of Aleppo for weeks, subjecting the districts to some of the worst air raids since a cease-fire brokered by the United States and Russia collapsed on September 19.

Opposition activists said more than 600 people have been killed in Aleppo and neighboring villages since then.

Between 250,000 and 300,000 civilians are thought to be trapped in eastern Aleppo, with dwindling food supplies and extremely limited medical care in underground hospitals that have been hit repeatedly by air strikes.

Syria's conflict broke out in March 2011 with anti-government protests, but it has since evolved into all-out war pitting rebels, government forces, Kurds and other armed groups against each other.

Since the beginning of the conflict there have been more than 260,000 people, mostly civilians, who have been reported killed.