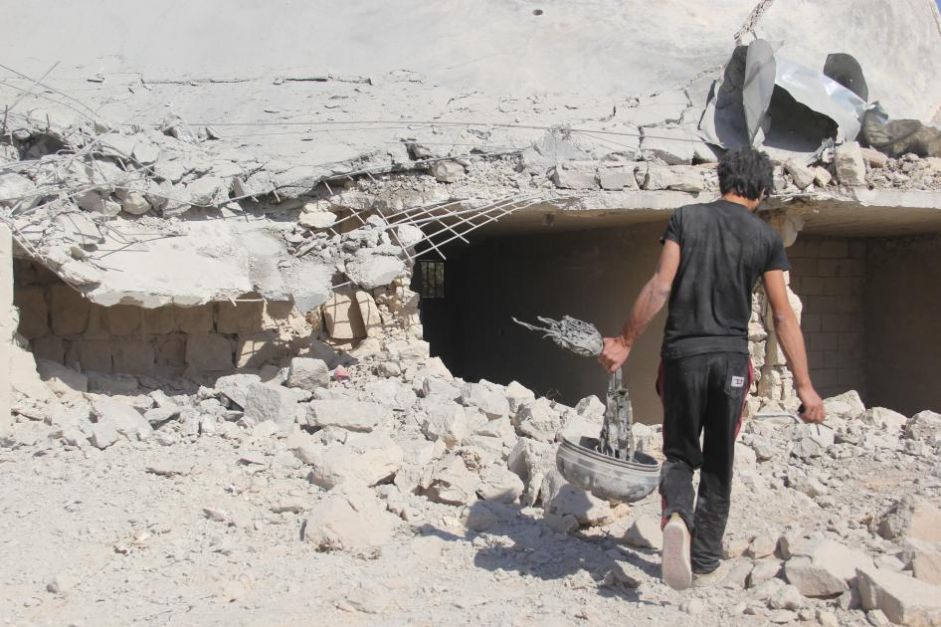 Witnesses told Human Rights Watch that the attacks struck a school complex in a residential area in the middle of the town of al-Haas while children were in class. The complex included a kindergarten, an elementary school, two middle schools, and a secondary school. The attacks also hit other nearby civilian infrastructure.

“On a clear morning, warplanes attacked a large school compound while class was in session, and kept on bombing while children and teachers tried to flee,” said Bill Van Esveld, senior children’s rights researcher at Human Rights Watch. “The fresh horror of this attack on schoolchildren is a testament to the inadequacy of the international response to ongoing war crimes in Syria.”

A report on Syrian state television on October 26 quoted a military source as saying attacks targeting opposition positions in al-Haas had killed fighters, news wires reported. Witnesses told Human Rights Watch that there were no military objectives in or near the schools at the time and that all of the killed and injured were civilians.

Human Rights Watch interviewed by phone seven witnesses to the attack, analyzed several videos posted by opposition groups and news sites, and interviewed one of the videographers. “There were so many torn bodies on the ground,” he said. “And schoolbooks mixed with blood.”

Witnesses said that one jet aircraft began the attack after 10 a.m. and that a second aircraft continued the attacks, which lasted for about 20 to 30 minutes. Witnesses consistently described seeing bombs with parachutes, and counted between seven and nine explosions in al-Haas, concentrated on the school complex and roads leading to it.

Screen-grabs and videos that witnesses said were of the attack show an SU-24 aircraft flying at medium altitude dropping munitions that deployed parachutes during descent before detonating near the ground. Both the Russian and Syrian militaries conduct airstrikes using SU-24 series aircraft. Human Rights Watch is unable to independently authenticate the images but they are consistent with witness descriptions of the attack.

A videographer whose footage was posted to YouTube by a local media group told Human Rights Watch in a series of WhatsApp messages that he was 300 meters from the schools that were hit when he shot the video and that anti-aircraft fire heard on the videos was from opposition fighters outside al-Haas in Kafr Nabl, a town three kilometers away. He said that he went to the strike site after he shot the video and that there were no military objectives in or near the schools – and that to his knowledge there are no military objectives in al-Haas.

The attacks killed 14 children including 9 girls, 12 men, and 7 women, all civilians, according to the Violations Documentation Center, a Syrian monitoring group. The United Nations Children’s Fund (UNICEF)reported that the attack had killed 22 children. One resident told Human Rights Watch that the casualties included 22 children and 7 parents who came to pick up their children after the first of several bombs exploded, and that the death toll could rise among the more than 40 wounded, who have been sent to hospitals in Syria or evacuated to Antakya, Turkey.

At around 10 a.m. on October 27, opposition fighters in besieged East Aleppo reportedly launched a rocket attack that hit a private school, The National School, in the Shahba’ neighborhood in government-controlled West Aleppo, killing at least three childrenaccording to one report and as many as six according to another, including three siblings from one family. The attack also wounded 14, according to Syrian news sources.

About 1.7 million Syrian children are out of school in the country due to the conflict, and one in three schools is closed due to destruction, use for military purposes, or to shelter displaced people. About 750,000 Syrian refugee children in the region are not in school.

On its Facebook page, the Russian Defense Ministry posted an aerial photograph of the school compound in al-Haas from a Russian drone, claiming that there was no damage to the roofs of the buildings and no crater from aerial bombs nearby. The Defense Ministry spokesman reiterated these claims and added that a “blast wave” would have “swept away” all school furniture, and that videos of the incident had been edited. However, the damage to the schoolyard visible in the aerial photograph is consistent with the above-the-ground detonation of a blast or enhanced blast munition, Human Rights Watch said.

Idlib province is largely controlled by the Army of Conquest, an alliance of armed opposition groups including the Fateh al-Sham Front, which changed its name from Jabhat al-Nusra after breaking off ties with Al-Qaeda earlier this year.

The repeated striking of a large school complex in a residential area indicate the attacks were unlawful, being either indiscriminate or deliberately targeting civilians, and possible war crimes, Human Rights Watch said. Serious violations of international humanitarian law (the laws of war), when committed with criminal intent, amount to war crimes. Criminal intent requires purposeful or reckless action.

Human Rights Watch has documented previous Syrian government airstrikes that killed schoolchildren and teachers, and destroyed school buildings. Human Rights Watch has also previously documented indiscriminate mortar, locally made rocket, and other artillery attacks by armed opposition groups in Damascus and Homs governorates that struck at or near school buses, schools, and universities that were in operation at the time, and car bombings that have targeted schools in government-held territory. The attacks killed civilians, including children.

Human Rights Watch has long called for a UN arms embargo, individual sanctions on those responsible for atrocities by all sides in Syria, and referral of the situation to the International Criminal Court (ICC).

Speaking to UN correspondents on October 27, UN Special Envoy for Global Education Gordon Brown urged the Security Council, in relation for the attack in al-Haas, to “ask the International Criminal Court [prosecutor] for an investigation into what is happening in Syrian schools and in Syria as a whole.” UN Secretary-General Ban Ki-moon also called for an investigation into the attack.

On October 27, Russian Foreign Affairs spokesperson Maria Zakharova called for an investigation and “demand[ed] all international organizations join the investigation without further delay.” The following day, she wrote on her Facebook page that photographs of the aftermath of the attack were “computer graphics.”

In 2014, Russia and China vetoed a Security Council resolution that would have given the ICC prosecutor a mandate to investigate serious crimes in Syria despite ongoing grave violations in the country. Russia vetoed a fifth resolution at the Security Council on the conflict in Syria on October 8, 2016, stonewalling efforts to stop Syrian-Russian airstrikes on civilians in East Aleppo.

In light of the UN Security Council’s failure to maintain international peace and security and protect civilians in Syria, UN member states should request an emergency special session of the General Assembly on Syria, Human Rights Watch said. During this session, the General Assembly should take steps to establish an investigative mechanism on serious crimes in Syria, with a view to preparing cases for future criminal prosecution.

“UN member states should work together for what the Security Council has failed to provide – an end to unlawful attacks on civilians,” said Van Esveld. “Otherwise Syrian schoolchildren and others will continue to suffer, and the consequences are unbearable to contemplate.”