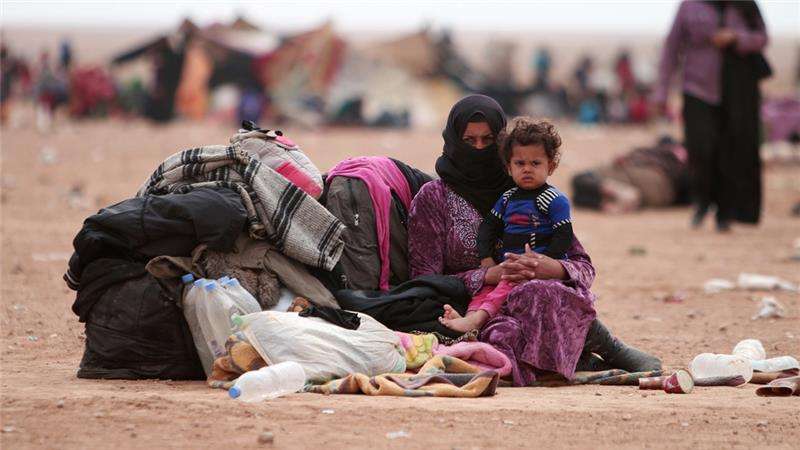 More than 14,000 Iraqis fleeing the offensive against ISIL in Mosul have crossed the border into Syria since the start of the operation a month ago, sources from a UN affiliated agency told Al Jazeera.

According to the sources, as many as 8,000 of the Iraqis crossed into Syria's Hasakah province, and some are now in the al-Hol refugee camp.

Close to 5,000 have also reached Raqqa, ISIL's stronghold in Syria, while hundreds of others are spread out in Deir Az Zor, Aleppo and Idlib, but are not staying in refugee camps.

Medical sources also confirmed to Al Jazeera that they have treated or met Iraqi civilians in Syria's Idlib province who were coming from Mosul.

Al Jazeera has also learned that at least one family tried to cross the border from Bab Al Hawwa into Turkey, but were not allowed in.

Sources also said that the Iraqi men were afraid of going into the Iraqi Kurdish territory, for fear of being taken into custody and accused of links to ISIL, also known as Islamic State of Iraq and the Levant, or ISIS.

Most of the Iraqi families and individuals have come from Mosul and surrounding areas, while a small number have fled from Anbar.

Stranded at the border

Earlier reports had said that the UN was unable to deliver aid parcels to the al-Hol camp camp in Hasakah, because of security concerns.

But Matthew Saltmarsh, spokesman at UN's refugee agency, told Al Jazeera that UN workers have now been able to deliver "daily" aid, including food and water, to the camp.

Saltmarsh also confirmed that in the last five days, almost 2,000 people - mostly Iraqis - have been moved to al-Hol camp. A smaller number of refugees at the camp are Syrians.

He clarified that the majority of the Iraqi refugees at the al-Hol camp "predates" the anti-ISIL operation in Mosul.

Currently, the al-Hol camp can accommodate up to 15,000 people, but it is being expanded to hold as many as 50,000, Saltmarsh said.

"It is correct that the conditions at the border are difficult, and for us to get access to the refugees and IDPs [internally displaced people] took some time, because of the security situation and inhospitable terrain," he said.

He said hundreds of Iraqi refugees remain "stranded" in the border with Syria, and that the UN is trying to move them to al-Hol.

Leading up to the Mosul operation, the UN had warned that up to one million people are likely to try and escape to other parts of Iraq and Syria.

Overall, some 2.6 million Iraqis have fled the country since the beginning of the crisis in January 2014 when ISIL overran large swaths of the country, according to UN figures.

Additionally, more than one million Iraqis fled the country between 2006 and 2008 owing to growing violence following the US-led invasion and occupation in 2003.