Libya is ‘ground zero’ for Europe-bound refugees, but fails to provide basic protections 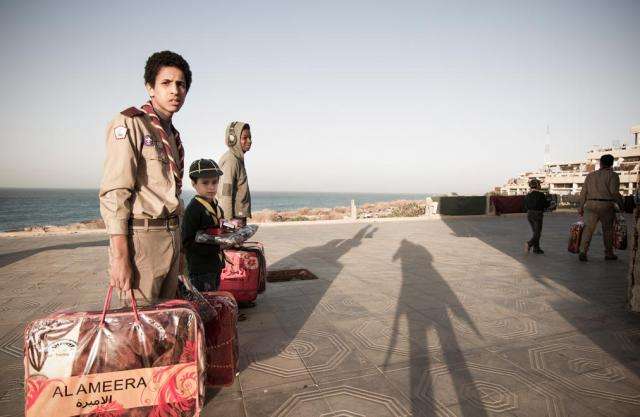 Geneva - The ongoing cycle of violence in Libya since the ouster of Libyan leader Muammar Gaddafi and his regime has forced hundreds of thousands of people to flee their homes to safer cities. Conditions took a turn for the worse recently due to the deep political divisions and inability of authorities to fulfill their responsibilities, especially those related to security and such basic services as health care and electricity. With prices for everything from commodities to rents increasing dramatically, access to necessities such as food and housing is limited as well.

Camps and unofficial “gatherings,” to which the displaced have fled, are in particularly bad straits.  Many people have been forced to find refuge in tents in areas without drinkable water or working waste management systems. The spread of disease is a significant risk.

Recently, the  number of internally displaced people (IDPs) surged due to battles raging between a variety of parties, including armed groups affiliated with the official government. In the city of Sirte, for instance, a battle is being waged between ISIS and the forces of the internationally recognized government. In Benghazi, forces affiliated with the government recognized by the parliament of eastern Libya are warring with fighters aligned with former Libyan Colonel Khalifa Haftar.

As of mid-August, the number of IDPs had reached 450,000, distributed throughout 40 towns and cities. Most lack shelter and health care. More than 100,000 displaced people are living in makeshift camps, schools and warehouses.

Most of the displaced come from the city of Benghazi, representing 47 percent of total IDPs. There also is a large number from the city of Tagora, where many of the residents who became IDPs were charged with supporting the former Gaddafi regime. Most IDPS fled to cities in the north and west of Libya, such as Tripoli and Band Walid.As a result, more than 300,000 children are not attending school.

Due in part to the absence of any solution on the horizon, the official government is neglecting the needs of the IDPs, and thousands are in need of aid. The only assistance provided is some food and medical aid offered by NGOs. International organizations have not fulfilled their obligation to provide for the basic needs of displaced families.

Psychological effects and their social dimensions, especially among women and children (who constitute the largest number of displaced people), are severe. IDPs report experiencing intimidation, confiscation of their private property and exploitation due to their vulnerable status.

Humanitarian needs created by the conflict in Libya are increasing due to continuation of the conflict and neglect by Libyan authorities and UN agencies. The state of complete impunity and resulting human rights violations have made it extremely difficult to adequately assist the displaced or even to prevent deterioration of their living conditions. The security void in the country is so extreme it has led to human trafficking.

The United Nations estimates that 62 percent of all immigrants in 2015 were refugees due to war, fleeing from countries such as Syria, Eritrea, Nigeria, South Sudan and Afghanistan. In contrast, most immigrants from African countries fled due to extreme poverty and lack of job opportunities.

As of November 2016, an estimated 343,000 immigrants had succeeded in reaching Europe via Libya—making the latter the biggest “exporter” of migrants. Another 4,600 drowned in the Mediterranean Sea. According to the Italian Interior Ministry, more than 170,000 of the refugees and migrants landed on that country’s shores.

Thousands of migrants move weekly across the borders into Libya, hoping to use it as a stepping stone to Europe. Human trafficking has increased along with it—becoming a prosperous trade that generates millions of dollars annually for gangs. This flow is enabled by the security chaos in Libya and the authorities' lack of control over areas outside the cities, including ports and coastal regions bordering the Mediterranean Sea.

However, travelers are not always successful in their attempts to use Libya as a transit point. As of mid-September 2016, about 235,000 migrants and refugees (11 percent of them women or children) had been apprehended in Libya and held in detention centers that are at 200 percent of their capacity—creating unhealthy living conditions.

In Libya alone there are currently 24 detention centers for migrants and refugees, some of which are run by the United Nations and others by bodies that fight illegal immigration. In addition, there are many unofficial detention centers run by armed groups.

Most of the detainees in the centers are from several African countries in which the poverty and harsh living conditions were their primary reason for migration. They lack access to medical care, suffer from poor ventilation and lack adequate food aid. Extreme temperatures and the spread of insects creates a fertile environment for disease.

It also is worth noting that Libyan law criminalizes illegal entry into the country. It also allows detention of foreign citizens without a deadline for deportation. Due to the absence of any law or national system governing asylum, detainees are not permitted to contact their families or lawyers, file a lawsuit, complain about their detention or receive any kind of protection. In addition, detainees are deported outside of Libya without any assessment of individuals’ applications.

Migrants and refugees who are caught by the Libyan coast guard typically are abused— beaten, humiliated, etc.—before they are taken to detention centers. During their detention, torture has been reported, especially when the centers are administered by armed groups.

Sexual assault against both men and women has been reported, and a number of deaths have resulted from this and other forms of mistreatment.

The 1951 UN agreement on refugees and its 1967 protocols protect the basic rights of refugees. Among the stipulations is a ban on the return of refugees to areas in which their lives and freedom are threatened.

The European Union—the destination of choice for migrants and refugees—must exert further effort to ensure a respect of their basic human rights. To date, most of the European Commission’s proposals related to refugees have been focused on limiting access, strengthening border controls and quick deportation of those whose asylum applications are denied. Positive steps have included pledges to increase aid for countries hosting a large number of refugees, as well as humanitarian aid organizations.

However, agreements with front-line “reception” countries, such as Turkey, to stem the flow of refugees in return for increased aid may lead to human rights violations and thus deprive individuals of internationally mandated protection and the right to a fair asylum hearing. To date, Libya has rejected European calls for greater resettlement of refugees and migrants, especially those by Hungarian Prime Minister Viktor Orbán. Instead, Libyan officials accuse the union of not fulfilling its own responsibilities for the crisis.

The EU must commit itself to taking tangible actions to prevent more deaths of migrants at sea. The focus should be on rescuing lives rather than increasing border control to prevent refugees and migrants from entering Europe.

International law states clearly in one of its most important provisions that refugees must not be returned to conditions that may threaten their lives and freedom. Therefore, the best solution for asylum seekers is for countries around the world to share the burden and say “welcome.”

The Euro-Mediterranean Human Rights Monitor calls on Libyan authorities, through its Department of Anti-Illegal Immigration and the armed groups responsible for detention centers, to humanize the conditions of detention, including providing immediate health care, improving ventilation and reducing overcrowding.

In addition, Libyan authorities should enact a law protecting asylum seekers and assuring that if they are detained, they will be treated as migrants, not criminals. Detention should be allowed only for the shortest possible period of time.

Furthermore, asylum-seekers who are refused should be deported back to their countries of origin without endangering their lives or subjecting them to undue hardships. Libyan authorities should release all asylum-seekers who are women, children or suffering from chronic diseases, as well as create a judicial supervision committee for detention centers charged with investigating transgressions and holding violators to account.

Finally, Libyan authorities must accept responsibility for taking effective steps to prevent smuggling and human-trafficking operations along the land and sea borders. It should be noted, however, that political and security stability are required to thwart these operations effectively and efficiently without resorting to human rights violations.