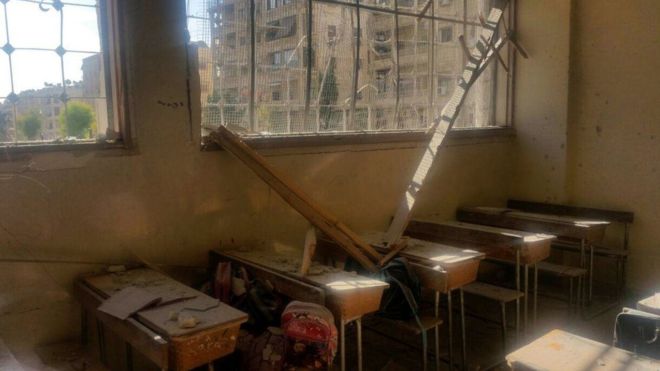 At least 32 others were injured at the school in the Furqan neighbourhood, according to the Sana news agency.

The attack comes after days of heavy bombing on the rebel-controlled east.

On Sunday, UN envoy Staffan De Mistura suggested the government grant autonomy to rebel-held areas of the city, a proposal that was dismissed.

Mr De Mistura warned earlier this week that the government was chasing a "pyrrhic victory" in Aleppo if it does not arrive at a political settlement with the opposition.

He is understood to have travelled to the capital Damascus to make another push for a peace deal, proposing an autonomous administration, according to Syria's foreign minister Walid Muallem.

But Mr Muallem said he was not willing to consider his suggestions.

"This was completely rejected... This is a violation of our sovereignty," Mr Muallem said in a televised news conference after holding talks with Mr De Mistura.

Mr De Mistura arrived in the country amid growing concern for the 275,000 residents in east Aleppo, whom the World Health Organization says are almost entirely without hospital facilities following the government's latest assault.

According to the UK-based Syrian Observatory of Human Rights, at least 103 people have died in rebel-controlled areas since the bombardment began on Tuesday, following a three week moratorium. Thirteen - including nine children - have died in the government-controlled west.

Both the White Helmets and the Observatory said the assault had continued into Sunday, with barrel bombs dropped on the al-Sakhour district.

Among the dead were a family of six, whom medics claim suffocated to death because the barrel bomb had been laced with chlorine gas.

The Observatory could not confirm that chlorine gas was used.