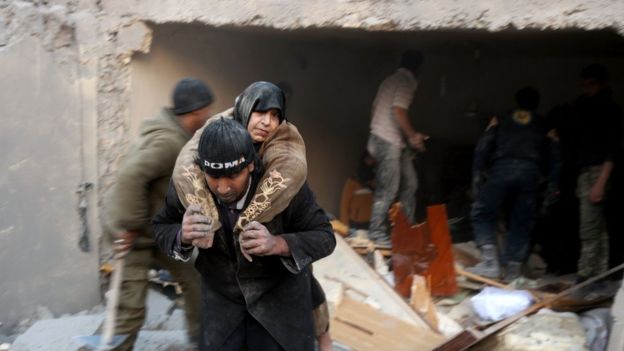 Emergency Relief Co-ordinator Stephen O'Brien said the figure had jumped from 486,700 to 974,080 in six months.

People were being "isolated, starved, bombed and denied medical attention and humanitarian assistance in order to force them to submit or flee," he said.

"Those maintaining the sieges know by now that this Council is apparently unable or unwilling to enforce its will or agree now on steps to stop them," he told the UN Security Council.

Newly besieged locations include the rebel-held Damascus suburbs of Jobar, Hajar al-Aswad and Khan al-Shih, as well as several areas in the eastern Ghouta agricultural belt outside the capital.

Mr O'Brien also told the Security Council that he was "more or less at my wit's end" over the situation in the divided city of Aleppo, where an estimated 275,000 people living under siege in rebel-held eastern districts face "annihilation".

A unilateral pause in aerial bombardment by the government and its ally Russia that began on 18 October had offered a "glimmer of hope", he said.

But the shelling of civilian areas in the government-controlled west by rebel and jihadist groups and the resumption of air strikes last Tuesday, he added, had returned "the city and its inhabitants to death and destruction once again".

"Over the past days, reports indicate that hundreds of civilians have been killed, injured or otherwise affected by the relentless attacks on eastern Aleppo."

Mr O'Brien said that, as of Sunday, there were barely any functional hospitals in rebel-held areas, as all the medical facilities were being "bombed into oblivion".

The more than 350 mortars and rockets launched indiscriminately into western Aleppo so far this month are meanwhile reported to have killed more than 60 people and injured 350 others.

A school was hit on the government side on Sunday, killing eight children.

"Let me be clear: we are not just seeing a resumption of violence in Aleppo, this is not business as usual," Mr O'Brien told the Security Council.

He warned that humanitarian conditions in eastern Aleppo had also "gone from terrible to terrifying" and were "now barely survivable".

The last of the food rations delivered by the UN before access was cut off in July were distributed on 13 November. Only a handful of rations from local NGOs remain, food in markets is scarce, and prices have sky-rocketed.

On Sunday, the Syrian government said it had rejected a proposal by the UN special envoy for Syria, Staffan de Mistura, for eastern Aleppo to be granted autonomy if jihadist fighters linked to al-Qaeda withdrew and the fighting stopped.

The United States has meanwhile warned that Syrian commanders and other officials deemed responsible for military attacks on civilians would be held accountable.

The US ambassador to the United Nations, Samantha Power, spoke of a dozen commanders and officers accused of directing attacks on civilian targets who Washington wants brought to justice.

"The United States will not let those who have commanded units involved in these actions hide anonymously behind the facade of the Assad regime," she told the UN Security Council in New York.