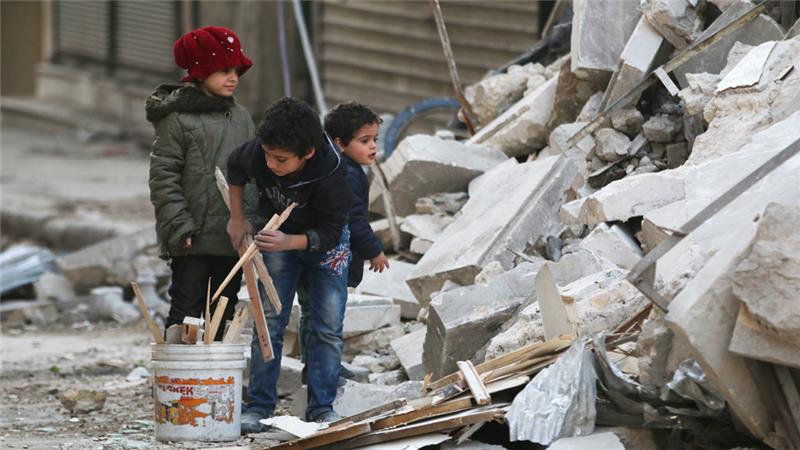 Dozens of civilians tried to flee rebel-held east Aleppo but were forced to retreat by gunfire, as the Syrian army and its allied militias on Wednesday pressed on with an offensive to recapture the whole city.

The government last week resumed its push to retake the east, where more than 250,000 civilians have been trapped under siege for months, with dwindling food and fuel supplies.

Recapturing the area would give President Bashar al-Assad's government perhaps its most important victory yet in the conflict, which has killed an estimated 400,000 people since it began in March 2011.

Several families attempted to smuggle themselves out of the besieged section of the city overnight on Tuesday, paying smugglers to take them from the Bustan al-Pasha neighbourhood into the Kurdish-held Sheikh Maqsoud area, before heading into the rebel-held Aleppo countryside.

"Two or three families paid smugglers and were attempting to cross when clashes and gunfire broke out and forced them back," Aleppo-based journalist Zouhir al-Shimale told Al Jazeera.

Syria's government accuses rebels of using residents as "human shields" and preventing them from leaving.

The UK-based Syrian Observatory for Human Rights said dozens of civilians tried to flee but were stopped from escaping because of fighting.

"But when the civilians tried to cross to the other side, gunfire broke out," Syrian Observatory director Rami Abdelrahman told AFP news agency.

On Tuesday, the Syrian army issued a statement accusing rebels of holding civilians as "hostages".

"Permit those citizens who want to do so to leave, stop using them as hostages and human shields, clear the mines from the crossings identified by the state," it said.

Rebel groups deny they are preventing civilians from leaving and accused the government of spreading "rumours".

"This has nothing to do with reality," said Yasser al-Youssef, from the political office of the Nureddin al-Zinki rebel group. "The regime is spreading rumours to try to undermine the resolve of the rebels and those who support them in Aleppo."

The Syrian army - backed by allied forces from Iran, Russia, and Lebanese group Hezbollah - launched a renewed assault on east Aleppo on November 15.

After days of heavy  bombardment, pro-government troops now control half of the strategic Masaken Hanano district in the northeast of the city, the Syrian Observatory said.

Capturing it would give the army line-of-fire control over several other parts of the east and effectively divide it in two.

The renewed bloodshed has stoked international concern, though there has been little sign so far of a plan to halt it.

French Foreign Minister Jean-Marc Ayrault said on Wednesday that backers of Syria's moderate opposition would meet in Paris in early December to discuss the situation.

He urged the international community to "stop averting its gaze" from the "terrible reality" of the conflict.

Save the Children called for an internationally monitored ceasefire to allow aid into east Aleppo and the evacuation of sick and wounded civilians.

"It is a moral outrage that the death toll of Aleppo's children continues to grow and seems only set to get worse, whilst so little action is being taken to end the bombing and hold warring parties accountable," the charity's Syria director, Sonia Khush, said.The latest government offensive has hit hospitals and rescue centres, and forced schools to close.