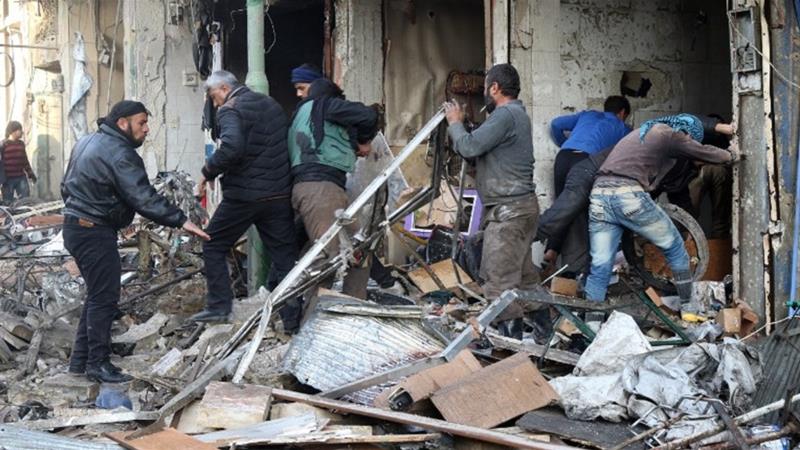 At least 73 people have been killed in suspected Russian air strikes on several areas of Idlib province in northwest Syria, the Syrian Observatory for Human Rights said, as government forces advanced in fierce clashes with rebels in east Aleppo.

The Britain-based monitor said on Sunday at least three locations were bombed in the northwestern province and most of the casualties were civilians.

In Maarat al-Numan, an AFP photographer saw local residents and White Helmets rescue workers trying to reach survivors in the rubble at a vegetable market hit in the strike.

The monitor also reported two additional deaths, one in an earlier strike on Maarat al-Numan and another in al-Naqir, also in Idlib.

And it said six civilians, five of them children, had been killed in a government barrel bomb attack on the town of al-Tamanah in the south of Idlib.

Russia began a military intervention in support of President Bashar al-Assad in September last year, saying it was carrying out strikes against "terrorists".

The northern Idlib province is mostly controlled by a powerful rebel alliance known as the Army of Conquest.

Most of Homs province is controlled by the Syrian government, but small parts of the countryside are controlled by a range of rebel groups.

More than 300,000 people have been killed in Syria since the conflict began in March 2011 with anti-government protests before spiralling into a bloody civil war.

The army and allied forces are nearly three weeks into an operation to recapture all of Syria's second city, divided between regime and rebel forces since 2012.

Tens of thousands of civilians have fled the offensive, which has made steady gains and threatens to deal Syria's opposition its worst defeat of the country's five-year civil war.

State television said on Sunday evening that the army had captured the districts of Karm al-Tahan and Myessar and advanced into the Qadi Askar neighbourhood.

State news agency SANA said the air force was dropping leaflets over rebel-held areas urging "militants to abandon their weapons and... allow civilians and the sick and wounded to leave".

At least 311 civilians, including 42 children, have been killed in east Aleppo since the government began its assault, according to the Observatory.

Syrian army spokesman Brigadier General Samir Suleiman said the military had regained control of 45 to 50 percent of east Aleppo, and he accused rebels of hiding among civilians.