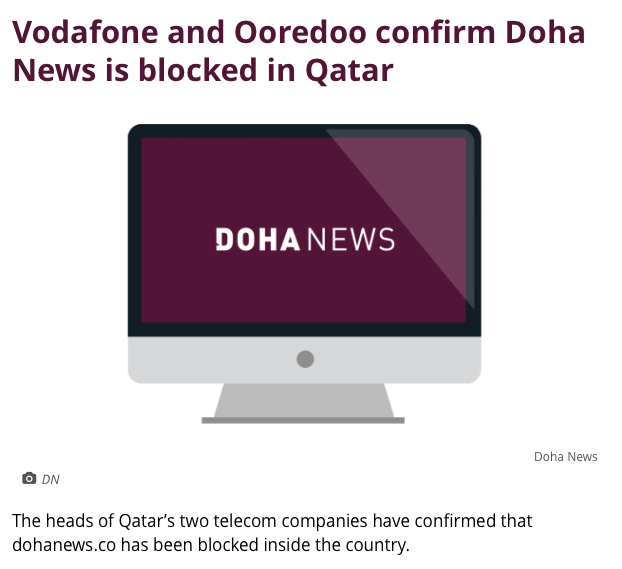 (Beirut) – Qatari authorities have blocked Doha News, the country’s only independent news website, in a move that undermines Qatar’s attempts to present itself as a center for media freedom in the Gulf region, Human Rights Watch said today. Doha News has been publishing news about Qatar online for six years, but on November 30, 2016, authorities there ordered Qatar’s two internet service providers, Vodafone and Ooredoo, to block the site, making it inaccessible to internet users in Qatar.

A Doha News spokesperson told Human Rights Watch that Qatari authorities said that the site’s reporting had upset “several” unnamed government ministries and cited concerns over its failure to formally register in Qatar. Doha News is registered and hosted in the United States, but its journalists live and work in Qatar. In October, Doha News published an editorial calling on the authorities to amend provisions of the 2014 cybercrime law to “preserve free speech and protect journalism in the country.”

“Doha News’s ability to report independently on important issues was unique in the Gulf region, and Qataris and non-Qataris alike benefited from its smart and sensitive coverage,” said Joe Stork, deputy Middle East director at Human Rights Watch. “It’s sad and disappointing that the Qatari authorities have shown themselves to be as thin-skinned as their hyper-sensitive neighbours in the region.”

On November 30, Doha News published an article stating that “our website has been deliberately targeted and blocked by Qatar authorities,” after the authorities and Vodafone and Ooredoo failed to respond to their queries about why their website had become inaccessible to internet users in Qatar. Vodafone stated in a December 4 letter to Doha News that they would be “pleased to unblock access once the requirements of the relevant concerned parties have been met,” and referred Doha News to the Ministry of Culture and the Ministry of Economy and Commerce. Ooredoo said in its December 4 response that the block related to “concerns raised regarding the licensing of your organization,” and referred Doha News to the same two ministries.

A spokesperson for Doha News described the decision to block the website as “a heavy-handed attempt to get us to fall in line with other local media outlets and stymie any attempts at critical reporting in the country.”

The government-funded broadcasting company Al Jazeera began broadcasting in 1996 and Al Jazeera English began operations in 2006. Al Jazeera’s Arabic channel does not criticize Qatar or neighboring countries, but Al Jazeera English has covered developments in Bahrain and has been at the forefront of international media reporting of the issue of abuse of migrant workers’ rights, including in Qatar.

The October 8 Doha News’s editorial on Qatar’s 2014 cybercrime law quoted a prominent local lawyer saying that Qatar’s cybercrime law was “a tool of intimidation” and “like a knife held close to the necks of writers, activists and journalists.” The 2014 law criminalizes spreading “false news” on the internet and provides for a maximum of three years in prison for anyone convicted of posting online content that “violates social values or principles,” or “insults or slanders others.” In July, Qatar authorities detained a Doha News journalist overnight after a person convicted of a serious crime complained about an article that he said had harmed his reputation.

Qatar has ratified the Arab Charter on Human Rights, article 32 of which protects the right to freedom of expression. Although Qatar has not ratified the International Covenant on Civil and Political Rights, the Human Rights Committee, the body of independent experts which monitors implementation of the treaty, has provided an authoritative interpretation of article 19, on which the Arab Charter’s provision is based. It has stated in its general comment 34 that the prohibition of “a site or an information dissemination system from publishing material solely on the basis that it may be critical of the government or the political social system espoused by the government” constitutes a violation of the right to free expression.

“Qatar doesn’t regulate the internet and it’s absurd to block a website and say the website is not registered,” said a Doha news spokesperson. “How many other websites on the internet have registered in Qatar? There are no two ways around the fact that the government has chosen to block access to the site because they aren’t happy with everything that we publish. And that amounts to censorship.”