UNICEF: One child dies every 10 minutes in Yemen 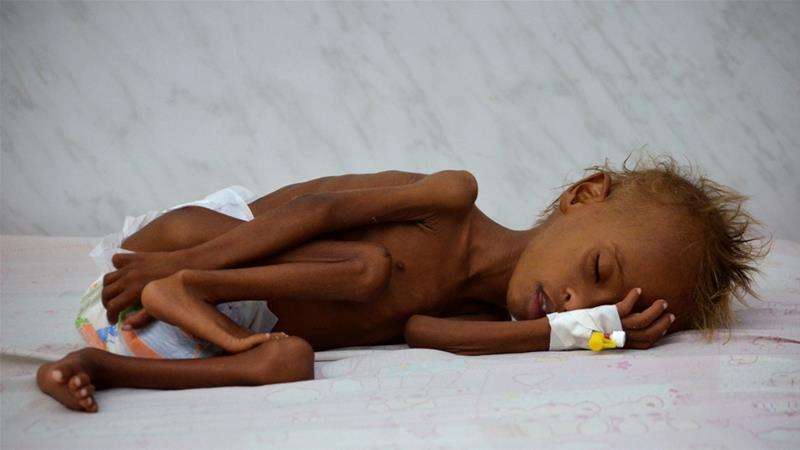 More than 400,000 children are at risk of starvation in Yemen, with nearly 2.2 million in need of urgent care, according to the UN children's agency UNICEF.

New figures indicate that hunger among children has reached an "all time high," with at least 462,000 suffering from severe acute malnutrition - a drastic increase of about 200 percent since 2014.

In a report published on Monday, UNICEF said at least one child dies every 10 minutes because of malnutrition, diarrhoea and respiratory-tract infections.

"The state of health of children in the Middle East's poorest country has never been as catastrophic as it is today," Meritxell Relano, the agency's acting representative, said in a statement.

"Malnutrition in Yemen is at an all-time high and increasing."

Severe acute malnutrition is a major cause of death for children under the age of five, and is apparent when a child has a very low weight for their height and becomes visibly frail and skeletal.

Saada governorate, the most heavily bombed region in Yemen, has the world's highest stunting rates among children, affecting eight out of 10 in some areas, it said.

Stunting - where a child is short for their age - is another sign of chronic malnourishment and has irreversible consequences for both physical health and cognitive function.

The Arabian Peninsula country has been torn apart by conflict since 2014, when Iran-allied Houthi fighters, in cooperation with troops loyal to former president Ali Abdullah Saleh, captured large expanses of the country, including the capital Sanaa.

A coalition assembled by Saudi Arabia launched an air campaign against the fighters in March 2015. Since then, more than 10,000 people have been killed and millions driven from their homes.

The conflict has also taken a devastating toll on Yemen's health system which is on the verge of collapse, UNICEF says in the report.

Humanitarian groups have struggled to deliver aid to large parts of the country due to the fighting and air strikes, with the medical aid charity Doctors Without Borders, calling the situation "extremely challenging."

Several medical facilities have been damaged or destroyed, with the Arab coalition blamed for raids on medical centres, schools, mosques, factories and homes.

The coalition has also imposed a sea blockade on Yemen and air strikes have led to a virtual lockdown of Sanaa.