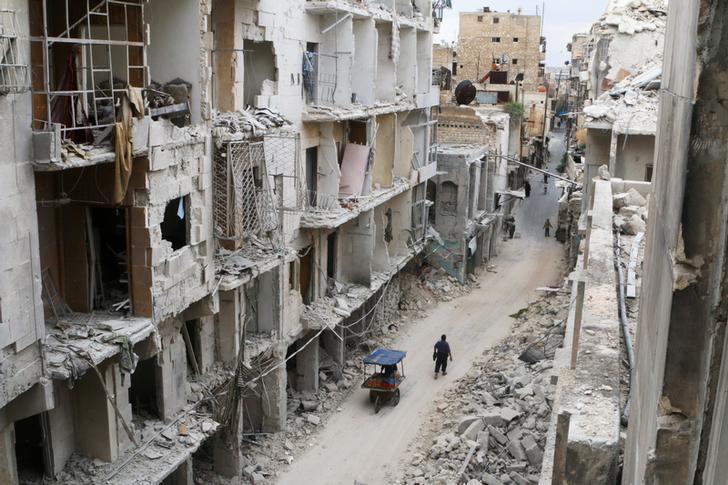 (New York) – Syrian government and allied forces should immediately take steps to protect civilians and captured fighters as the government retakes control of Aleppo after a deal was reached with armed opposition groups there, Human Rights Watch said today. This includes allowing the safe evacuation of civilians and aid deliveries, and protecting civilians from summary executions and arbitrary detention.

The United Nations General Assembly should urgently mandate a UN monitoring team to travel immediately to areas of eastern Aleppo, now under government control, to deter future abuses, document crimes that have been committed, and visit detention sites.

“It has been heart-wrenching to hear the desperate pleas for protection from civilians stuck in the inferno that is Aleppo,” saidLama Fakih, deputy Middle East director at Human Rights Watch. “The Syrian authorities should ensure that civilians are allowed to safely leave the city and to go where they want.”

Human Rights Watch has received worrying reports about possible reprisals against civilians in areas now held by government forces. The UN has said that it has received reports that pro-government forces executed 82 civilians in neighborhoods that have recently come under government control. Local activists told Human Rights Watch that they have heard similar reports. Human Rights Watch reached a Syria Civil Defense member, a local doctor, and a journalist still in opposition-held Aleppo, each of whom said that they had received reports that entire families had been executed in areas recently taken by government forces. The neighborhoods included al-Fardous, Bustan al-Qasr, al-Saleheen and al-Kallaseh.

While Human Rights Watch has not been able to verify these reports, it has previouslydocumented that Syrian government forces have committed mass executions of civilians in areas that have come under their control.

“Today I saw two corpses in the street covered in cloth,” Ahmed Said, a nurse, told Human Rights Watch. “They hadn’t been moved because no one knows who their relatives are. There’s no room in the cemeteries to bury the bodies anymore.” He said that families in eastern Aleppo were rationing bread to feed their children.

The spokesman for the UN High Commissioner on Human Rights has said that hundreds of men may also have disappeared after leaving eastern Aleppo for government-held areas, also raising concerns about extensive arbitrary detention, and enforced disappearances.

The government should ensure the protection of fundamental rights in security screenings and detention of people who were living under opposition control in eastern Aleppo. Authorities should ensure that the screening process is limited to a period of hours, and that anyone held longer is treated as a detainee and entitled to all protection of detainees under international law. No one should be presumed to be a fighter based on their age or gender absent individualized evidence of criminal wrongdoing. The authorities should allow independent monitors access to all screening and detention centers.

Human Rights Watch has also called on the Syrian government and Russia to immediately and without conditions facilitate the delivery of aid to Aleppo.

“I don’t know where to even begin telling you about how bad the situation is here,” a local journalist, Adeeb Mansour, told Human Rights Watch, his voice breaking. “What can anyone do for us? Please make our voices heard to the UN, to anyone who will listen. We just want to get our women and children out of this danger.”

Building on the resolution it adopted last week with an overwhelming majority of 122 members of the UN, the General Assembly, once convened in an emergency special session, should reiterate its demand for an end to unlawful attacks in Syria and call for immediate access for independent monitors.

If the Security Council remains incapable of initiating an emergency special session, members of the General Assembly should do it themselves, Human Rights Watch said.

In connection with the ground offensive, the Russian-Syrian coalition has conducted an intensive bombardment campaign of Aleppo, which included indiscriminate attacks, killing hundreds of civilians. A Human Rights Watch investigation of aerial attacks in September and October found that the coalition had committed war crimes. Human Rights Watch also documented that armed opposition groups indiscriminately attacked government-controlled parts of Aleppo.

The General Assembly should create a special investigative mechanism mandated to collect and preserve potential evidence for future criminal prosecutions.

“The risk of atrocities in Syria is not over with the government takeover of Aleppo,” Fakih said. “Unless combatants and commanders on all sides can see that there could be consequences for their unlawful actions, we will see more crimes replay themselves in other places.”