Life in Tunisia's closed refugee camp: 'I lost my mind' 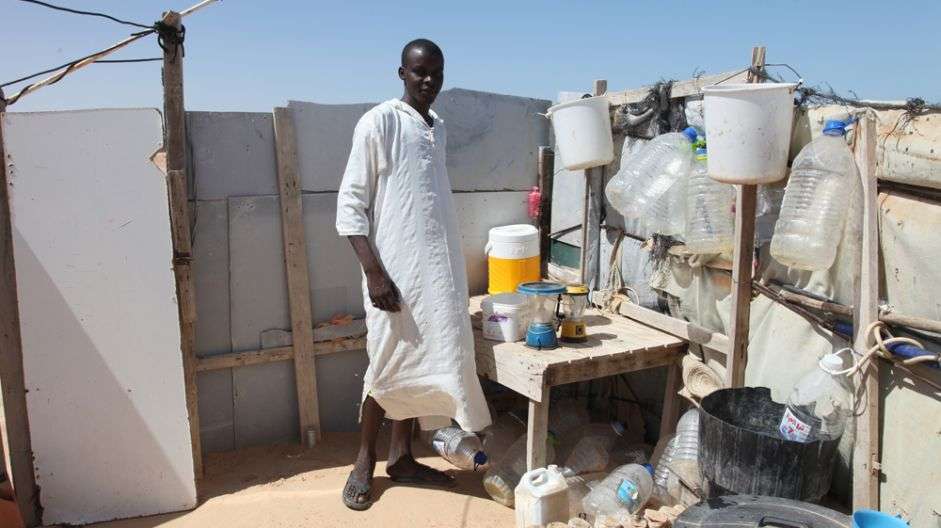 Choucha camp, Tunisia - Clad in a long, white robe, Ali Ahmed Ali stares into the distance from his worn-out tent. A friend, also from Chad, sits silently next to him.

"Everyone is tired here," Ali, 27, tells Al Jazeera in a low voice. "We have nothing to talk about any more. We are just waiting."

These men have been living in Choucha camp, in a windswept piece of desert in southern Tunisia, since its foundation by the United Nations refugee agency (UNHCR) in early 2011. Ali has been on the run for years: He fled his village in Chad's border region near Darfur, Sudan, in 2005 after it came under attack from armed gangs. He lived in Libya for years, earning money by cleaning government buildings, but was forced to flee again as violence broke out during Libya's 2011 uprising - and from there, he crossed the border into Choucha camp.

But in June 2013, after relocating several thousand refugees from Choucha to western countries, UNHCR determined that its mission was complete and closed the camp, removing the toilets, showers, electricity and running water.

Around 700 people - whose refugee claims were denied but who believed their lives would be in danger if they returned home - remained in the camp, a number that his since dwindled to about 60.

"During Ramadan, I lost my mind," Ali says, with a bag containing medicines to treat depression, anxiety and schizophrenia laid out in front of him. "They say I walked away into the desert and burned myself, but I can't remember ... Since I fell ill, I've just begged for food from the Libyans passing by on the road. Anyway, these days there is little work."

The Chadians with whom he shares his tent have gone to the nearest city of Ben Gardane, 20km away, to obtain casual labour whenever they can, constructing houses or loading lorries. Payment is around $10 a day.

The oldest and only Egyptian man in the camp, 68-year-old Ali Ali, sits a little further away in a small garden around the tent, made from a few desert plants, stones and plastic bottles. He says he was tortured in Libya before coming here, accused of "bringing the revolution from Egypt". He says he has tried to commit suicide twice.

"Snakes and cockroaches swarm under our beds. It is inhumane here," he tells Al Jazeera.

Chamseddine Marzoug, a fisherman and volunteer for the Red Crescent from the nearby city of Zarzis, goes to the camp each month on his own initiative to bring medicines and to drive sick people to the hospital. He acknowledges that the refugees' mental health is declining.

"Many men in Choucha are traumatised and depressed," Marzoug says.

Oliver Tringham, a British refugee advocate affiliated with AMERA International who has been helping refugees in the camp since it opened, says it is clear that they need help.

"I think the vast majority of the Chouchans have been suffering from PTSD [post-traumatic stress disorder], which has manifested in their physical wellbeing," Tringham tells Al Jazeera.

Parker, a 36-year-old refugee who declined to give his last name, and Mamadou Sylla, 28 - both from the Ivory Coast - sit in front of one of the most well-built tents, which they jokingly call the "White House". Parker worked for a year as a welder in Tunis, but recently decided to return to Choucha, because he never received more than half of his promised salary of $272 a month.

After the closure of Choucha, the Tunisian government announced that the people who remained in the camp could get residency permits.

"A few hundred wanted to stay here and applied for residency, but never received it," Tringham says.

Moez Ben Dhia, a former adviser to Tunisia's minister of social affairs, tells Al Jazeera that many of the refugees did not meet the legal requirements - such as holding the necessary identification papers - for obtaining residency permits. Plans were made to amend that law, he said, but that never happened owing to the political tumult in Tunisia.

In addition, Ben Dhia said, many of those who remained in the camp rejected staying in Tunisia, instead expressing a desire to travel to Western countries. Others declined to give fingerprints out of fear that they could be sent back home, he said.

"The camp does not exist for us any more," Hilmi Tlili, a current official with the Ministry of Social Affairs, tells Al Jazeera inside his Tunis office. "It has been closed for more than three years. It is not our responsibility any more."

Parker and Sylla say they do not understand why they were not given asylum by UNHCR, expressing hope that the agency will reopen their case files. Sylla says that rebel fighters in the Ivory Coast killed his mother, who was against them, but "UNHCR did not believe my story. The interview went fast. I did not have the chance to explain my situation well."

Tringham maintains that there were clear deficiencies, including translation problems, in the refugee determination procedure at Choucha, a position rejected by the agency.

"Mistakes are not likely to happen," Felicitas Nebril, UNHCR's deputy representative in Tunis, tells Al Jazeera. "The asylum application is a process, not just one interview and one interviewer. There are other interviewing officers and translators, as well as appeals procedures that have taken place ... [Those still in Choucha] have to face reality. They can go back home if they wish, or apply for a residency permit like any other foreigner."

The Tunis-based Forum Tunisien pour les Droits Economiques et Sociaux, an NGO that was against the closure of the camp, has asked UNHCR to reopen the remaining cases.

"The fact that they are still in that terrible place proves it is dangerous for them to return to their countries," Romdhan Ben Amor, a spokesperson for the forum, tells Al Jazeera. "Nobody cares about them. The camp has caused the government and the international organisations a real headache."

Doctor Mongi Slim of the Red Crescent in Zarzis, however, says that the refugees at Choucha can "go to our shelters in Zarzis or Medenine and receive food and medical care, but they prefer to stay in the camp to show the media they are victims". He adds that the government should clear out the camp and move the residents elsewhere for humanitarian and security reasons.

Back in the camp, many of the tents have been abandoned or collapsed into heaps amid the ruthless winds.

"Most people went to Italy in small boats," Ali Ahmed Ali says, noting that he sometimes receives messages from friends in France or Sweden. Others have simply disappeared: "Perhaps they drowned, or died in the desert in Algeria."

Benedict Joseph, a 33-year-old refugee from Liberia, passes by Ali's tent on his way to the highway, hoping that a Libyan man, who often drops off baguettes in the afternoon, will come today as well. He usually eats only once a day.

"We still have hope that we can go to a Western country," he says, smiling. "How else can we stay alive? Here, you learn to be patient."