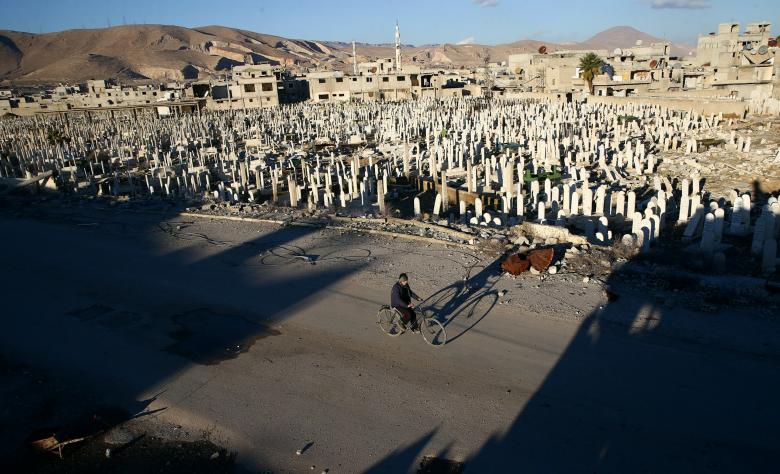 Air strikes escalated on Sunday in a rebel-held valley near Damascus containing the Syrian capital's main water supply, a day after insurgents and the government failed to agree a plan to repair the springs knocked out of service two weeks ago.

Several rebel groups warned that the escalation effectively meant the collapse of shaky ceasefire brokered by Russia and Turkey to pave the way for peace talks they hope to convene in Kazakhstan.

The government and allied fighters from the Lebanese group Hezbollah launched an offensive two weeks ago to take back Wadi Barada, a valley overlooked by pro-government military positions where springs provided water to 4 million people in the capital.

The government says it wants to enter the valley to secure the water supply to the capital. Rebels and local activists say pro-government forces are using the water issue to score a political victory weeks after the fall of Aleppo city, using siege and bombardment to force fighters into agreeing to leave.

Through a series of so-called settlement agreements, sieges and army offensives, the Syrian government, backed by Russian air power and Iran-backed militias, has been steadily suppressing armed opposition around the capital.

"There is no longer any point in a ceasefire that is adhered to by one side. I think in the next few hours there will be an important development and a (decision) to freeze (enforcing) the ceasefire," said Mamoun Haj Musa, spokesman for the Free Syrian Army-affiliated Suqur al Sham rebel group, which is signatory to the ceasefire deal.

Syrian rebel groups said last week they had decided to freeze any talks about their possible participation in the negotiations unless the Syrian government and its Iran-backed allies ended what they said were violations of the ceasefire.

They say Moscow was not putting pressure on the militias or the Syrian army to abide by the ceasefire.

The Syrian Observatory for Human Rights said at least 24 air strikes had hit the valley since Sunday morning, after a lull since Saturday morning during which a new round of negotiations over repairs took place.

A military media unit run by the Hezbollah said on Sunday it was suspending a ceasefire in the Wadi Barada area because rebels were disrupting negotiations and had opened fire on repair teams.

Later they said army tanks had hit Islamist militants near the town of Kafr Zayt in the valley.

The Wadi Barada media office, run by local activists connected to the negotiating team, said it was untrue that any repair team had entered the valley, saying engineers had waited at the area's border while negotiations went on.

The Hezbollah-affiliated media unit also said it was the Syrian Islamist militia formerly called the Nusra Front that fired on the teams. The Syrian government has said Nusra Front, now called Jabhat Fateh al-Sham, and Islamic State were excluded from a nationwide ceasefire which came into force 10 days ago.

The Wadi Barada media office denied the Nusra fighters were present in the valley.

Rebels in Wadi Barada have allowed government engineers to maintain and operate the valley's pumping station, which supplies 70 percent of Damascus and its surroundings, since they took control of the area in 2012.

Fighters have, however, cut water supplies several times in the past to put pressure on the army not to overrun the area.

The United Nations said the spring was damaged two weeks ago because "infrastructure was deliberately targeted", without saying who was responsible, and warned shortages in the capital could lead to waterborne disease outbreaks.

Rebels and activists say the spring was damaged by pro-government force bombardment. The government said rebels polluted the spring with diesel, forcing the state to cut supplies.

Ali Haidar, who as national reconciliation minister has been responsible for negotiating local truce deals which see rebels given safe passage out of areas which the government then moves into, told Sham radio station on Saturday the spring would remain under state control after repairs, "to prevent water again being cut to the capital".

Activists in the valley warned on Saturday of deteriorating humanitarian conditions in the mountainous valley, which they say has a population of 50,000 of local people and 30,000 internally displaced Syrians.

The United Nations estimates 45,000 people live in the Wadi Barada area, and thinks at least 7,000 people have been displaced form the area in recent fighting.