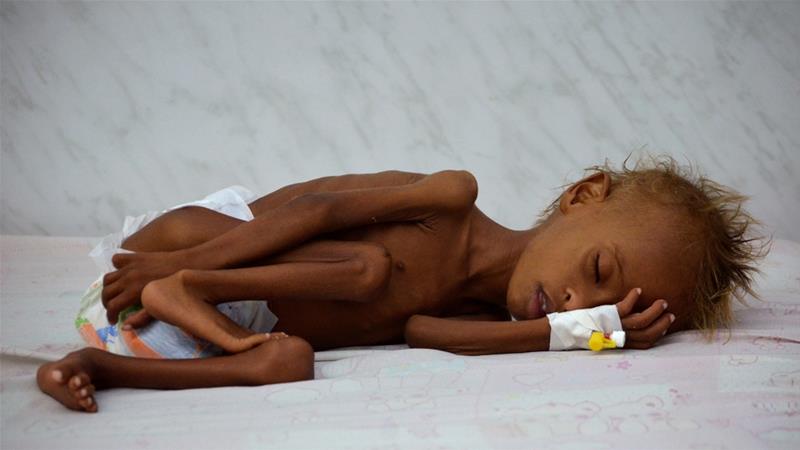 The 45-year-old Sanaa resident has no job and no money to buy food. Today, there is just one place to which he knows he can turn for help: The dump.

"For several months, I have been out of work. I have not earned one single rial," Abdulla told Al Jazeera. "This has forced me to provide for my family by any means, including searching for food in the rubbish dumps or asking people for aid."

Living in Sanaa's Bait Bos neighbourhood, Abdulla roams the city daily, checking through rubbish piles to find something for himself and his family of 10 to eat.

"It is my daily attempt to stave off the death of my family by hunger," he explained. "I have become a frequent visitor of the rubbish dump. There, I also see my likes."

Millions of people have borne the brunt of Yemen's civil war, nearly into its third year. Massive food shortages have gripped the Arab world's poorest country, with the World Food Programme estimating that around 14 million Yemenis are food insecure, half of whom are classified as severely food insecure.

"Development has ceased in the country. Businesses have also shut down. This has largely contributed to augmenting the deterioration of the food situation in Yemen," Shamakh said. "Additionally, the conflict has cost a lot of Yemenis their daily jobs … Today, some civilians in Yemen do eat from the rubbish and take the leftovers they find at restaurants. This helps them survive."

Prior to the war, Yemen was already importing 90 percent of its food products from abroad, but the importation process has stalled amid the country's ongoing conflict.

The economic situation for Yemeni families also worsened late last year, after the country's internationally recognised government relocated the Central Bank of Yemen from Houthi-held Sanaa to Aden, a move aimed at dealing the rebels an economic blow. However, the repercussionshave affected all state employees, who have not received their salaries in months.

"If the status quo goes on unchanged, the food insecurity issue will be more worrying," Shamakh said. "This will lead to further security imbalances and robbery of public and private properties."

Back in Sanaa, 12-year-old Bashar has become another victim of Yemen's food crisis.

"I go out to the street every day, asking people for aid. Some give money, and some do not," Bashar told Al Jazeera, noting that he begs and searches through rubbish for food to feed his family. "I have four siblings. My father died many months back."

The United Nations has estimated that more than 370,000 children are at risk of starvation in Yemen, while more than two million are out of school due to the ongoing war.

The humanitarian crisis has prompted some local initiatives to help mitigate the suffering of the neediest Yemenis. In Sanaa, the Hand in Hand youth programme coordinates with supportive restaurants to get food aid distributed.

"Several Yemeni families are living in difficult times when it comes to food. Many families are struggling to get even enough bread to subsist," said Abdulfatah al-Hamadi, the head of Hand in Hand.

In Sanaa, Hand in Hand has already aided hundreds of families struggling with food insecurity by providing their daily meals, he added.

However, not all families are willing to ask for aid.

"Some families would prefer to die than to ask others for food," Hamadi said. "The initiative has tried to support them. Over one million government employees used to receive salaries prior to September … When the salaries were halted, the people have felt the hardest suffering."

Their lives torn by war and politics, many ordinary Yemenis are simply hoping to return to a form of normalcy.

"I want to live in peace," Abdulla said, "and I want to see my children safe from hunger, and not dependent on aid or dumps."