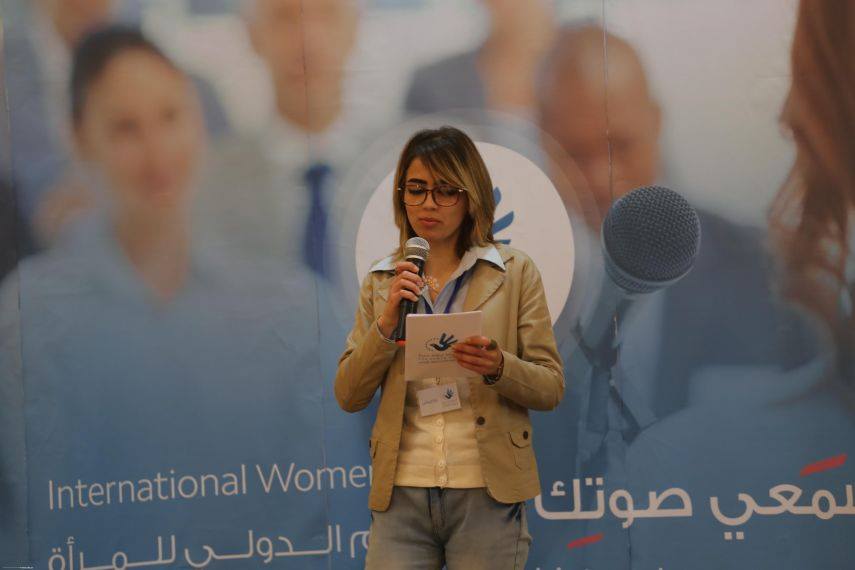 “Listen to Your Voice” is the theme of this year’s commemoration of International Women’s Day by the Euro-Mediterranean Human Rights Monitor in Gaza. An event organized by Euro-Med highlighted the need to challenge the stereotypical image of Arab women, featuring several women who talked about their stories of overcoming obstacles and achieving their dreams against all odds in a highly patriarchal community.

In an opening address, Euro-Med Monitor’s advisor for women’s affairs, Aroub Soubh from Jordan, talked about women's role in building community and fostering resilience. Yet, women everywhere continue to face higher unemployment and receive lower wages than men. "Accelerating their participation in society as equal partners with men would strengthen the “fabric” that holds people together during war and other strife."

Among the role models featured were Palestinian Salwa Suror, the first woman bus driver in Gaza. She has run a kindergarten since 2005. Although she said the community underestimated her at first and treated her awkwardly, “over time people get used to differences and accept them.” She added that many women have told her they wished to have the courage to be as independent as her in pursuing her dreams.

The second speaker was Rateeba Ahel, a Palestinian-Syrian refugee who fled the Yarmouk refugee camp in Syria to Gaza, where her husband was born. Today, she runs her own restaurant and bakery. "I've never given up; I remain determined and today my bakery project has grown bigger and earned a reputation," she said.

She was followed by journalist Israa Al-Bheissi, a wife and mother of four who continued to report for two TV stations during the 2014 Israeli war on Gaza. She talked about how she has had to learn to control her emotions as she works side-by-side with men to cover Israeli brutalities. Her one goal: uncovering the truth.

“My success at work doesn’t mean I failed at home or school; we have to manage and take responsibility for each,” Al Bheissi said.

The final speaker was Naheil Mhanna, a mother, artist and playwright. She explained that despite her responsibilities and burdens on her time, “I tried to turn my weaknesses into strengths.”

At the end of the event, Rawan Abu Asad, one of Euro-Med Monitor’s project managers, reviewed the organization’s achievements in supporting women’s rights. Examples of Euro-Med Monitor’s projects include, We Are Not Numbers, a youth storytelling initiative, and the Women’s Leadership Incubator, which was recently launched to promote women’s empowerment and to encourage NGOs to nurture women leaders among their employees.

“ For International Women’s Day, we took #Listen2UrVoice as a motto because we believe women need to listen to their instincts and ignore those who seek to silence them and stand in their way to becoming independent and self-aware,” Abu Asad said. “This year, ‘listen to your voice’ isn’t just a slogan; it is a series of programs that will targeting a large number of women in the MENA region, urging them to strive for their goals no matter what the obstacles.