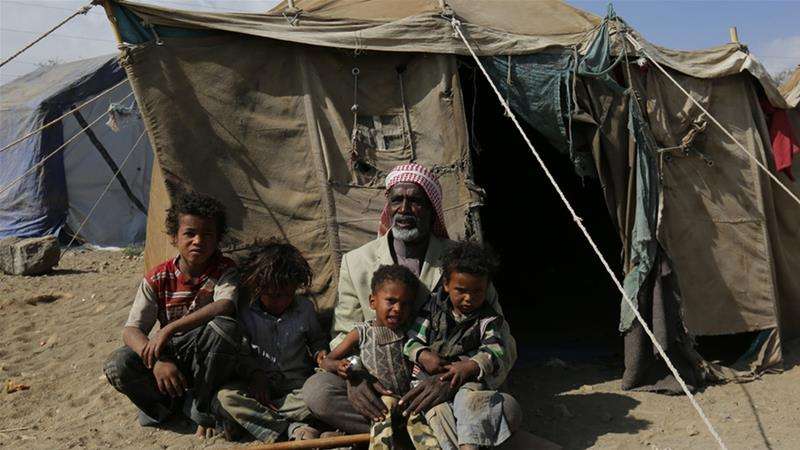 A new campaign is aiming to shed light on a lesser-known side of Yemen's humanitarian crisis: the trend of refugees fleeing into the country.

The campaign - launched last month by the United Nations refugee agency, UNHCR - aims to raise awareness, including through the song Dangerous Crossings, in which prominent Somali, Ethiopian and Egyptian artists warn of the dangers of sea crossings toYemen.

"To leave like this is tragic / To stay away heart-breaking / But despite the risks, the desperate tide rises / Like an unlucky child fallen from the nest / Far from home and everything familiar / How many tears will you cry?" states the song, released last month via social media.

"[Those fleeing into Yemen] are aware there is a conflict, but I just don't think they know how bad it is," Shabia Mantoo, a spokesperson at UNHCR's Sanaa office, told Al Jazeera. "Yemen is a very generous country and people have traditionally sought protection here."

Yemen is currently home to more than 270,000 refugees and asylum seekers, predominantly from Africa, according to UNHCR. In 2016, at least 117,000 more arrived, the agency said.

The influx has alarmed humanitarian workers in Yemen, where the war-ravaged infrastructure is already under heavy strain. The ongoing war has killed thousands of people, displaced millions and brought the country to the brink of famine.

Amid the sharp decline in safety in Yemen, the massive refugee influx - which comes amid deteriorating conditions in the refugees' countries of origin - is alarming, Mantoo said.

"They don't have enough information. They are misled by smugglers and traffickers about what lies ahead," she said. "They are making incredibly dangerous journeys across the Red Sea and the Gulf of Aden, and then arriving in the middle of a warzone."

Women and children are at particular risk of sexual violence and exploitation by human smugglers along the way, aid workers say. Refugees have reported experiencing various kinds of trauma during their journeys, including being robbed, shot at by militias, forced into labour or deprived of food and water.

Omar Arte, a refugee from Somalia, recalled being crammed into a small fishing boat with a capacity of perhaps 25 people, which instead was filled with "more than 100 people packed like small cartons. [In 24 hours of travel, there was] no room for stretching your legs."

To avoid having the boat capsize, the smugglers barked at all of the passengers to remain still, he said.

"The men gave orders that no one should stand or move for the next 18 to 24 hours, or else you will be thrown into the deep seas. The men operate the boats with impunity," Arte told Al Jazeera. "I personally saw the men sexually harassing the girls."

Once in Yemen, some refugees travel elsewhere, including other Gulf countries, in search of work. For those who remain in Yemen and wish to claim asylum, the process can take up to five years. In the meantime, work opportunities are limited in the war-torn country.

"Conditions are not particularly conducive for asylum at present," Mantoo said. "For new arrivals seeking international protection, access to asylum systems in Yemen is extremely challenging, and individuals may be unable to register their asylum applications or have their presence documented by the authorities, particularly in the north of the country."

Music producer George Acogny, who produced the multilingual song Dangerous Crossings, noted that the goal of the new campaign was to awaken potential refugees to the hazards of the perilous sea journey.

"Every time I play the song to someone, they start weeping," Acogny told Al Jazeera. "It's difficult not to get touched emotionally, because it taps into a part of the crisis that's not so obvious."