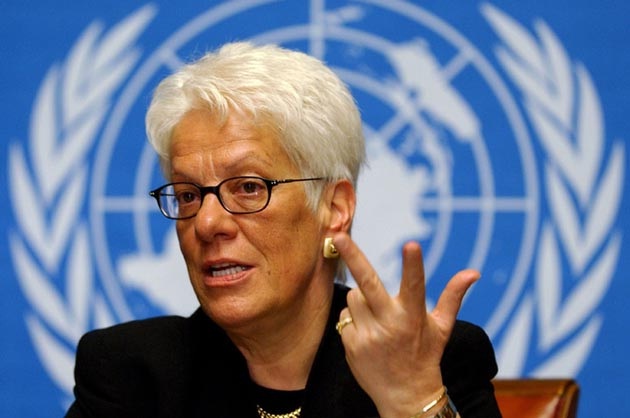 GENEVA- The Euro-Mediterranean Human Rights Monitor considers the resignation of International Commission of Inquiry in Syria member, Carla del Ponte, as a confirmation of the inability of the international decision-making system to stop the flow of human rights violations in Syria.

"The repeated war crimes in Syria over recent years have tested the efficacy of the UN Security Council to reveal that it is only a dysfunctional instrument of political posturing among the world's greatest powers," says Euro-Med Monitor .

The 70-year-old Swiss said: “she had decided to leave her post after her mission became "impossible" due to the lack of political support from the UN Security Council.”

Earlier, Ponte announced that she had "surrendered" and would leave the commission of inquiry which "lacks the support of any political will." She also stated that she has “no power as long as the Security Council does nothing. We have no power and there is no justice for Syria," she added.

The International Commission of Inquiry said in a statement that Ponte informed her colleagues in June of her decision to resign in the near future, stressing at the same time that the Commission's investigations will continue.

With the resignation of Ponte remains only two investigators in the UN Commission of Inquiry on Syria, the Brazilian human rights expert, Paulo Sergio Pinheiro, and the American, Karen Koning AbuZayd.

The Commission was formed on August 2011 by a resolution of the UN Human Rights Council and mandated to investigate all alleged violations of international human rights law since the beginning of the crisis in Syria on March 2011. The Commission has provided periodic reports of human rights violations in Syria, but its appeals for compliance with international law were often ignored.

The inability of the Security Council to intervene in threats to global security and peace serves not only to give a green light to war crimes and human rights abuses, but also to cultivate a suitable environment for the growth of violent extremism and terrorism that affects the entire world.

The current failure in Syria is no exception. The continued blanket use of the veto in the Syrian crisis has jeopardized the council’s long-standing legitimacy, hindering its ability to act as the major international decision-making body.

The Euro-Mediterranean Human Rights Monitor calls on the UN General Assembly to reactivate the "United for Peace" mechanism adopted by GA Resolution 377, which allows the General Assembly to consider an issue when the Security Council fails to approve appropriate measures to maintain international peace and security.

Euro-Med Monitor  also stresses the need to: "review the practice of veto power in cases in which an explicit threat to global peace and security is proven and  adopt a clause allowing cases of war crimes, crimes against humanity and genocide to be brought to the attention of the International Criminal Court irrespective of decisions taken by the Security Council."

The Euro-Mediterranean Human Rights Monitor will, in a few days, be issuing a report, under the title " Is the Security Council able to Protect Global Security?" that focuses on the consequences that come with the crippling power of the veto by members of the Security Council.

The report includes a set of recommendations that urge UN member states, particularly those in the General Assembly, to reform the rules governing the Security Council, or at least create alternative means to address extreme situations without the consensus of that body.

Since the eruption of the Syrian crisis, 13 resolutions have been adopted by the Security Council related to the deteriorating situation since 2016, and which condemned the use of chemical weapons by the Syrian government against civilians.

Throughout its history, the veto power has restricted the Security Council’s ability to intervene in international crises and human rights violations.