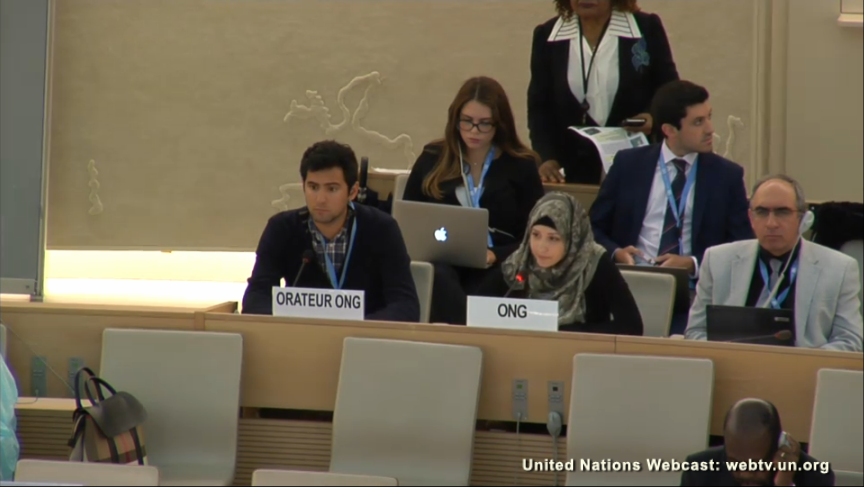 Geneva- Before the UN Human Rights Council in its 36th session, the Euro-Mediterranean Human Rights Monitor and African Cultural International made an oral statement on arbitrary measures made by the Israeli authorities against the Islamic and Christian religious sites in the occupied city of Jerusalem as well as arbitrary restrictions on freedom of worship by Saudi Arabia.

In their speech before the Human Rights Council, Euro-Med Monitor's Legal Researcher, Ayat Osama referred to the recent Israeli court decision to support the appropriation of churches' properties, the draft proposed in Knesset to confiscate property belonging to churches, the closure of the Islamic Waqf headquarters in the Al-Aqsa Compound, and the demolition of a Muslim cemetery, converting it into a park and biblical garden instead.

In their address to the Council, the two organizations drew attention to the fact that some regimes in the Middle East continue to exercise a form of negative custodianship over places of worship and treat them as private property, although freedom of worship and non-discrimination on the basis of religion is one of the established rules of international law.

Since the beginning of the Gulf crisis, Saudi Arabia has taken several measures that hinder the travel of Qatari nationals to Saudi Arabia. Among these measures are the restrictions placed on Qatari Muslims who seek to perform Hajj. Saudi Arabia also attempts to place undue pressure on some Muslim-majority African countries to take certain political stances in return for increasing the number of people permitted to travel to Saudi Arabia for Hajj.

Euro-Med Monitor and ACI stress the need to keep religious symbols away from political matters and called upon the council to place emphasis on the right to freedom of thought and religion, including both freedom of worship and the practice of worship without the interference of any restrictions. Both organizations also called on the Special Rapporteur on freedom of religion to take action and make fact-finding visits to Israel and Saudi Arabia to address violations of the right to freedom of religion.