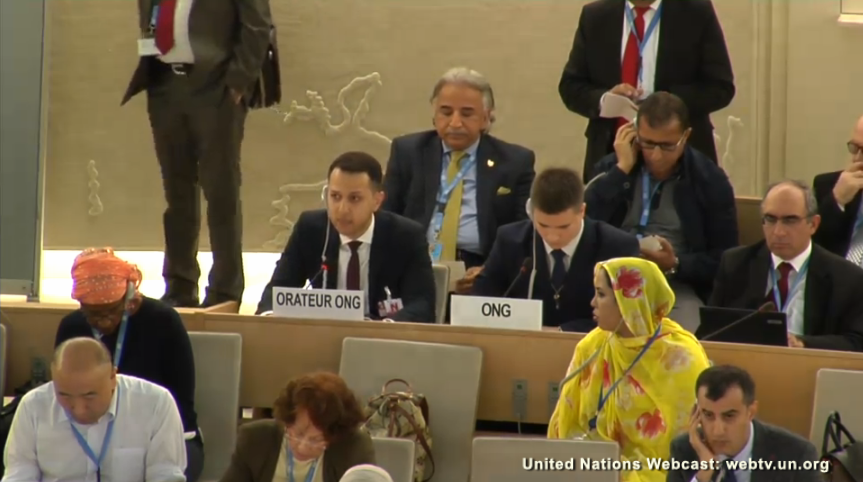 Geneva – The Euro-Mediterranean Human Rights Monitor has completed its participation in the UN Human Rights Council at its thirty-sixth session, held in Geneva on September 11 until September 28. Throughout this time, the Euro-Med Monitor organized three side events on the sidelines of the Council's sessions. Its researchers participated in six interventions on various issues surrounding the status of human rights in the Arab region during other side events organized by partner organizations. Euro-Med Monitor delivered three oral statements to Council members on violations of the freedom of worship in the Middle East, the humanitarian situation in Yemen and the impact of the Gulf crisis on civilians.

Euro-Med Monitor focused on the Arab region's decline in public freedoms and called on the Council and Member States to work hard to prevent further violations and to spare civilians the aftermath of armed conflicts and political disputes, explained Sandra Owen, Euro-Med spokeswoman.

In a side event on human rights crises in the Arab region, Euro-Med Monitor addressed the impact of the Gulf crisis on civilians and its degradation of human rights in countries that are parties to the crisis. Euro-Med Monitor also called on Saudi Arabia, UAE, Bahrain and Egypt to halt measures negatively affecting civilians’ social, economic and political rights.

Furthermore, Euro-Med Monitor addressed the violations of children’s right to education in Iraq, revealing that the military operations in the cities and towns of Iraq led to a change in educational curricula, forcing it to in accordance with the beliefs of the groups that control these areas. In addition, the fighting led to the destruction of a large number of schools and to the reduction of staff as they are forced to immigrate or are detained. Such measures eventually left students unwilling to complete their education.

The international human rights organization criticized the arbitrary measures taken by the Israeli authorities against Palestinians, especially with regard to access to Islamic and Christian holy sites in the occupied city of Jerusalem. In this regard, Euro-Med Monitor called on the Special Rapporteur on Freedom of Religion to take action and conduct fact-finding visits to Jerusalem in order to identify violations of the right to freedom of worship.

With regard to Yemen, in a joint statement made by Euro-Med Monitor and ACI, the Council is urged to deal sincerely with the ongoing violations of various parties in Yemen and to accelerate an independent international investigation into violations, whether committed by the Houthis or by the Saudi-led coalition forces. The two organizations further urged the Security Council to submit the file on Yemen to the International Criminal Court.

In a side event on violations of freedom of religion and belief in the Middle East, the Euro-Med Monitor addressed Israel's violations of Muslim and Christian places of worship in Jerusalem and stressed the need for religious sites to remain entirely isolated from any political influence. Since the beginning of the Gulf crisis, the restrictive measures taken by Saudi Arabia and placed on the travel of Qatari nationals to its territories constitutes an unreasonable restriction on freedom of movement for Qataris, especially those wishing to perform Hajj, a Euro-Med Monitor researcher pointed out.

Euro-Med Monitor also referred to violations against religious minorities in Iraq, condemning discrimination against them. Such violations included the imposing of restrictions on employment, access to public services and participation in political and other forums.

As for the suppression of civil society activists in Bahrain, the Euro-Med Monitor called on the Bahraini government to fulfill its obligations under the international treaties it has signed and ratified, such as the International Covenant on Civil and Political Rights, in particular the provisions of the Covenant on freedom of expression and the press, a fair trial for prisoners, as well as a complete halt of the detention of activists.

Euro-Mediterranean Human Rights Monitor called on the Council to exert a more genuine effort to protect civilians and to spare them from restrictions hardened by political differences. The Council's failure to form a committee to investigate violations in Yemen as well as its failure to send the Special Rapporteur on Freedom of Religion or Belief to pursue additional investigations on the above stated ongoing violations in the Middle East must be resolved in pursuance of conciliation.