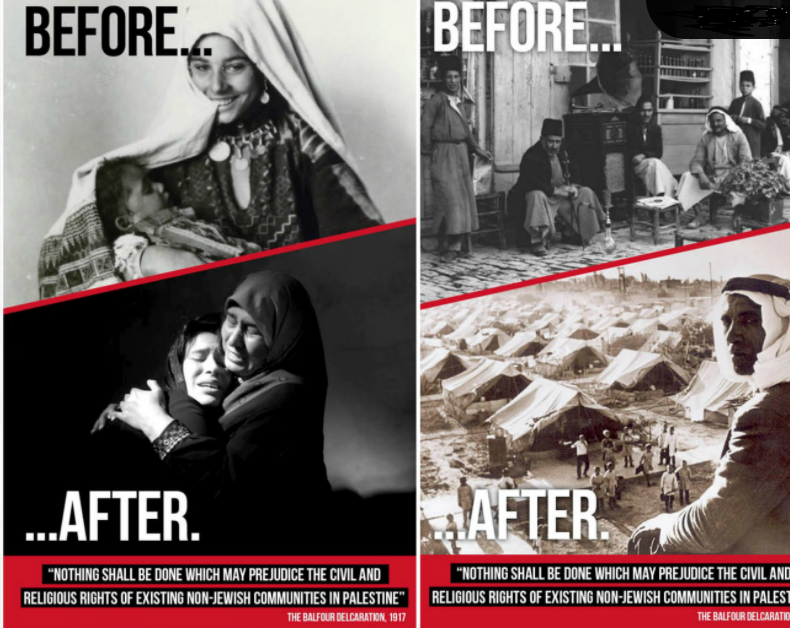 London- The Euro-Mediterranean Human Rights Monitor expresses concern over Transport for London’s (TFL) ban of ads objecting the 1917 Balfour Declaration, when the British government to establish a Jewish national home in Palestine. The Palestinian campaign demanded an apology from the British government for its foreign minister's declaration to build a Jewish homeland 100 years ago in Palestine.

The Geneva-based Euro-Med Monitor considers the banning of ads a hideous violation of freedom of expression that only reflects the impact of politics on such a basic right in the United Kingdom.

The advertising campaign titled "Make It Right," was commissioned by the Palestine Mission to the UK. In a series of events to mark the100th anniversary of the Balfour Declaration, organizers displayed adverts at underground stations and on buses. Posters included contrasting images of Palestinian life before and after 1948 (since the establishment of Israel) and how the Israeli occupation of the Palestinian Territories, displacement and massacres were committed during that period and affected the peace, prosperity and safety of the Palestinians.

TFL banned the adverts, claiming they “Did not comply fully with our guidelines," and that they "Included images and messages that is a matter of public controversy and sensitivity," a spokesman for TFL said.

The authorities had reportedly removed the ads that had been published, without notifying the concerned ads agency. After a long delay, the authorities informed the concerned parties that the campaign will not be approved. These practices coincide with protests demanding the United Kingdom, which refused to apologize for the Balfour Declaration, to promote Palestinian rights and recognize the injustice and continuing consequences of its declaration on the Palestinian people.

Commenting on the decision of the British government, Ihsan Adel, the Euro-Med Monitor's legal adviser said, “It is a clear indication of Britain's continuing bias towards the Israeli occupation and colonialism and its refusal to work for the right of more than 11 million Palestinians in the world, even though the United Nations recognized their right to self-determination and statehood.”

“Instead of Britain’s fulfilling its legal and political responsibilities by standing by the Palestinian people and by correcting its historical mistake, by stopping to give the green light to Israel to continue its practices, rejected by the United Nations, it supports the immunity of the occupation forces, and support its project, as underlined by the Balfour Declaration,” added Adel.

The Euro-Mediterranean Human Rights Monitor hereby calls on the British authorities to respect freedom of opinion and expression without harassment and restrictions, and to refrain from choosing political considerations and alliances over the right of the British people to have open space for discussion.

The Euro-Med Monitor also calls on the British government, headed by Theresa May, to adopt a balanced policy on the Palestinian issue that goes in compliance with international law, the UN Charter and the right to self-determination.