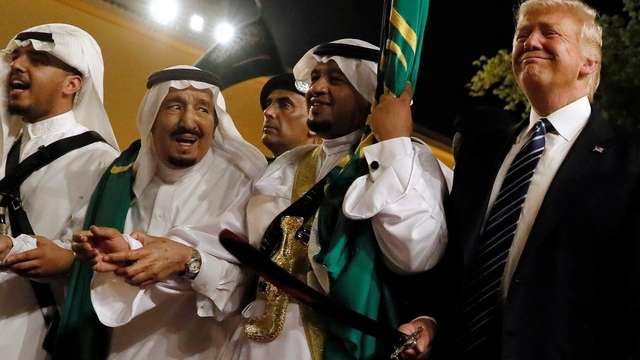 Geneva- 25 October 2017, The Euro-Med Monitor for Human Rights Monitor expresses its concern and alarm that Donald Trump, the United States President’s visit to Saudi Arabia gave the green light and brought about changes in the Kingdom that led to sever ties with Qatar following the US-Muslim Summit in Saudi Arabia.

Stephen K. Bannon, President Donald Trump’s former chief strategist, announced on Monday during a speech he gave at a think tank event in Washington that Trump’s summit with Arab leaders in Riyadh in May set in motion the regional escalation against Qatar.

The Euro-Med Monitor is extremely concerned due to such reports suggesting the US’s involvement in such a move that resulted in the violations of human rights of Qatari nationals, including families, students and professionals. Such a move contradicts the US’s commitment towards human rights and protecting the civilians.

The Gulf crisis, which resulted in severing ties with Qatar, including from the land, sea and air, has resulted in dividing families, preventing students from joining universities, and kicking Qatari nationals outside Saudi Arabia and UAE, as well as causing harm to Saudi and UAE nationals, thus putting their investment and interests at stake.

“If such a move proved to be valid, it is worrying and has to be stopped. The US should not take any part in the ongoing crisis, which entails human rights violations against Qatari civilians in many different ways,” said Sandra Owen, the Euro-Med Monitor Spokesperson.

“Decision by Saudi Arabia, United Arab Emirates and Bahrain to sever ties with Qatar will deeply and negatively affect residents in all of these countries, including their access to education, right to property ownership and freedom of expression,” the Euro-Mediterranean Human Rights Monitor added.

The Euro-Med Monitor calls on all parties involved in the crisis, especially the United States, to act in a reasonable manner, to stop the ongoing human rights violations resulting from the ongoing crisis.