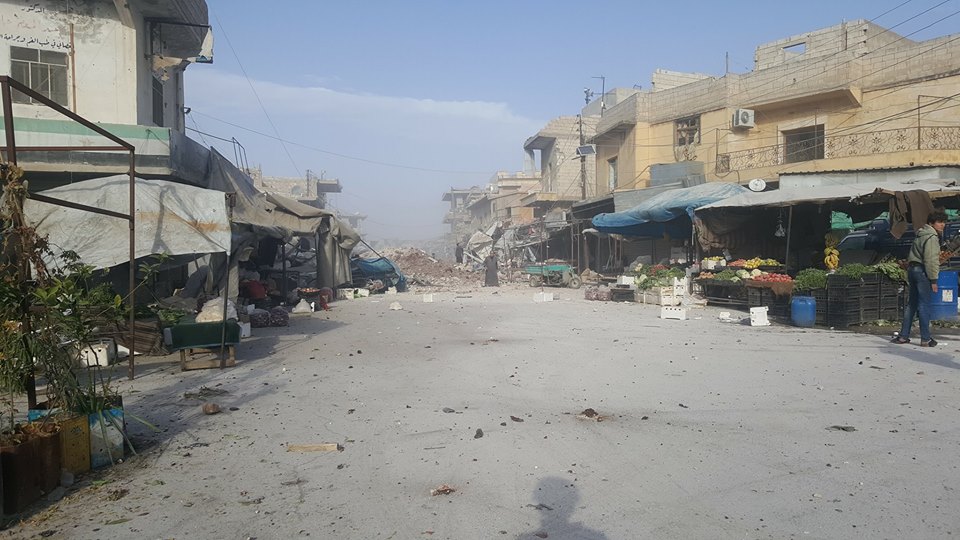 Geneva- The Euro-Mediterranean Human Rights Monitor calls  on the international community to end the silence towards Syria and take a decisive stand after dozens of civilians have been killed and wounded by the bombing of warplanes - believed to be Russian - on a popular market in the city of Atareb in the western province of Aleppo.

The attacking aircraft carried out three raids that left dozens of dead and wounded vendors and civilians who were pulled out of the rubble of shops and destroyed houses." What happened was a massacre and a terrible war crime," says Euro-Med Monitor .

In the aftermath of the incident, more than 50 people were killed and dozens injured, while other local sources reported that over 62 people were killed. More than 30 civilians are still trapped under the rubble in the market, which has been completely devastated. Civil defense crews are retrieving bodies of the dead and wounded from the scene.

The Atareb market is one of the largest commercial markets in the western countryside of Aleppo. Though more than 500 civilians come shopping every day to this market, it didn't stop warplanes from launching their rockets directly at unarmed civilians.

The Euro-Med Monitor points out that the massacres against civilians in Syria are continuing despite the agreements of cease-fire, which is supposed to include Atareb and the western Aleppo countryside under the agreement of Astana. Despite this, 39 massacres have taken place by various parties to the conflict in Syria during last month alone.

Euro-Med Monitor's legal adviser, Ihsan Adel assured that what happened in the Atareb market amounts to war crimes under the Rome Statute of the International Criminal Court.

"It is time for the international community to act, and the Member States of the United Nations General Assembly must pressure the Security Council to take a real role in stopping the Syrian conflict and bypassing the veto, and if the Security Council fails to do that, Member states must implement their previous "Uniting for Peace" resolution.

The Euro-Med Monitor calls on the international community and the Security Council particularly to take concrete measures to stop the ongoing series of massacres in Syria by the parties to the conflict and combat the widespread impunity in Syria.

The Geneva-based Human Rights Monitor also calls for the activation of the judicial investigation of individuals suspected of war crimes and crimes against humanity and to refer violations in Syria to the International Criminal Court as to investigate those responsible for crimes committed in the country and hold them accountable.