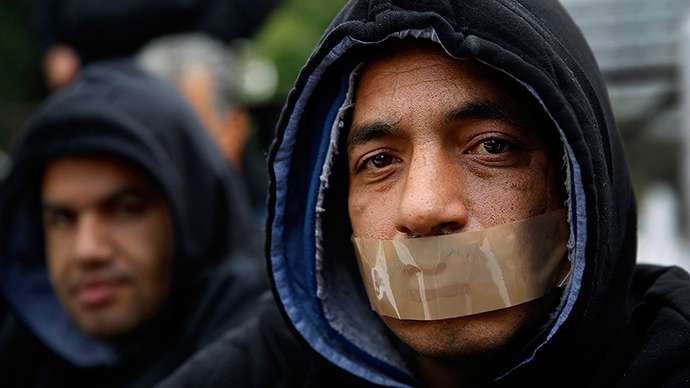 Geneva– The German authority policies against refugees in Greece are overwhelming and frustrating to those seeking refuge, warns the Euro-Mediterranean Human Rights Monitor. These policies have been seriously impeding reunification of refugees with their families in Germany, with measures unjustifiably hardly proceeding. Families of refugees are now standing before the Greek parliament building in Athens, declaring an open hunger strike in protest of this state of inaction.

Asylum seekers’ lives in Greece and its islands have already come to a critical point, with Germany denying their rights, and hardly doing anything to reunite them with their families, the Geneva-based Euro-Med Monitor says, noting that they have been waiting for this reunion for a year now.

With the Balkan countries closing borders, the number of refugees and migrants stranded in Greece has reached about 60,000, mostly from Syria, Iraq and Afghanistan. They have been living in camps and lacking their most basic needs, Euro-Med Monitor points out, calling on the European Union to implement the Third Dublin Convention, which grants refugees the right to move and resettle with their families.

The situation in the Greek Lesbos and Chios islands is seriously critical, especially following a new wave of migrants from Turkey added to the already overcrowded refugee camps, in addition to the delay in reunions proceedings by the German authorities. With refugee camps lacking basic living conditions such as electricity, heating and food, refugees cannot survive in these camps, especially the elderly, children and pregnant women.

More than 25,000 refugees have migrated through unsafe rubber boats from the Turkish Aegean Sea to the Greek islands this year, a third of which were children, says Euro-Med Monitor , noting that over 9,300 requests for reunion were submitted this year. Only 5,000 have been approved.

Over 4,000 refugees and migrants in Greece live under the same conditions, separated from their families, and reunification dates unclear.

Euro-Med Monitor further warns that the refusal of most EU countries to promote the integration of refugees within their communities through human rights work programs is deeply concerning.

“The European Union and the Greek government must work to ensure a safe and legal route for refugees fleeing conflict and persecution in Syria. Both of them should provide refugees with the necessary protection through the resettlement program as the decisive tool,” says Ihsan Adel, Euro-Med Monitor’s refugee adviser, calling on the German authorities to fulfil their promise and accelerate the process of transporting refugees.

Euro-Mediterranean Human Rights Monitor calls on the European Union to abide by the provisions of the Dublin Regulations and the 1951 Refugee Convention, to expedite family reunification and to work on sharing the burden of refugees to EU countries as agreed upon last year, which is only partially implemented until now. Greece, should improve the standards of living within refugee camps and encourage the support of refugees as best as possible.