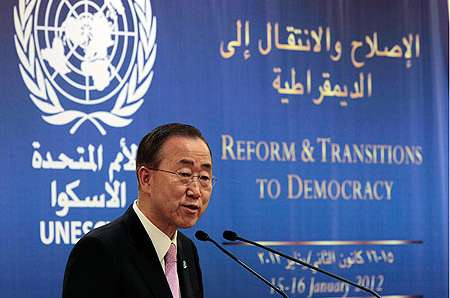 UN chief Ban Ki-moon on Sunday called for an end to Israeli "occupation" in the Arab world, saying the illegal building of settlements worked against a two-state solution.

"The Israeli occupation of Arab and Palestinian territories must end. So must violence against civilians," Ban said in a keynote address at a conference in Beirut on democracy in the Arab world.

"Settlements, new and old, are illegal. They work against the emergence of a viable Palestinian state," said the UN secretary general.

Ban, who arrived in Beirut on Friday, was speaking at a conference entitled "Reform and Transitions to Democracy" organized by the United Nations Economic and Social Commission for Western Asia (ESCWA).

The two-day conference brings together a slew of dignitaries from countries that suffered under dictatorships. Among the speakers are Egyptian presidential hopeful and former Arab League chief Amr Mussa and Turkish Foreign Minister Ahmet Davutoglu, whose country has emerged as a key regional player in the Middle East.