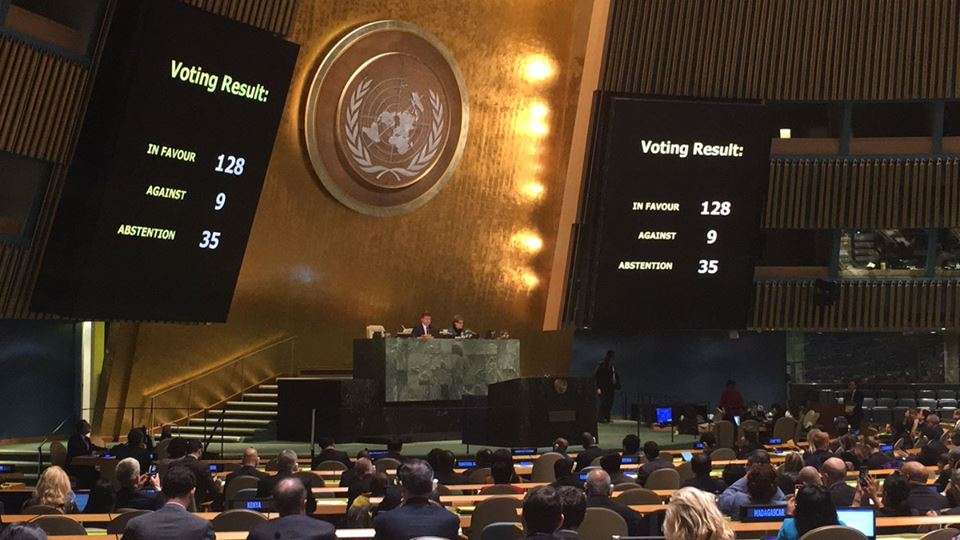 Geneva - The UN General Assembly’s decision on Thursday rejecting any change in the status of Jerusalem as an occupied city is a sign of courage and commitment despite campaigns of intimidation and extortion by the United States of America and Israel, says the Euro-Mediterranean Human Rights Monitor.

Adopting the resolution “is a simple victory for the rights of the Palestinians, but the international community should translate this international will and isolate those countries that incite violations and rob the rights of others,” says Sandra Owen, Euro-Med Monitor’s spokeswoman.

“On the other hand, we regret to learn of the positions of some countries that do not conform to the values ​​of international justice,” said Owen, adding, “and we deplore those campaigns of intimidation and extortion by the United States and Israel.

Following the Security Council’s failure to decide on the status of Jerusalem last Monday, a draft resolution was submitted by Yemen and Turkey to be voted on, and which was put into vote at an emergency special session of the United Nations General Assembly.

The emergency meeting was held in accordance with Resolution 377 of 1950, known as the Union for Peace. The General Assembly has held only 10 such meetings throughout its history.

The vote on the draft resolution was supported by 128 countries, rejecting any changes to the status of Jerusalem and demanding respect of previous UN resolutions on Jerusalem. Meanwhile, 9 countries have objected the resolution, while 35 others have abstained from voting.

Each member state in the General Assembly is represented by one vote. For a resolution to be made, a two-third majority of the members present need to vote in favor of such important matters, such as those relating to peace and security, the admission of new members and the issuance of recommendations for the settlement of any situation that may disturb the friendly relations between countries. Decisions on other matters can be made by a simple majority of the members present.

The General Assembly may also take action in cases of threat or breach of peace or hostilities, if the Security Council does not take action because of the rejection of a permanent member. In such cases, the General Assembly - in accordance with its provisions and resolution 377, “Uniting for peace” of November 3rd, 1950 - has the right to consider the matter immediately and to recommend to its members collective measures for the maintenance or restoration of international peace and security.

The resolution states that “in any cases where the Security Council, because of a lack of unanimity amongst its five permanent members, fails to act as required to maintain international peace and security, the General Assembly shall consider the matter immediately and may issue any recommendations it deems necessary in order to restore international peace and security.”