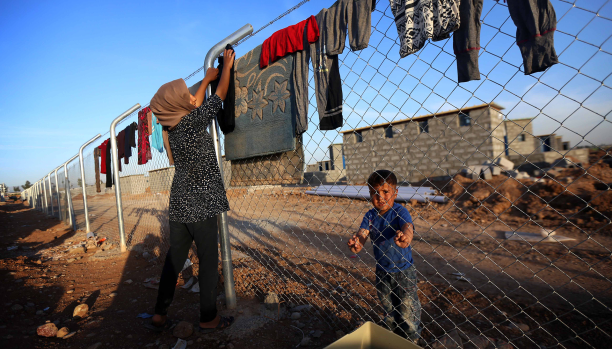 Geneva- A new law by the Iraqi government that targets Palestinian nationals will effectively abolish rights given to Palestinian refugees, causing them to be treated as foreigners rather than nationals, is a serious, unprecedented violation against those who have been living in the country for more than 50 years since the start of the Israeli occupation. The Euro-Mediterranean Human Rights Monitor condemns the adoption of this law and calls for its immediate reversal.

Iraqi President Fuad Masum had ratified legislation No. 76 of 2017, revoking the rights and privileges granted to Palestinians in Iraq under Law No. 202 issued under Saddam Hussein's era, which granted Palestinians most of the same rights and obligations as Iraqis.

The new law deprives Palestinians living in Iraq of their right to free education, healthcare and to travel documents, and denies them work in state institutions. By placing them under the category of foreigners, this decision puts a major roadblock before Palestinians' accessibility to work in private institutions and businesses.

The Euro-Med Monitor  confirms that the Iraqi government's decision has been issued and took effect after it was published in the Iraqi Official Gazette No. 4466.

Law No. 202, which was canceled under the new provision, was a manifestation of refugee rights guaranteed by international conventions, including refugee rights to work, retirement, free housing, tax exemption, health and education and travel documents.

According to the Euro-Med Monitor, the number of Palestinians who lived in Iraq before the US invasion in 2003 was about 40,000, most of whom took refuge after the start of the Israeli occupation in 1948, and were stationed in Basra, Mosul and Baghdad. Back then, Palestinians enjoyed the same rights and privileges as Iraqi citizens.

The estimated number of Palestinians living in Iraq is currently about 7 thousand people. The Palestinian population fell drastically after the US occupation of Iraq, violence from armed Shiite militias, and the systematic displacement and detention of thousands of them after 2006, on the pretext that they were supporters of former President Saddam Hussein.

The majority of Palestinian refugees in Iraq reside in camps and old houses, where they live in extremely harsh conditions with almost no basic services for life.

The pace of restrictions on Palestinian refugees began under the government of Ibrahim Jaafari, and increased under the government of Nur Al-Maliki. Through imposing procedures related to legal residence and demanding their renewal every three months, amid complications and procrastination, the Iraqi authorities detained many refugees under the pretext of illegal residence in the country.

The Euro-Med Monitor stresses that the new resolution has serious repercussions for the Palestinians, including children and women, as the poorest Palestinian communities in the world live in Iraq since the occupation in 2003.

"Instead of protecting the Palestinian refugees from daily violations and improving their living and humanitarian conditions, the Iraqi government is making decisions that will have a catastrophic impact on the lives of these refugees. It is a shame to which an end should put," said Ihsan Adel, Euro-Med Monitor's legal adviser.

"The recurrent harassment and restrictions imposed on Palestinian refugees in recent years have forced most of them to resort again to other countries such as Canada, Chile, Brazil and other European countries. Due to these violations, only about 7,000 out of 40,000 Palestinian refugees are now residing in Iraq," said Adel.

Therefore, the Euro-Med Monitor calls on the Iraqi government to reconsider and withdraw these unjust decisions against thousands of Palestinian refugees who, through no fault of their own, find themselves caught up in humanitarian crises. The Euro-Med Monitor also calls on the international community to pressure the Iraqi government to reverse its issuance of similar decisions that carry dire consequences for the rights of the Palestinian community residing in Iraq.