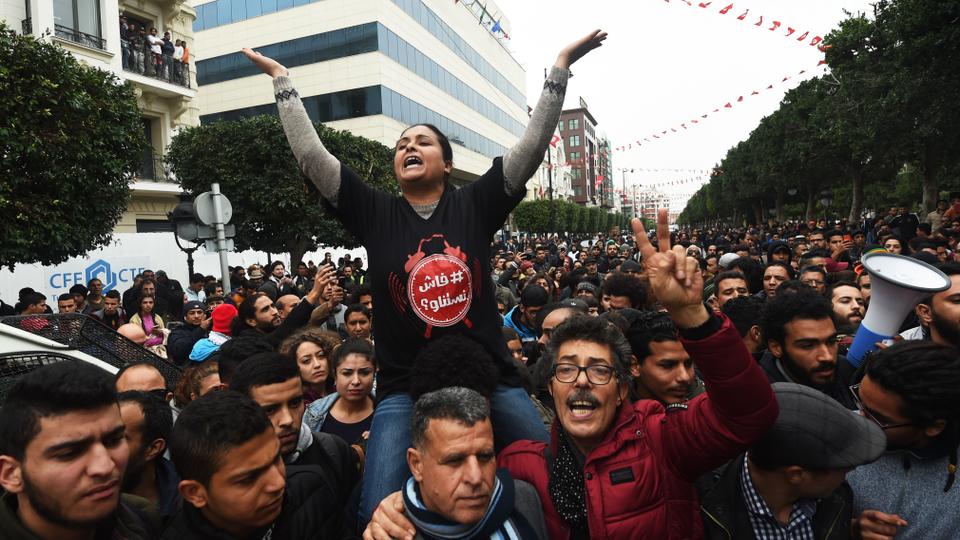 Euro-Med Monitor teams documented Tunisian security services' hunt for activists who issued statements or wrote slogans calling for protests against high prices in Tunisia, including the arrest of several demonstrators in some Tunisian cities. These practices constitute a clear violation of the right of demonstrators to peaceful assembly, as guaranteed by both international conventions and the Tunisian constitution.

The Tunisian authorities arrested several members of a local campaign, called "Fash Nestaou?" (what are we waiting for?) launched against the government's decision to raise prices. According to a statement by the campaign organizers, the Tunisian authorities arrested activists of the "Fash Nestaou" campaign on the 6th and 7th of January, especially in the cities of Sfax, Sousse, Ben Arous and Bizerte.

The Tunisian security forces arrested four activists in the city of Sousse on January 7, and nine others in Ben Arous and two activists in Bizerte state, documented the Euro-Med Monitor .

While detained activists were charged with spray-painting graffiti, damaging public and private property and inciting riots, Euro-Med Monitor is concerned that these arrests were carried out arbitrarily in order to suppress the protests. There was evidence that the authorities arrested peaceful activists, most of whom were released later, which may point to the fabrication of charges on which arrests were made.

Five people were arrested over spraying slogans on the doors of Gafsa Governorate Headquarters. Slogans criticized the Tunisian President and expressed rejection to the prices rise decision. Later, the detainees were released after committing to not participate in protests.

Moreover, Euro-Med Monitor has received reports of Tunisian forces of the Ministry of Interior use of violence in dispersing demonstrators in some areas. In a video circulated on social media outlets, Tunisian security forces appeared to be using batons and gas canisters against those who protested in Bourguiba Street in central Tunis near the Ministry of Interior, demanding the cancellation of the prices rise decision and the release of their fellow activists.

The Tunisian parliament adopted the budget of 2018, under which a sharp increase, as described by activists, of the prices of basic commodities such as medicine, fuel and some food items, took place, with a possible expectation to increase the prices of cars and houses too. On the other hand, the Tunisian government says the prices increase decision does not include subsidized basic foodstuffs such as bread and milk.

The Tunisian General Union of Labor, the largest trade union in Tunisia, issued a statement stressing that the measures taken by the government may increase the rate of inflation and deepen social inequality. Tunisia's annual inflation rate reached 6.3% last November with the food prices index increasing by 10.3%.

Euro-Med Monitor points out the Tunisian constitution guarantees the right to peaceful assembly and freedom of opinion and expression in Article 37, in addition to respecting the rules of international human rights law, in particular the International Covenant on Civil and Political Rights, to which Tunisia is a party. Thus, the Euro-Med Monitor calls on the Tunisian authorities to immediately release the detained protesters and respect the right of citizens to peacefully expressing their views without prosecution.