On the sidelines of the UPR, Euro-Med Monitor and ACI hold side event on human rights situation in oPt and UAE 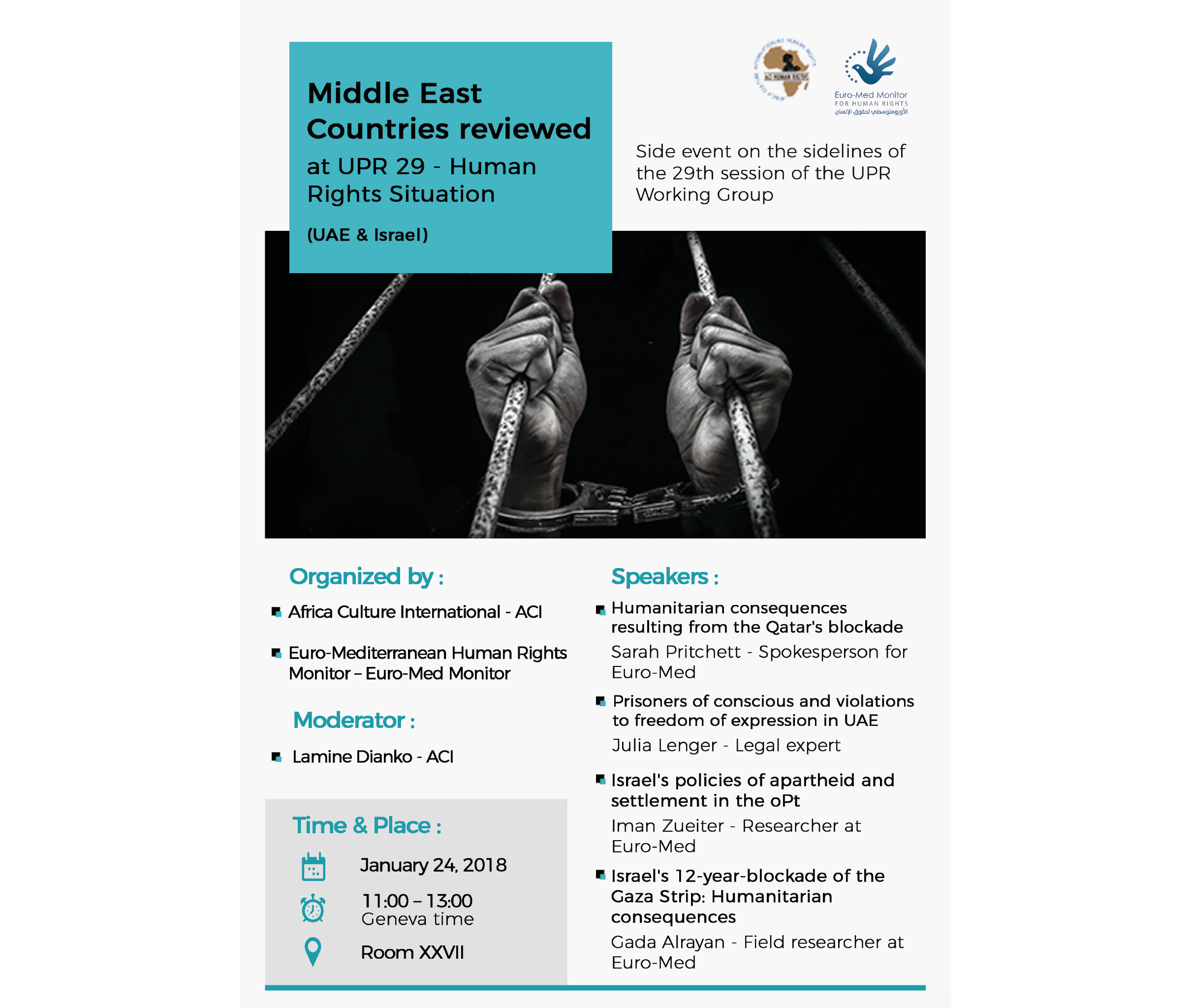 Geneva - A side event on the sidelines of the 29th session of the Universal Periodic Review (UPR) will be organized this week at the UN Human Rights Council by the Euro-Mediterranean Human Rights Monitor. The UPR session will review the human rights situation in two Middle East countries, the United Arab Emirates and Israel.

In partnership with Africa Culture International (ACI), Euro-Med Monitor will organize the side event next Wednesday, 24 January 2018, to discuss the human rights situation in the two countries, as both fall within Euro-Med’s scope of work in the Middle East and North Africa region.

The discussion will focus on the humanitarian consequences of the Israeli blockade on Gaza, in addition to highlighting policies of apartheid and illegal settlement in the West Bank, said the INGO. The discussion will also cover the Gulf crisis and the implications of the UAE’s collective punishment of Qatar as part of the siege imposed by several countries. The blockade’s negative impact on the civil and social rights of the population in Qatar will be highlighted, in addition to the violations of the right to freedom of expression in the UAE.

This intended side event is part of Euro-Med Monitor’s work in cooperation with various UN bodies— including the UNHRC- to exert more pressure on human rights perpetrators and to discuss ways to hold them accountable, ending their impunity. The Israeli blockade on Gaza has now completed 12 years, with the humanitarian situation deteriorating to unprecedented levels, also with Israel's escalation of Apartheid practices in the Palestinian territories -- particularly after Donald Trump's recognition of Jerusalem as the capital of Israel.

The side event will also highlight the ongoing human rights violation in the United Arab Emirates; especially of prisoners of conscience and their families. It will further cover the implications of the isolation policy on civilians and their rights, in addition to the negative impact of the Qatar blockade on peace and security in the region. The Universal Periodic Review (UPR) is one of the key activities of the United Nations Human Rights Council, under resolution 60/251 of the United Nations General Assembly. It reviews the human rights performance of all UN Member States, each member state is reviewed every four years; 48 member state every year. Such review aims to improve and promote human rights conditions in all member states.