On the sidelines of the Universal Periodic Review: Euro-Med Monitor holds side event on human rights in Israel and UAE 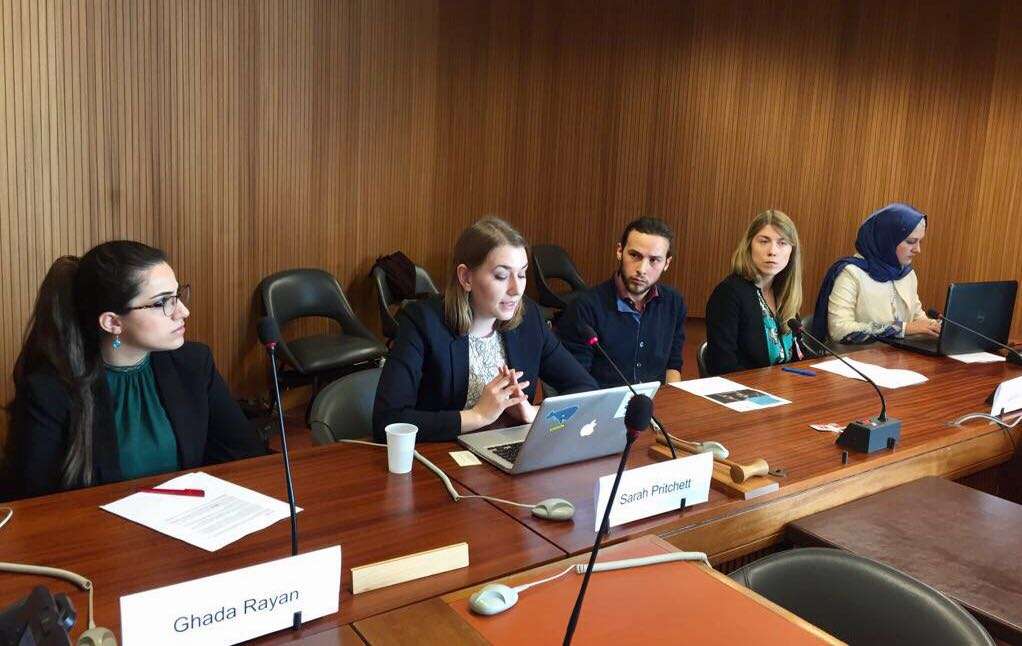 Geneva- On the sidelines of the 29th session of the Universal Periodic Review (UPR), Euro-Med Monitor Human Rights Monitor held a side event on Wednesday to discuss the human rights situation in the UAE and Israel at the UN Office in Geneva.

During the UPR, human rights activists and workers of international organizations addressed four main domains, including the humanitarian impact of the Israeli blockade on the Gaza Strip, the policy of apartheid and Israeli settlement in the West Bank, the consequences of the Gulf crisis and the UAE's collective punishment against Qatar, seriously affecting civilians, and the UAE's violations of the right to freedom of expression.

Sarah Pritchett, Euro-Med Monitor's spokeswoman, criticized in her statement the humanitarian consequences of the Gulf crisis, the measures taken by the the UAE, including ordering Qatari citizens who were residents in the the UAE to depart as well as their citizens in Qatar to return, leaving almost 6,500 families separated and scattered.

“This crisis has resulted in the separation of parents from their children, husbands from their wives, and sick and old people from their parents and caretakers, violating the right of families to privacy and protection from arbitrary interference as well as freedom of movement,” Pritchett explained.

Stressing the UAE's full responsibility for its actions that put the lives of patients at real and serious risk, Pritchett highlighted that several Qatari patients were deprived from surgery in the UAE and medical treatment.

On the issue of prisoners of conscience and the UAE's violations of the right to freedom of expression, Euro-Med's legal expert, Julia Lenger, commented, “Despite its accession to the UN Convention against torture, the UAE is still using torture as a means against detainees in its prisons.”

In addition, the UAE has not yet submitted its initial report to the Committee against Torture, which was supposed to be delivered in August 2013. This underlines the UAE's failure to fulfill its obligation and raises serious doubts about the government's commitment to eliminate such practices, in the light of an increase in torture complaints by some detainees, who confirmed that they had been beaten with plastic pipes and electric shocks, were placed in solitary confinement and threatened to be murdered and raped.

Euro-Med Monitor's legal researcher, Ghada El-Rayyan, confirmed that the 12-year-old siege imposed on the Gaza Strip, following the Palestinian legislative elections in 2006, the Israeli authorities severely restricted the movement of people and goods in and out of the Strip and allowed only limited quantities of food or fuel in.

The siege prevented many patients from receiving appropriate treatment abroad, as well as hundreds of students from traveling abroad to study or participate in education exchange or cultural programs.

The Israeli siege over the last 12 years has led to the collapse of the economic system in the Gaza Strip, where 80% of its population is dependent on relief and international aid provided by UNRWA and other international organizations and 72% of families are food insecure. Most companies have been unable to invest in productive goods, which led to a sharp decline in labor productivity compared to that of the West Bank.

Also, the siege had left a negative impact on the fishing and agriculture sectors, where fishermen are allowed to sail only at 3-6 nautical miles. If they do not comply with the permitted fishing zone, they are subject to arrest or shooting.

Iman Zuaiter, Euro-Med Monitor's researcher, discussed the discriminatory policies of the Israeli authorities in the Palestinian territories, the daily suffering of Palestinians due to Israeli racist practices, including its based-on-race laws when compared with the services provided to more than 640,000 settlers living in about 196 settlements in the West Bank and East Jerusalem.

Zuaiter explained that the occupied Palestinian territories have two legal systems: a civil legal system applied to Israeli settlers and a military one, in the form of military orders issued by IDF commanders, which applies to 4.7 million Palestinians in the Gaza Strip and the West Bank.

She explained that applying such a system may expose the Palestinians to prison even before they are informed of the charge against them, which keeps them vulnerable to repression and denial of rights enjoyed by Israeli settlers living in the same region. In addition, Palestinians are subjected to racial discrimination even in prisons, where they are classified as "security prisoners", depriving them of the many rights enjoyed by Israeli prisoners facing the same charges.

"These practices only make Israel an apartheid state," Zuaiter added.

By the end of the side event, Euro-Med Monitor called on the the UAE authorities to respect the international law, stop arbitrary measures against civilians in Qatar, stop torture in prisons and release prisoners of conscience.

Also, Euro-Med Monitor called on the international community to act urgently to pressure Israel to end its illegal blockade of the Gaza Strip and to hold it accountable for its human rights violations and systematic discrimination in the Palestinian territories.

The Universal Periodic Review is one of the main activities of the United Nations Human Rights Council under resolution 60/251 of the United Nations General Assembly. Through the UPR, the human rights situation is reviewed in all UN Member States with a vision to improving the human rights situation in those States in order to push them fulfill their obligations.