Facts about the Interrogation of the Palestinian Minor 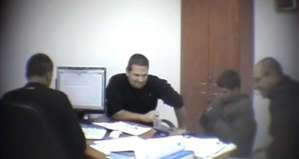 Euro-Med Monitor for Human Rights commented on a number of facts about the violations committed by the Israeli authorities against Palestinian “minors” being detained and extracting confessions under pressure, in Israeli police stations

The Euro-Med Monitor added that the investigations with the minors by the Israeli authorities come most often when the minors were arrested for participation in peaceful marches against the practices of the occupation and the separation wall, which was condemned by the International Court of Justice in Lahai in 2004.

Also, the Euro-Med Monitor pointed that these arbitrary arrests violate Article 9 of the Universal Declaration of Human Rights, which states that "No one shall be subjected to arbitrary arrest, detention or exile". In addition, this arrest is violating the Convention on the Rights of the Child, in Article No. (37 / b), which states that "no child is deprived of his liberty unlawfully or arbitrarily.., do not resort to his arrest or imprisonment, according to the law only as a last resort and for the shortest period of time."

In addition the Euro-Med Monitor clarified in its announcement that arresting Palestinian children for participating in peaceful marches is a violation of the rights of children to express their opinions according to Articles 12 / 1 and 13 / 1 of the Convention on the Rights of the Child.

In the same context, the Euro-Med Monitor documented a number of testimonies from Palestinian minors who have been tortured during interrogation, by employing methods of psychological pressure, scolding, deprivation of sleep, and the reluctance to call the lawyers, which are forms of "harm, abuse and violence". Such practices are considered as violation of the article ( 19 / 1) of the Convention on the Rights of the Child, thus those who are using such methods must be criminalized and prosecuted in the court of law.

On the other hand, it explained that the Article (37) of the Convention on the Right of the Child stated  that all parties shall ensure that "Every child deprived of liberty shall be treated with humanity and respect for the inherent dignity of the human person, and in a manner which takes into account the needs of persons of his or her age …" Yet, it said that the need for sleep and comfort are from the basic needs of the child, which has been violated by the Israeli authorities in many cases and was clear in the leaked video.

The violations against Palestinian minors in Israeli interrogation centers exceed that mal treatment to include the deprivation of their right to further their education and their right to seek legal aid. The Israeli Authorities, in all cases, start the investigation procedures immediately after the arrest of the child, without waiting for the presence of a counselor.