Middle East and North Africa: Protest and repression set to continue in 2012 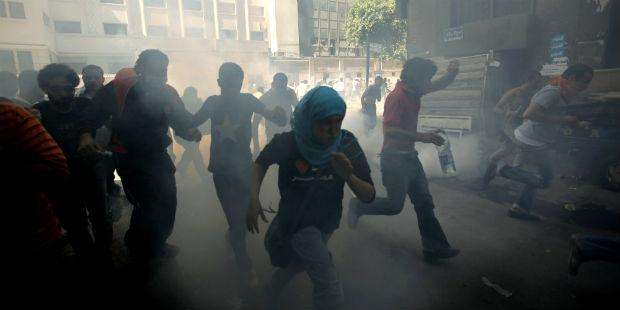 Repression and state violence is likely to continue to plague the Middle East and North Africa in 2012 unless governments in the region and international powers wake up to the scale of the changes being demanded of them, Amnesty International warned today in a new report into the dramatic events of the last year.

In the 80-page Year of Rebellion: State of Human Rights in the Middle East and North Africa, the organization describes how governments across the region were willing in 2011 to deploy extreme violence in an attempt to resist unprecedented calls for fundamental reform.

But Amnesty International said that the region’s protest movements appeared to show few signs of abandoning their ambitious goals or accepting piecemeal reforms.

“With few exceptions, governments have failed to recognize that everything has changed,” said Philip Luther, Amnesty International’s interim Middle East and North Africa Director. “The protest movements across the region, led in many cases by young people and with women playing central roles, have proved astonishingly resilient in the face of sometimes staggering repression.”

“They have shown that they will not be fooled by reforms that make little difference to the way they are treated by the police and security forces. They want concrete changes to the way they are governed and for those responsible for past crimes to be held to account.”

“But persistent attempts by states to offer cosmetic changes, to push back against gains made by protesters or to simply brutalize their populations into submission betray the fact that for many governments, regime survival remains their aim.”

Despite great optimism in North Africa at the toppling of long-standing rulers in Tunisia, Egypt and Libya, Amnesty International said that these gains had not yet been cemented by key institutional reforms to guarantee that the same kinds of abuses would not be repeated.

Egypt's military rulers, the Supreme Council of the Armed Forces (SCAF), pledged repeatedly to deliver on the demands of the “January 25 revolution” but Amnesty International found that they had in fact been responsible for a catalogue of abuses that was in some aspects worse than under Hosni Mubarak.

The army and security forces have violently suppressed protests, resulting in at least 84 deaths between October and December 2011. Torture in detention has continued while more civilians have been tried before military courts in one year than under 30 years of Mubarak’s rule. Women appear to have been targeted for humiliating treatment to try to deter them from protesting. In December the offices of a number of Egyptian and international NGOs were raided by security forces in an apparent attempt to silence critics of the authorities.

Amnesty International said it feared that 2012 could see further attempts by the military council to restrict the ability of Egyptians to protest and freely express their views.

The uprising in Tunisia brought significant improvements in human rights, but one year on many consider that the pace of change has been too slow, with families of the victims of the uprising still awaiting justice.

Amnesty International said that that in 2012 it was critical that Tunisians seized the opportunity of drafting a new constitution to ensure that it guaranteed protection of human rights and equality under the law.

In Libya, there were significant questions about the ability of the new authorities to control the armed brigades that had helped oust the pro-Gaddafi forces and prevent them from replicating the patterns of abuse learnt under the old system.

Despite the National Transitional Council calling on its supporters to avoid revenge attacks, serious abuses by anti-Gaddafi forces have rarely been condemned. In November the UN stated that an estimated 7,000 detainees were being held in makeshift centres under the control of revolutionary brigades, with no prospect of a proper judicial process.

Elsewhere, Amnesty International said that governments remained grimly determined to cling onto power, in some cases at almost any cost in human lives and dignity.

The Syrian armed forces and intelligence services have been responsible for a pattern of killings and torture amounting to crimes against humanity, in a vain attempt to terrify protesters and opponents into silence and submission. By the end of the year there were over 200 cases of reported deaths in custody, over 40 times the recent average annual figure for Syria.

In Yemen the standoff over the Presidency caused further suffering for ordinary Yemenis. More than 200 people were killed in connection with protests while hundreds more died in armed clashes. Tens of thousands were displaced by the violence, causing a humanitarian crisis.

There were hopes in Bahrain that the November publication of an independent report by international experts on protest-related abuses might mark a fresh start for the country. At the end of the year the strength of the government’s commitment to implementing the commission's wide-ranging recommendations remained to be seen.

The Saudi Arabian government announced major spending packages in 2011, in what seemed to be an attempt to prevent protests spreading to the Kingdom. Despite that – and the drafting of a repressive anti-terror law – protests continued at the end of the year, in particular in the country’s eastern region.

In Iran, whose domestic policies remained largely out of the spotlight during 2011, the government continued to stifle dissent, tightening restrictions on freedom of information and specifically targeting journalists, bloggers, independent trade unionists and political activists.

Amnesty International said the response of international powers and regional bodies such as the African Union, Arab League and EU to developments in 2011 had been inconsistent, and had failed to grasp the depth of the challenge to entrenched repressive rule in the region.

Human rights were espoused as a reason in favour of a military intervention in Libya, but the Security Council, stymied by Russia and China in particular, had by the end of the year only issued a weak statement condemning the violence in Syria.

And while the Arab League acted quickly to suspend Libya from membership in February and later suspended Syria and sent a team of observers, it remained quiet when Saudi Arabian troops, acting under a Gulf Cooperation Council banner, backed the Bahraini government’s efforts to crush protests.

“Support from world powers for ordinary people in the region has been typically patchy,” said Philip Luther.
“But what has been striking about the last year has been that – with some exceptions – change has largely been achieved through the efforts of local people coming onto the streets, not the influence and involvement of foreign powers.”

“The refusal of ordinary people across the region to be deterred from their struggle for dignity and justice is what gives us hope for 2012.”