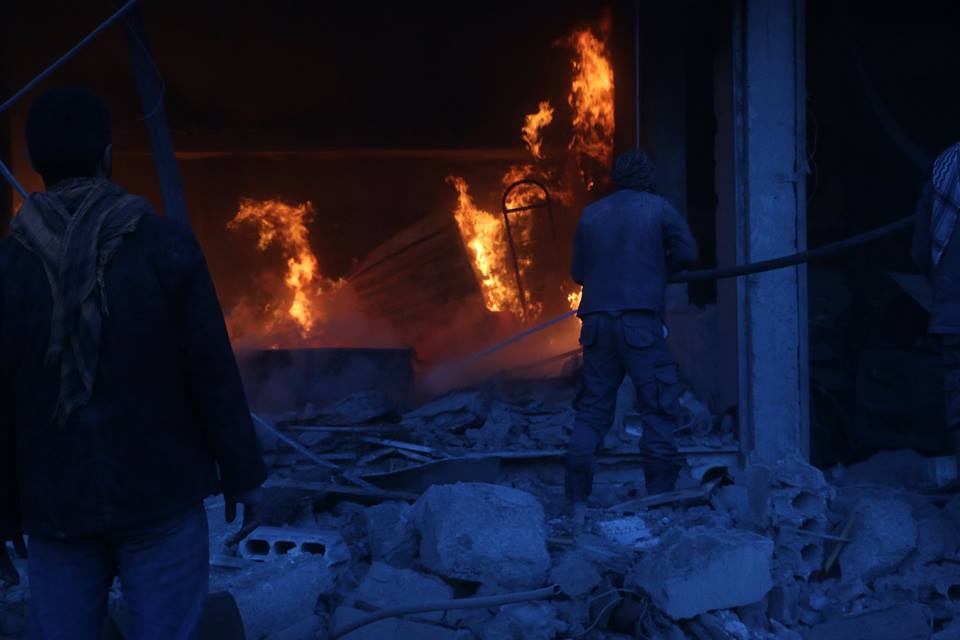 SN4HR and Euro-Med Monitor: The situation in East Ghouta requires a decisive resolution from the Security Council

Geneva- The massacres committed against unarmed civilians in the towns and villages of eastern Ghouta are horrific, says the Euro-Mediterranean Human Rights Monitor and the Syrian Network for Human Rights in a joint statement.

The airstrikes conducted violate the Security Council Resolution 2401 of 24 February this year calling for an immediate 30-day cessation of hostilities to facilitate humanitarian work and deliver necessary aid via all routes to the besieged and displaced civilians in the area.

In collaboration with the Russian forces, the Syrian army had committed dozens of massacres and extrajudicial killings since 24 February 2018 (the date of the resolution) until the evening of March 11, stated the two human rights organizations.

During the past 10 days, the Syrian forces have intensified the shelling and airstrikes on eastern Ghouta using incendiary weapons, chemical weapons, cluster munitions and at least 172 explosive barrels. These attacks are evidence to the significant rise in attacks when compared to pre-UNSC resolution, in a clear and explicit disregard to the Council and its resolutions.

The attacks also affected the vital centers in eastern Ghouta, stated the two organizations, who recorded at least “nine attacks.”

About 1,000 people need medical evacuation, including about 700 people who need urgent treatment, according to Tarik Jasarevic, WHO spokesman. But the blockade has made it impossible to transfer casualties. According to Jasarevic, only 29 patients and wounded have been evacuated by the Syrian Red Crescent from Syria’s eastern Ghouta for treatment since last December.

Karel van Oosterom, U.N. Security Council President and the UN's representative to the United Nations, expressed concern for the humanitarian situation in eastern Ghouta and reiterated calls for an immediate commitment to the ceasefire already in place. He also stated that the Security Council will hold a special closed-door meeting today, the 12th of March. The session will address the report on the implementation of the previous Security Council resolution on the supposed cessation of hostilities, written by the Secretary-General of the United Nations’, Antonio Guterres,

In a session held a week ago, the United Nations Human Rights Council called on the International Independent Investigation Commission on violations in Syria to conduct a special investigation of the crimes committed in eastern Ghouta during the past days to ensure accountability of those responsible for violations.

Reviewing his annual report at a Human Rights Council meeting in Geneva, Zeid bin Ra'ad, the United Nations High Commissioner for Human Rights, said that the indiscriminate and brutal attacks against civilians in the eastern Ghouta cannot be justified no matter what, dismissing the Syrian regime’s false claims that it took precautions to protect civilians as “ridiculous,” and stressing the need to take the matter to the International Criminal Court.

The Euro-Mediterranean Human Rights Monitor and the Syrian Network for Human Rights call on the Security Council - as it holds its closed meeting today on the implementation of the ceasefire resolution - to take decisive measures to ensure that the ceasefire is taking effect, with the fighting completely halted for medical evacuation and aid delivery in particular. The two groups further call on the Security Council to take measures to ensure that perpetrators of these massacres are brought to justice.