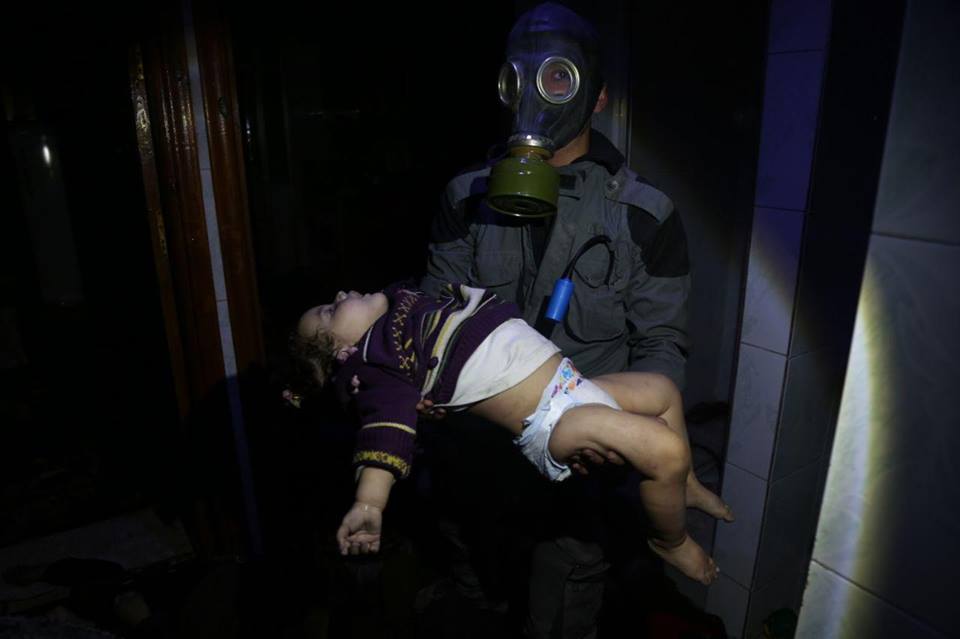 Geneva- The international community bears a fair share of the responsibility for the chemical attack on Syria’s Douma town, carried out by the Syrian-Russian forces, says the Euro-Mediterranean Human Rights Monitor.

The attack resulted in dozens of victims, including women and children, adds the human rights organization, stressing that, the international community has failed to put an end to the use of internationally banned weapons in Syria.

Chemical weapons have been used 215 times over the past seven years. However, Syria will chair the UN Disarmament Conference next month, which oversaw the negotiations on the Chemical Weapons Convention.

The city of Douma has been exposed since last Friday to chemical attacks - apparently with chlorine gas. One of these attacks occurred near the Saada Bakery, and the other hit the Martyrs Square in the Nu'man area, both claimed the lives of over 100 civilians and suffocated at least 1000 others, according to Euro-Med’s team. The use of such weapons means “intentionally directing attacks against the civilian population,” which may amount to a war crime and a crime against humanity.

The human rights organization said that 350 airstrikes have been carried out by the Syrian-Russian forces in the town of Douma during the past three days with missiles carrying incendiary, phosphorus and napalm substances, and explosive barrels with cluster bombs. Eyewitnesses confirmed to Euro-Med Monitor that each airstrike contained three barrels at once, and indiscriminately targeted both civilian and military sites.

The Civil Defense Forces could not reach the dead and wounded due to the intensity of the bombing in the city, which caused the destruction of entire neighborhoods, the killing of entire families, in addition to targeting the city's hospitals, ambulances and civil defense teams.

Since the beginning of the conflict in Syria, the Syrian regime resorted to the use of internationally banned chemical weapons against cities, residential neighborhoods and unarmed civilians about 215 times. These weapons have been used 33 times before the Security Council issued its 2118 Resolution, while the rest of attacks have been carried out after the resolution.

The increased use of chemical weapons following the resolution indicates the Syrian regime's disregard for international resolutions. This persistent policy of impunity enjoyed by the Syrian regime is also a result of Russia’s abuse of the veto in the Security Council.

In August 2013, Eastern Ghouta has already been subjected to one of the most severe attacks by the Syrian regime using chemical weapons, which claimed the lives of more than 1,400 civilians, mostly children and women. The Syrian regime also used chemical weapons in the past year, 2017, several times, most notably in rural Idlib’s town of Khan Shaykhun, killing more than 100 civilians, and injuring hundreds.

“Although the Syrian regime has repeatedly violated the [said] Security Council resolution, it has not been met with a proper response from the Council. Thanks to Russian vetoes, the Syrian regime still enjoys impunity to continue to commit serious violations said Euro-Med’s spokeswoman Sandra Owen. The silence of the international community and its reluctance to take firm steps against such attacks in Syria are indicative of complicity,” Owen added.

The attacks and displacement from Douma city to northern Syria have resulted in severe damage to operable hospitals and medical staff, in addition to severe shortages in food, medical equipment, medicines. The humanitarian situation in Douma city has only further worsened as a result. The lack of available treatment, especially first aid equipment, in light of the continued attacks and blockade of the city, speaks only of an imminent disaster.

The Euro-Mediterranean Human Rights Monitor calls on the international community to take full responsibility, to exert every effort to protect the civilian population in Syria against attacks, to open an urgent investigation and to hold the perpetrators accountable.

Euro-Med Monitor also calls on the Syrian-Russian forces and all Syrian armed groups to neutralize civilians, to abide by Security Council resolutions and to ensure respect for international laws and conventions, in particular the Geneva Conventions, in order to ensure the protection of civilians and to allow humanitarian access to those damaged all over Syria.