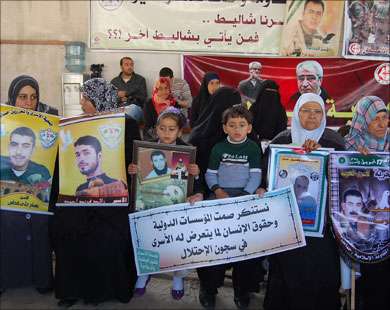 The Euro-Mediterranean Human Rights Monitor expressed its deep concern for the constant targeting of the Palestinian academicians and scholars and putting them in detention by the Israeli Authorities.

The Euro-Med Monitor reported a number of arrests among the Palestinian academicians, lecturers, and scholars at Palestinian universities by the Israeli authorities. These arrests were done on regular basis and without declaring any reasonable charges against the academicians, who are now in “Administrative Detention”, according to an order signed by the Israeli Territorial Military Governor.

"Based on the information gathered from the field survey team of the Observatory, the Israeli authorities arrested up to day 41 Palestinian lecturers and academicians, most of whom are being in “administrative detention”. A number of thee detainees are from the academic staff in An-Najah University, Nablus; such as, Mr. Youssef Abdel Haq and Omar Abdel Razek, professors of economics; Mr. Mohammed Ghazal, a professor of Civil Engineering; Mr. Amin Abu Wardeh, a professor of Political Sciences; and from Al-Quds Open University: Mr. Adnan Abu Tbana and Nayef Abu Saud…” and others according to the report.

In addition, the Euro-Med Monitor authenticated cases of extortion practiced against a number of academicians; such as manipulating them to cooperate with the Israeli intelligence in return for their release and threating them of deportation. The Israeli authorities even confiscated the scientific research done by the Palestinian academicians during the years of their administrative detention, as in the case of Professor Issam Al-Ashqar,  where the Israeli prison administration destroyed 7 theoretical research  Al-Ashqar prepared in the field of physics.

Miss Amany Al-Senwar, the executive and regional manager of the Euro-Med Monitor, stated that the Euro-Med Monitor is will present this issue to the international community and to international human rights institutions in order to have an international movement against these acts. She also stated that the deliberate administrative detention of the Palestinian academicians is not based on legal foundation especially that the Israeli authorities does not allow for the detainee or his counselor to access to the details of the case file.

Al-Senwar pointed out that "the United Nations Committee against Torture" has repeatedly condemned the administrative detention by Israel as it is illegal and considered as a form of “collective punishment” perpetrated against the Palestinians. She also noted that the international laws and agreements of  human rights, particularly the Fourth Geneva Convention, criminalizes the arbitrarily deprivation of liberty of arrested persons and not to be informed  clearly of the charges against the persons clearly, and giving them the opportunity to defend themselves.