UNRWA measures against nearly 1,000 of its Gaza employees arbitrary and unjustified 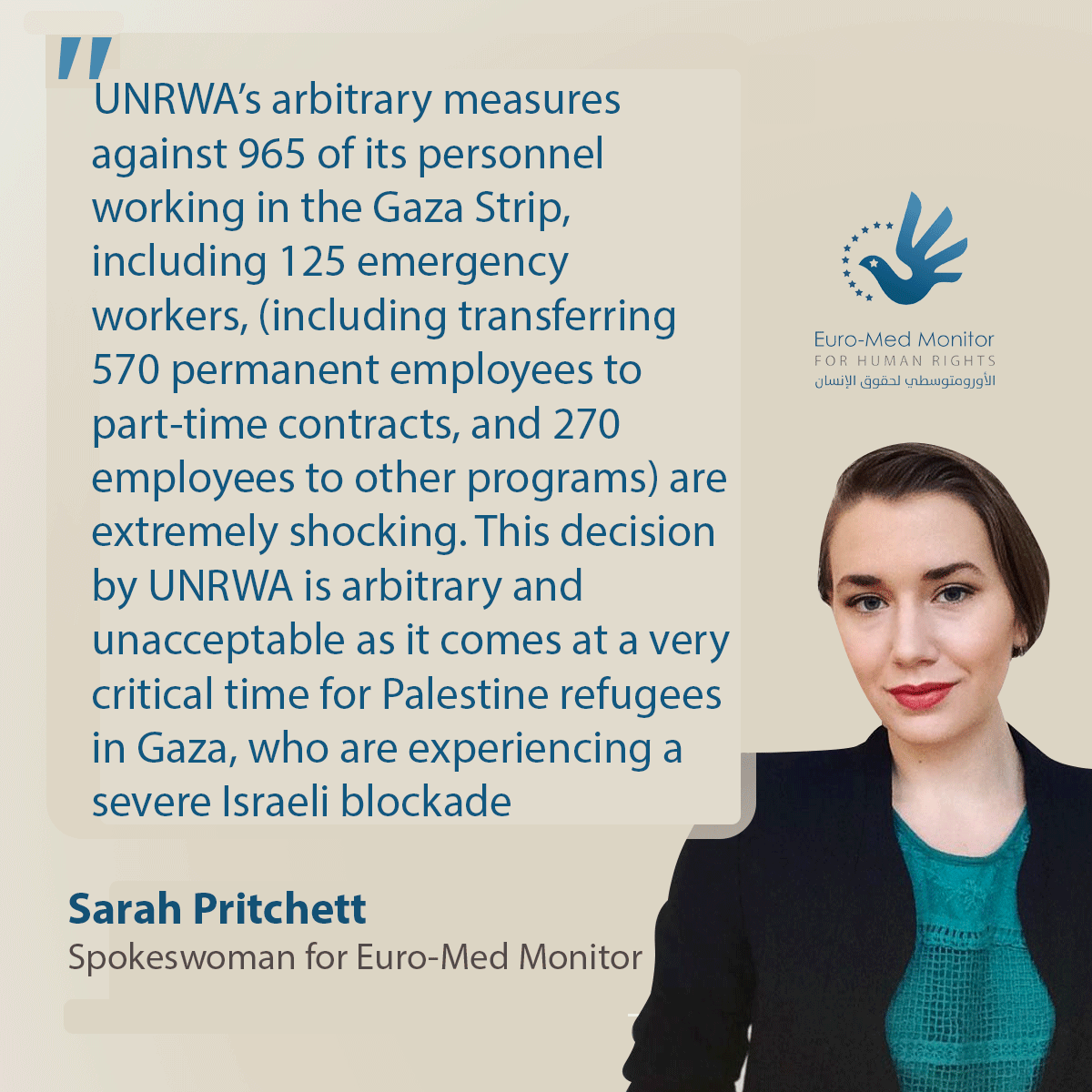 UNRWA’s arbitrary measures against 965 of its personnel working in the Gaza Strip, including 125 emergency workers, (including transferring 570 permanent employees to part-time contracts, and 270 employees to other programs) are extremely shocking, says the Euro-Mediterranean Human Rights Monitor.

Those transferred are likely to have their contracts terminated by the end of this year, employees are reportedly told by UNRWA.

This decision by UNRWA is arbitrary and unacceptable as it comes at a very critical time for Palestine refugees in Gaza, who are experiencing a severe Israeli blockade that has been choking them for 12 years now, stated Sarah Pritchett, a spokeswoman for Euro-Med Monitor.

Political and economic sanctions have recently reached their peak and have caused unprecedented life crises, with unemployment rates soaring to over 56% and power outages lasting to 18 hours a day under summer’s unbearable heat.

Thanks to UNRWA's decision today, hundreds of families are left to suffer the consequences. The decision had its immediate impact on those affected, many of whom fainted upon receiving the shocking news.

Dismissing this number of employees contradicts the recent statements made by the Agency's spokespersons, who spoke of a decrease in the Agency's budget deficit from $466 to $217 million.

The Geneva-based human rights group also expressed its grave concern over the use of sound bombs on Monday, 23 July, by security personnel escorting UNRWA’s Operations Director in Gaza Matthias Shamali to disperse a number of employees protesting the Agency's decision against the Gaza employees.

The organization further stressed the need to discuss this serious incident with the Agency and demand accountability.

Euro-Mediterranean Human Rights Monitor reiterates calls for the international community to take responsibility for Palestinian refugees and to support UNRWA financially and legally so that it could continue providing services until UNGA Resolution 194 is implemented, according to UNRWA’s mandate, with refugees’ return to their towns or compensation.