The Iraqi government should stop repressive practices against protesters, meet their demands 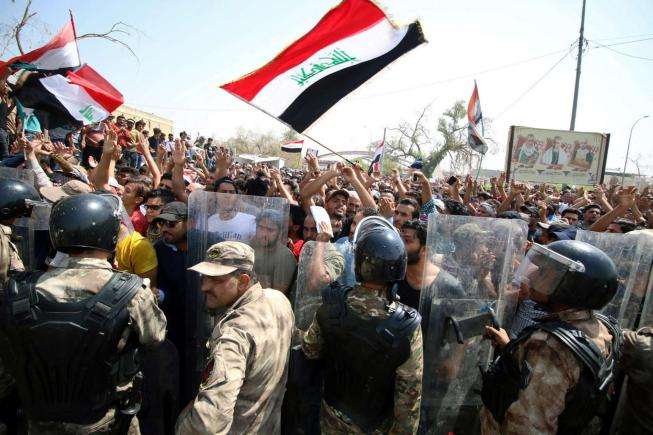 Geneva - Recent peaceful and popular protests raging across central and southern Iraq since early July have been met with unjustified repression by the Iraqi government, says the Euro-Mediterranean Human Rights Monitor.

The authorities used excessive force while dealing with protesters, arbitrarily arrested hundreds of them, tortured and forced others into disappearance, Euro-Med Monitor's team reported.

Instead of cracking down on peaceful demonstrators demanding basic public services, the Iraqi government should pay more attention to performing its duties towards Iraqis, providing basic services and ensuring a dignified life for its citizens, states the nonprofit youth-led organization.

The security forces have also fired shots in the air and detained some protesters who have been staging an open sit-in for 23 days, demanding the government to improve the living conditions in their governorate.

The Iraqi security forces used live bullets while repressing the ongoing protests in Baghdad, Basra, and several other areas in the country over the past two months, resulting in the death of at least 18 persons, most of whom died as a direct result of shooting.

Another 1,000 protesters have been detained, most of them have been later released. While in prison, they have been subjected to torture, beating, and humiliation by members of the security forces, especially in Mosul.

The Iraqi government has further cut off the internet and telecommunications in some Iraqi cities as public protests raged. Again, the internet was cut off another time on 14 and 15 of July, in a grave violation of the right to freedom of opinion and expression and the right to information.

To date, Iraqi activists still reportedly face difficulties when using the internet - they have to use digital encryption software to upload and download videos.

The Iraqi government practices are similar to the practices of other oppressive governments in the region, with their only aim is to conceal the reality of events in the country, states Sarah Pritchett, Euro-Med's spokeswoman.

Testimonies gathered by Euro-Med Monitor's team also confirm that the protests are only aimed at exposing corruption, demanding electricity and drinking water fit for human consumption, and finding a solution to the soaring levels of unemployment.

In a press release last Friday, the spokesman of Basra Council in southern Iraq Ahmed Al Saliti declared the governorate a 'disaster area' because of the increasing pollution, leading to the poisoning of many residents.

Pollution is further aggravated by the increase in temperatures, in addition to lengthy power cuts and shortage of medicine and medical services in the governorate. As a result, 18,000 cases of poisoning were recorded in Basra, according to the United Nations High Commissioner for Human Rights in Iraq.

Euro-Mediterranean Human Rights Monitor calls on the Iraqi government to heed the legitimate demands of protesters, to ensure Iraqis a dignified life, including by providing potable water and electricity, securing decent education and health services.

Euro-Med Monitor further calls on the Iraqi government to release detainees on the background of peaceful assembly, and to start an investigation into the violations committed against them, stressing the government's need to adhere to the international laws and treaties to which the country is a party.

The Iraqi government should promptly stop its policy of cracking down on protesters, activists, and journalists.