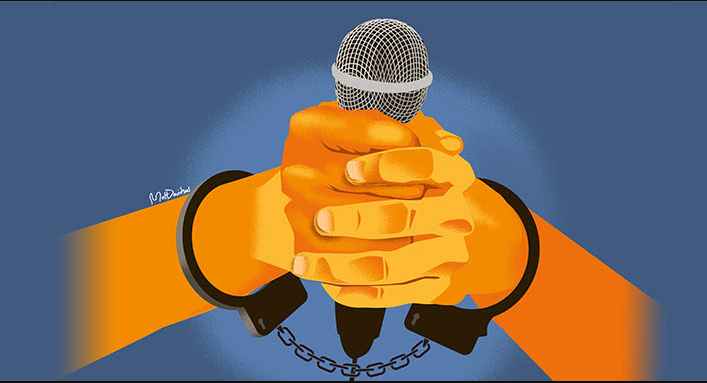 Geneva - A number of journalists have been attacked during a wedding ceremony by members of security personnel in Gaza. The incident, which took place last Thursday, was condemned by both, Euro-Med Monitor and Droit pour Tous

On Friday, March 9th, a security officer was seen aggressively pushing journalists while they were standing in the spot assigned to them in the ceremony. Trying to express opposition to the way they were treated, the journalists were met with beatings and abuse by some security members.

According to journalist Mohammed al-Mashharawi, a security man in civilian clothes ordered him to leave the ceremony and go to a security car at about 6:30 pm on Thursday, but refused to obey his orders because there was no arrest warrant against him.

He was detained in a dark cell for half an hour at Ansar Detention Center, west of Gaza. Then he was forced to take off his clothes and was beaten for ten minutes before being released, according to him.

Euro-Med Monitor has made several attempts to reach out to the high officials in the security services and the Interior Ministry of Hamas government, but has received no response to the attack on the three journalists working for Sky News and BBC Arabic.

Taher Nono, a government spokesman, said the incident was "a quarrel on a personal background," adding that the journalist Masharawi "quarreled with a security officer at the scene. Security men were, thus, forced to detain him for investigation”.

Meanwhile, Hassan Abu Hashish, head of the government media office, refused to present his government's narrative of the attack. He only said that an independent commission of inquiry had been formed to investigate the incident, which does not express the government's attitude toward journalists”.

The two Geneva-based organizations call for not delaying or impeding the work commission of inquiry. They also call for publishing their findings to ensure accountability for the assault.

With government officials trying to justify their position by describing the incident as an “individual act”, the members of security involved in the incident should be known, and legal measures against them should be taken.